Why I Love France

Quick. Think of a lovable culture. For most, the French do not come immediately to mind. I think I was French in another life. I am not embarrassed to state that I love France.

I’ve visited Paris and northern France a number of times. Last spring I traveled to the south of France for three weeks. I came expecting to love the landscape. After all, there was a reason artists such as Matisse, Picasso, and Van Gogh came here to paint.

The lovely light, the Cerulean blue skies, and the sparkling Riviera are renowned. To my delight, I discovered eight other reasons to love France and the French. A few may surprise you. They certainly surprised me.

1. The French are Quiet

If you have ever ridden on a bus or a train in New York or Italy, you’ll understand what I mean. Everyone in Italy who rides public transportation talks incessantly on their cell phones. Not only do they talk, they are loud.

No one is discreet. It’s much the same in New York. The difference is, in New York the trains and buses are so loud you have to shout to be heard. This is not the case in France. The trains are quiet. The buses are just as quiet. And, blissfully, everyone on board is quite respectfully quiet. Merci!

French children adapt to their adults, not the other way around. In the United States, parents adapt to their children. They take them to kid friendly, quick-serve restaurants.

Or, they don’t take them at all. If parents want to go out to a good restaurant, they get a baby sitter. Often American parents don’t take their kids out to a better eatery until they are teenagers. By then, the teenagers don’t want to be seen with their parents so families don’t eat out together much.

In France you see children eating out with their parents at all kinds of restaurants. They are expected to behave in a certain way. Not being French or fluent in the language, I am not sure how French parents make this happen.

But I saw it again and again. Many restaurants have outdoor seating and are set in small squares. When the children get bored they are permitted to run around the square in full view of their parents who can sit and enjoy a leisurely conversation over a pastis while their children entertain themselves.

Greece, Spain, and Italy are well-known for their olives and olive oil, but French olives are even better. The taste is deep, pungent, and fruity. Especially in Provence, olives are served with every meal either straight up or in tapenade; a spread made of pureed olives, capers, and anchovies.

I have no idea why, but France is not a huge producer of olives. The climate is perfect. It’s hot and dry which enables growth and enhances the flavor. French olives are stronger than Greek, Spanish, or Italian and only for staunch fans.

Much has been said and written about French wine. I am no expert and have little new to add, but I do like my wine and you have to love a place where a pitcher of delicious table wine costs a mere 4€. I love the manner in which wine is consumed in France.

I particularly love watching the mid-afternoon crowd amble in to their favorite café, order a glass of wine, and proceed to sit and discuss the day as though they had all the time in the world. Unhurried, unharried, at around 3 p.m., the French sit and sip and speak to one
another and they don’t stare at their cell phones.

I am mystified as to why the rest of the world can’t get this right. French breads have a crust that is crusty and an inside that is light, airy, and floats into your mouth. There are more holes on the inside than bread. It’s perfect. The best in the world, nothing more to be said.

Even though everyone in France seems to eat croissants daily, they don’t get fat. They don’t get fat because the pastry, like the bread, is more air than dough and most of it flakes away and never gets into your bloodstream.

French pastry melts in your mouth. It tastes as though you have doused it with butter, even though there may be nothing on it. When they do put something on it, like when it’s wrapped around an onion tart, it melds with the other ingredients and enhances the other flavors. The French are the pastry geniuses of the universe.

The French are die-hard cigarette smokers. France is one of the few places left where smokers do not seem embarrassed. They still act as if no identifiable harm will come to you if you smoke. Denial is rampant. From the young to the very old, the French smoke with a seriousness not seen anywhere else since the 1960s.

My three favorite smokers were so cavalier it made me want to light up. The first was a young teenage boy. He wore a shirt that said “All you need for a movie is a gun and girl, Jean Luc Godard.” The shirt, his young skinny frame, plus the cigarette dangling from his mouth, all made this kid appear to be coolness personified.

The second smoker was a twenty-something girl in a white tank top and black leggings. She wore more eye make-up than clothes. Impossibly pretty and thin, she sat in a café smoking with her friends as though nothing else in the universe mattered. She was very convincing.

The third was a woman of a certain age who was peddling down the street, holding on to her bike handles with both hands.

Her cigarette was balanced between her lips as she peddled and puffed her way through town. You had to admire her conviction and her addiction.

Voila! The markets! There are more markets in France than there are costume changes in a Lady Gaga concert. Each one is a feast for the eyes, the nose, and the taste buds. The best are in Provence in the summertime when produce and flowers thrive in the sunshine. The French know how to put together a market.

I did my utmost to visit them all. One favorite was Les Halles in Avignon which is one of the few indoor markets. In addition to the usual array of produce, meats, poultry and cheeses, here you can sample food which has been prepared for you. One memorable meal was the quiche I ate sitting on a bench next to an older Frenchman who was reading his paper in the mid-morning sun.

Aix-en-Provence has three markets in a single day within blocks of each other. One market, a riot of color and fragrance, sells nothing but flowers. The second sells a hodgepodge of flea market items. Here you can find a dazzling display of dishes, fabrics, and clothing.

The third, my favorite market here, was the food market where the endless stands of glorious produce, breads, rows of spices, onions, garlic knots, peppers, zucchini, local cheeses, and sausages seduced me to buy way more than I needed.

But then, nearly everything about France seduces me. Which is why I keep finding reasons to return.

If you’re traveling through the French countryside, get a rental car from our friends at Enterprise. 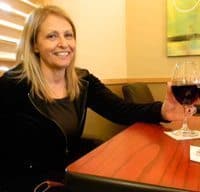 Tina J Gordon is addicted to writing, travel, and food. She has a blog (www.teethetrav.travellerspoint.com) where she shares her travels, her best food experiences, and some recipes. She is currently working on a young adult novel called Hardscrabble Road and planning a trip to Provence.

Love France? Get our France Plane Reader for dozens of stories like this for your Kindle.