Ecuador: Riding Above the Trees 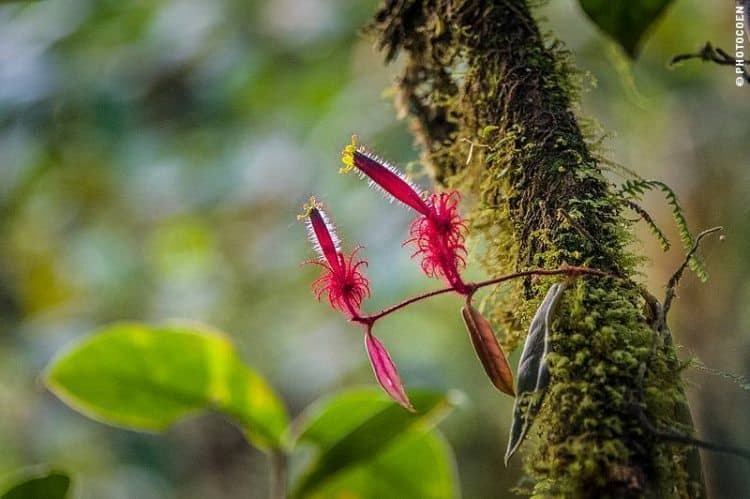 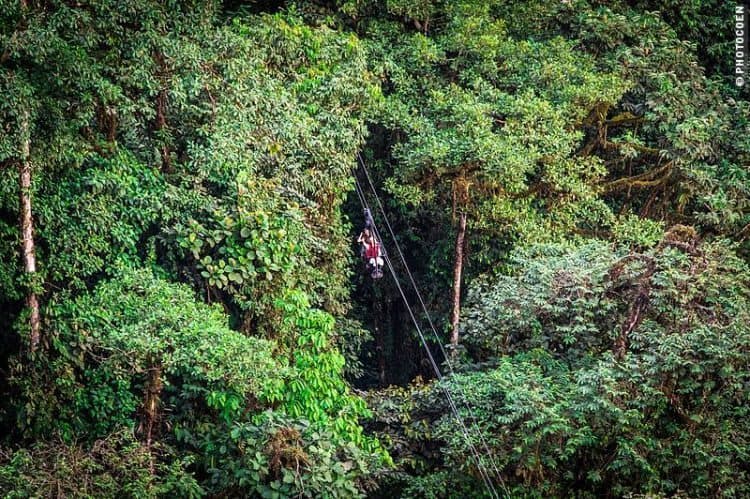 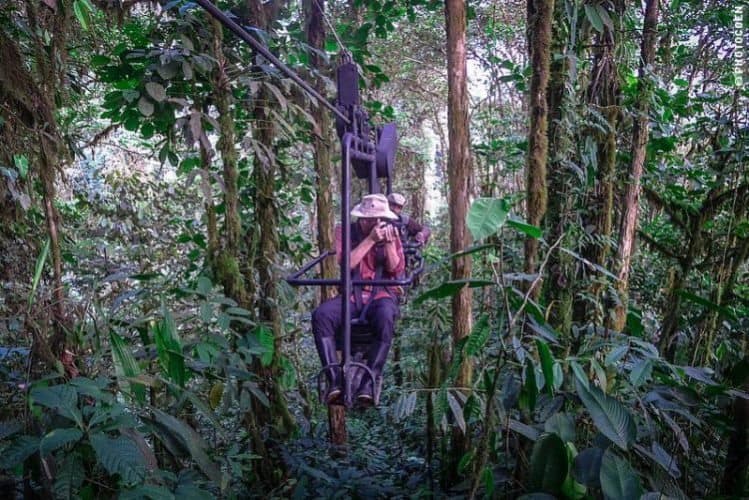 Sky biking above the forest in Ecuador. Coen Wubbels photos.

By Karin-Marijke Vis
“Ready? Off we go!” José, a guide, unchains the two-seater carriage with David, another guide, in the back and me in the front. David starts pedaling and all I have to do is to be in awe. The latter is not hard to do when you are transported along a 655-foot cable that at its highest point reaches 200 feet above a riverbed. We are cycling among 100 to130 foot tall tropical trees in the Mashpi Reserve, which lies at a 3-hour drive from Quito, Ecuador’s capital.
The Choco Forest

The 3,200-acre private reserve is part of the threatened Chocó Forest, which reaches as far as northwest Colombia (a region called Chocó, hence the name). Due to deforestation only 10% of this forest, which is renowned for its biological abundance, remains.

The Mashpi Reserve stretches from 1,800 to 4,500 feet above sea level. The lower part consists of Chocó Forest and the upper part is North Andean forest. As a result the diversity in flora and fauna within the reserve is enormous. Mashpi’s resident biologist Carlos Morochz told me that the forest has 60% more epiphytes (non-parasitic plants that grows on another plant, such as bromeliads and orchids) than the Amazon.
They have identified 400 bird species, 35 of which are endemic, and they have researched some 50 species of butterflies, 17 of which are kept and bred in the reserve’s Life Centre. Through a camera trap project Carlos is trying to determine how many mammals live here. Among the ones captured on camera thus far are pumas, ocelots, anteaters, agoutis, red tailed squirrels, pacas, colored peccaries, and margays.
Animal Life and Activities

In the middle of this extraordinary reserve lies the Mashpi Eco Lodge. One of the activities the lodge offers is the above-mentioned aerial bike ride. Other activities include hiking to waterfalls, visiting the butterfly Life Centre, early-morning bird watching from the lodge’s terrace, and walks either during the day or at night.
José, our local guide, demonstrated the wonders of the rainforest whenever possible. During our hikes we learned how locals treat malaria (palladium) with the verbena plant, how a certain spider makes its nest by rolling up a leaf and holding it in place by wrapping its silk around it, and that 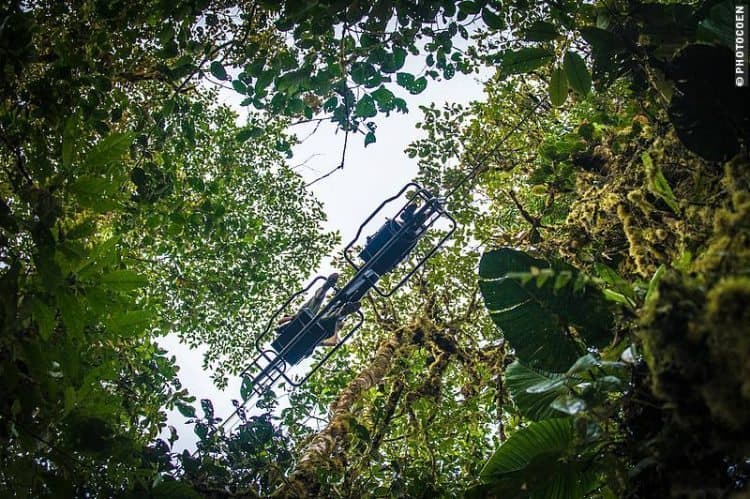 walking palm trees are called as such because that’s what they can actually do: walk (about three to four meters in their lifetime).
One of our favorite places was the hummingbird feeding area. The guides know of thirty species to live within the Mashpi Reserve and it is not uncommon to see a dozen different ones when visiting the feeding area. Who isn’t capitvated when watching hummingbirds? After all, it is the only bird capable of flying backwards, and it can stop in midair flight and hover still. Don’t bother trying to count the flapping of their wings as you won’t succeed; their average lies between 5,000-12,000 beats per minute.
Relax and Sunset
So there are a lot things to do and opportunities abound to see animal life, but the lodge also offers ways to relax. It has an indoor Jacuzzi – from the bathtub you have a splendid view of the forest – and you can treat yourself to a number of massages. Massages are given indoors as well as outdoors. I decided to give the latter a try, which took place at an open, forested spot with at the far end a waterfall tumbling into two pools. 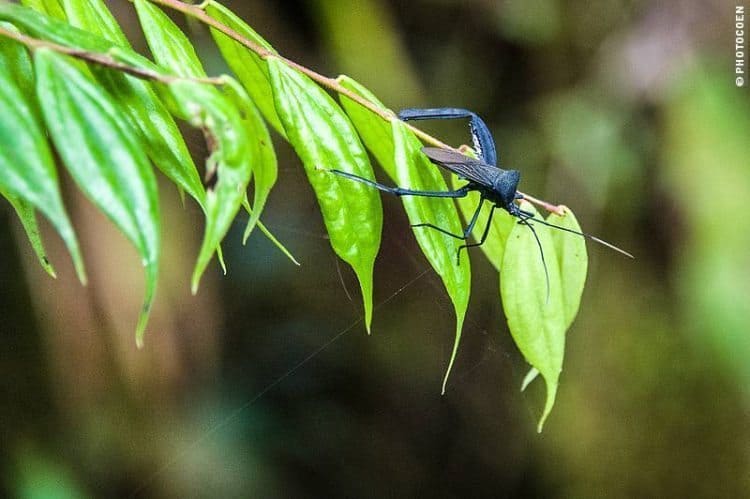 Insects in the forest. Karina, the therapist, gave me the full package: a soft massage with oil, another one to toughen me up – or so it felt – with bamboo sticks, and the treatment was finished by covering me in organic chocolate paste with a brush and wrapping me up in an aluminum space/rescue blanket. Ecuador has high-quality chocolate and it felt like an indulger to not just eat it but to soak up its nutrients through my skin.
In between the massages I took baths in the natural pools and despite the cold I felt the richest person on earth to be here, amidst mind-blowing nature in the company of twittering birds but pleasantly void of biting insects.
Another moment to feel so rich was when we watched the sunset from the 30-meter-high watchtower. While climbing the stairs Coen joked that they should serve champagne upstairs. As we reached the top David responded, “Well, we actually kind of have that.” It wasn’t champagne, but red wine. José had gone up before us and had laid a wooden bench with wine glasses, mini bread rolls and baquette with slices of cold cuts, cheese and brie. What a service.
While toasting the sun appeared from the clouds, a perfect round ball it was. While José and I simply took it all in, the photographers Coen and David discussed photography techniques to shoot the perfect sunset. We were in perfect company, watched an amazing sunset while drinking splendid wine. How much more can you want for your vacation?
‘Amigo del Agua’

The world ‘mashpi’ means ‘amigo del agua’ in Yumbo, a now extinct language of indigenous people that once inhabited the area. The reserve has important water sources, among which four rivers, and from my sky bike I can see one of the many streams traversing the reserve.
The aerial bike glides along trees covered in lichen, creepers, orchids and enormous bromeliads. Some of these can hold as much as 20 pounds of water, David tells me. No wonder these trees hardly ever grow older than 400 years. Because of all these plants living on them and because the trees grow on steep mountainsides, they become top-heavy and eventually topple over during heavy rainfall.
A creeper has found its way to the top of one of the trees, displaying its delicate red flowers. “Here, red and yellow flowers specifically attract hummingbirds,” David explains. “Other colors are attractive to certain kinds of insects.” We pass the ‘seven-layer-bark tree’ as it’s known here, which sheds its bark throughout the year, as well as a white tree that sheds only once a year.
When I look farther away, the view becomes even more imposing. On the left forested mountain slopes rise not too far from the aerial bike, and on my right numerous mountain ridges are covered in primary cloud forest. I am extremely lucky as for a large part of the day the world was shrouded in fog, which characterizes the cloud forest, but just before arriving here the mist started to recede and right now the sun is even trying to find its way through the clouds to provide me with yet another phenomenal sunset.
Fighting to Preserve the Choco Forest
From here it’s also evident what the world looks like after deforestation. In the distance are open fields and villages such as Mashpi village. Thirty years ago there were logging concessions here. When some fourteen years ago Roque Sevilla bought this terrain with the goal to preserve the cloud and rainforest, he talked with villagers and asked them to stop logging.
It took quite a while to convince them that he wasn’t going to log the forest himself but actually wanted to preserve it.
Little by little the inhabitants of various villages saw the good cause and not just stopped logging but became involved. Today close to 70% of the staff at the Mashpi Lodge is from the surrounding areas.
Yes, Again!
You know what the best part is of this sky biking trip? When we reach the end of the cable we stop, but the trip isn’t over. David turns the chairs around and we go back the same route!
Further information
– The construction of a two-mile long cable car is almost complete and will soon be open to visitors.
– The luxurious, contemporary lodge has 22 rooms and offers an haute cuisine based on Ecuadorian ingredients. Two or three-night packages include accommodation, transfer from and to Quito, all meals, outdoor activities with a naturalist guide and local guide. For more information check out the Mashpi Lodge Website. 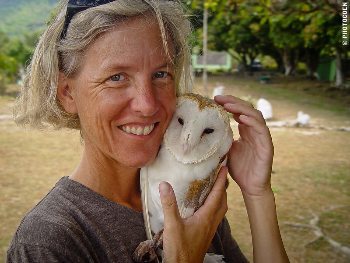 Visiting Ecuador? Rent a car for your trip from Alamo all over Latin America

Karin-Marijke Vis and her partner Coen Wubbels, photographer, have been overlanding in Asia and South America since 2003. They have been assigned the Overlanders of the Year Award 2013. They work as a freelance duo. Their work has been published in 4WD/car monthlies and in travel magazines. Follow them on landcruisingadventure.com and instagram/photocoen.

Karin Vis and her partner Coen Wubbels, photographer, have been overlanding in Asia and South America since 2003. They have been assigned the Overlanders of the Year Award 2013. Their work has been published in 4WD/car monthlies and in travel magazines.

www.notesonslowtravel.com
Like this article? Share it with your friends!
If we've inspired you to travel with this story, why not check out the prices to get there and make it happen. Search airfares, hotels, and rental cars here. Thanks!