“Let’s get off here,” my husband Tom said, as our bus slowed around a snow-covered bend. Comfortably warm after the 80-minute ride from Nagano station to Togakushi, I hesitated before following him. “Are you sure?” He motioned his answer, pointing toward the torii gate that rose a few hundred feet from where we soon stepped off the bus.

I recognized the shrine entrance from the photo online, the rectangular arch, the naked wood neither stained nor painted the fiery orange of so many we’ve walked under during our year and a half in Japan.

Togakushi-jinja is not one shrine, but three. We hoped to hike the six kilometers or so of trails from the lower shrine, Hoko-sha, to the middle shrine, Chu-sha, and finally up a path forged between ancient cedars that leads to the upper shrine, Oku-sha.

“Actually, we should’ve gotten off sooner,” Tom said. “This isn’t the first shrine, but we can stop by it on our walk back.” His confidence was comforting, despite his struggle with the map as it played in the wind. Snowflakes fluttered around us, adding to an already thick layer of snow, so much more than we’d expected.

Tom had mocked my proposal to rent snowshoes. How Japanese of me – to overgear. When we moved to Japan the previous summer we were baffled by runners decked out in long sleeves, gloves, and tights (though they probably felt the same about us, silly Americans not protecting our skin from the scorching sun). When trail running, we often pass hikers prepped for Everest or another extreme — women primped and primed for a date, climbing the steep slopes in heels.

My Japanese students had asked when I told them we were heading to Nagano. “Nope. Visiting Togakushi.” “So, so (yes, yes) … to ski?” “No, to visit the shrine.” “So, so, so,” they’d say, their nods of understanding often followed by stories of how beautiful Togakushi is during the summer and especially lovely during the fall. The vibrant foliage.

Too much snow, the Tourist Information clerk at the train station had told us when we asked about the roundtrip bus ride to and from Togakushi. Avalanches, she warned, pointing to the area on the map  we’d hoped to hike.

A warning Tom balked on our way to our hotel – Matsuyara Ryokan — where we dropped our bags before exploring Zenkoji, the temple famous for housing what is believed to be the first Buddha statue brought into Japan, the sacred grounds around which the city of Nagano bloomed.

Later, we followed the traditional, albeit curious, multi-course meal at our hotel with a nightcap in the shwanky candlelit lounge at Hotel Fujiyama.

Puffy snowflakes had fluttered around us as we walked back to our ryokan. How whimsical they’d seemed then. I Told You So We’ll be fine, Tom said again this morning when we woke to a world of snow.

After all, the ground was white in the Fotopedia shots that had caught his eye and made him pause long enough on Flipboard to realize the shrine was not just a beautiful destination to add to our bucket list but actually within our reach. I held back a laugh when a blocked path greeted us a few feet past the snow-topped torii gate.

The sound of drums thrummed through the air from within Chu-sha Shrine. A crisscross of thin bamboo Xed out any attempt at the steep, icy stairway up to the shrine.

Our shoulders sagged until we spotted an alternative path of steps dug into the packed snow that led us up the hill to the main hall. There, the steady beat of drums called my pounding heart to slow.

The winged roof wore a cap of snow, the small grounds and surrounding trees a blanket of white.

Even if we only saw this shrine and heard these drums, the journey was worth it. This warm feeling faded when we were thwarted time and again by trails ending in piles where the snow blowers had given up.

Not wanting to backtrack again, Tom looked back at me, huffed, and high stepped one leg into a bank of snow, only to sink in to his knee, earning a wet pant leg. The ire in his eyes as he huffed past dimmed my urge to I-told-you-so. But if we were wearing snow shoes and ski pants instead of jeans, we’d be tromping through the forest, rather than trudging up the hem of the 36, weary of cars that raced by, dangerously fast on the icy curves.

Surprised to find a restaurant actually open, we paused along with a group of hikers — one girl surprisingly underdressed in shorts and tights – for soba, the buckwheat noodles the area is known for. (Much like a New Yorker boasting about bagels, one of my students revealed that the water is what makes the area’s soba so special.)

Outside the low A-frame building, we followed the group’s lead, brushing off our jackets and jeans with small handheld brooms, then stomping our boots on the mat before entering the warmth of the restaurant, Soba no Mi. The far wall of windows made the room seem all the more open, as if we were actually dining al fresco, surrounded by shivering trees and mounds of snow.

Soon our soba arrived, my noodles swimming in steaming broth, Tom’s looped in ovals on a wicker mat, cold and waiting to be dunked in the pheasant and vegetable soup that boiled in a small hot pot, over a small flame.

Much More Than a Hike

Bellies full, bodies warm, and minds eased by nama biru (draft beer) and atsukan (hot nihonshu, or sake), we stepped back out into the snow, hoping our faith to trudge on would be rewarded by finding the final trail unblocked.

Thirty minutes or so later, the kind-of-cleared path we found did not feel like a reward. The fresh snow as difficult to trudge along as a duney beach; the gradual mountain ascent made all the more difficult by our extra layers and bulky snowboots. A family snowshoed past us in the opposite direction, moving so swiftly. Sigh.

Even at high speed, I felt like a waddling stuffed penguin. We’ve been walking for 15 minutes and only made it this far, Tom said when I caught up to him. I looked back. The torii entrance to this final shrine seemed much too close, while up ahead trees sandwiched a path of white without end… until finally, finally, after more trudging, red interrupted white in the distance.

The red Zuishinmon Gate looked more like a doorless house we could pass through, but not without paying respect to the intimidating spiritual guards, armed with arrows, encaged on either side. Once beyond their thatched roof, we found ourselves under another – a canopy of ancient cedars. This other realm moved us to pause and crane our necks, trying to see where, if ever, the treetops met the sky. We walked on this way,  lowering our heads long enough to roll out a kink and then peer up again.

I wondered if we’d walked through a wardrobe rather than an ancient holy gate; if soon we’d be stopped by a sleigh and a frigid finger offering Turkish delight. Though walking forward, I’d surely slipped back into that place of innocent wonder, when such magic seems not only possible but not even magic at all.

The path narrowed as we left the cedars behind, narrowed and ascended, so steep, we’d realize later that what we thought was a hill was actually a staircase frozen over.

I huffed and steamed and soon unlayered, removing my hood, headband, and neckwarmer, even the hand heaters I’d stuffed in my gloves. This will be so much scarier on the way down, I squawked, heaving my tired legs to the top of the slippery path, only to be shushed by Tom.

How rude … I realized I was being once I looked up to see that we were not alone. Slightly crouched, head reverently dipped, a man prayed before small stone carvings tucked into the icy mountainside, his steady incantations undeterred by my voice or the loud crunching of our steps behind him across the snow.

I wondered what he prayed so ardently for with his eyes clenched, his shaved head exposed, naked hands clasped. His chant ever-consistent and unbroken despite the chill.

His guttural repetitions sounding not as much from memory but pouring out from deep within. For the second time that day, my racing heart slowed to the thrum of another’s belief.

We carefully began our descent, the previous chill now replaced by the rhythm of the man’s chant reverberating through my bones. If you go: For more information about the legend of Togakushi, directions, and other helpful information visit Japan Guide. 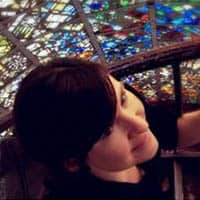 Breawna Power Eaton’s tales of getting lost and unlost in love, life, and travel (in Japan and throughout the South Pacific) can be found on her blog Lady Seeking Adventure.