Hiking through the Prairie in Gainesville Florida: Wild horses and lots of gators on La Chua Trail

As a college student in Gainesville, Florida, I never made it to Paynes Prairie. The first time I really became cognizant of the sheer size of the savanna was when it was on fire. I had just returned to Gainesville after two and a half years living abroad and it slowly seeped into my overwhelmed consciousness that there was a permanent haze enveloping everything.

I started to notice the acrid smell of smoke and bits of ash: a blazing wildfire was consuming the prairie. The city was so hot at that time that if you left the air conditioning off for the afternoon, the doorknobs would be hot to the touch.

Eventually, the flames were quelled and years passed before I thought of the place again. This time, it was in the Gainesville Photography Club when I noticed a disproportionate number of exquisite shots were coming from the same spot.

Little Trail on the Big Prairie

It would not be a stretch to describe the 21,000 acre Paynes Prairie State Preserve as the Everglades of North Florida. With this analogy in mind, La Chua is its Anhinga Trail.

The Crackers were the first Western settlers and cowboys in Florida. Inconspicuously tucked away in the northern entrance, it is not part of the main state park, which comes as a surprise for such an extraordinary wildlife viewing area.

The Gainesville-Hawthorne multiuse trail links up directly with the trail head making it a dream for outdoor enthusiasts. Each visit is a new adventure as the park is teeming with wildlife in all seasons including wild Florida Cracker horses and American alligators.

Cycling through Gainesville, the first rays of dawn break the horizon as I connect with the Hawthorne Trail. The trail is shaded by the huge arches of tree branches and lined with the beautiful fronds of saw palms.

Fog rises from the forest floor and the aroma of dewy foliage wafts through the air.

Golden beams of light shine through the leaves of oak trees festooned with Spanish moss. Cardinals hop from branch to branch and in the bushes, some wild turkeys skulk away.

White tailed deer and rabbits pause to glance at the cyclists as they ride past barely concerned about their presence.

At the entrance stands a concrete train trestle which used to be part of the Florida Southern Railroad. It now serves as a kind of gate, its mouth yawning open into another world which hearkens back to a bygone era.

A small tree frogs suns itself on the fence of the observation deck. The prairie is full of micro-fauna as well as mega-fauna. “The Great Alachua Savanna” which William Bartram wrote about it in 1774 in his flourished style bordering on fantasy, has been left more or less intact. On one side a vast expanse of grassland peppered with wildflowers unfolds. Here, wild Florida Cracker horses and their foals can be seen grazing.

On the other side of the trail is the black marsh where dozens of enormous alligators laze on the shore or prowl about.

This is the location of the Alachua Sink which is a mysterious “drain” that, when plugged, turns the entire prairie into a lake. Herons stand fishing next to the drain as water is audibly slurped into a subterranean void. Moorhens glide past the purple pickerel weeds and egrets stand elegantly among the pale yellow lotus blossoms.

An alligator the length of a pickup truck drags his enormous body across the muddy trail to the water’s edge. When he gets to the other side, he raises his head to the sky, expands a huge flap of skin beneath his jowl and lets out a spine-tingling “GROAR”…repeated multiple times just in case you weren’t sufficiently terrified. Nearby, a yearling alligator with its stripes struts across the path as well, seemingly unaware of its diminutive size.

I hear two voices approaching: my husband, Noah, and our friend, Chris. We greet each other and drink some water as the sun is starting to get unbearably hot already at 8:30 am.

The sole of one of my shoes came loose in the mud and is now flapping around like a flip flop, attached only by the toe. Noah hands me a plastic grocery bag which I use to tie around the entire shoe to hold the sole in place. Amazingly, this trick actually works and we continue on toward the observation platform at the end of the trail.

We walk right next to gargantuan lotus blossoms and get ankle-deep in mud before finally completing the three mile trail. After taking in some of the panoramic view of the prairie and resting for a spell, we turn back to head home.

This winter I’ll be looking out for the roseate spoonbills, whooping cranes and other migratory birds. Perhaps I’ll even join some of the free ranger tours, making up for all those years I didn’t know about the many wonders of Paynes Prairie and La Chua Trail. 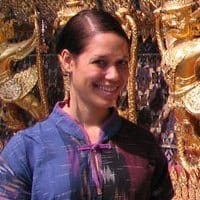 Nicole Gilbo is driven by an intense curiosity and she hopes to bring a deeper understanding of our humanity through travel and stories. She lives in Gainesville FL, and has been to 22 countries around the world and enjoys hiking and cycling. Read her blog.