It’s a two-hour drive from Cancun’s hotel zone on straight roads through dense Yucatan jungles and dusty Mayan villages to the ferry in Chiquila that takes you Isla Holbox.

Pronounced “Hol-BOSH” with that familiar Mayan soft X, it’s one of the most famously laid back places you can find in Mexico. It’s hard to imagine more of a contrast with Mexico’s famously kitschy top vacation destination. To some, it’s the anti-Cancun.

We had a choice of several islands to visit after a business trip to Cancun—Isla Mujeres, Cozumel, or Holbox. It did not take us long to realize that we had made the right choice in choosing the smallest of all these Islands in the Quintana Roo state in Mexico’s Yucatan Peninsula.

Holbox has less than 1000 inhabitants but in the high season in July and August, the population swells to just under 4000. There are 28 hotels, many of which have just seven to ten rooms. There are virtually no cars, all of the taxis are golf carts instead.

The Ferry from Chiquila

The ferry departs every hour from Chiquila, where a fleet of needle-shaped fishing boats ventures out in the ocean every morning with long bamboo fishing roads jutting out in front.

As we waited to depart Holbox on the first scheduled ferry trip at 7 am we watched the fishermen’s small boats zoom out into the blue. We knew there were lots of fish out there because we had spent the day before catching them ourselves.

In a place like Holbox, the attractions are simple and the option is always there to simply lie in a hammock and read or snooze. Willi Torfer, a beefy Italian runs VIP Holbox Tours has been a resident for 16 years and commands a small empire, one of the island’s largest tour operators. He takes visitors out on three different excursions.

The most popular of these are swimming with the whale sharks that live a few hours boat ride offshore. He can also show you the island by land and has tours that keep closer to shore to observe the flamingos who take up residence here before taking off during the winter months.

We were primed to experience swimming with these huge plankton-eating behemoths, which can grow to a staggering 40 feet long, but the weather kept us close to shore. It was the close of the whale shark season, and the weather wasn’t cooperating.

Willi said that with winds gusting to 31 km, we would have been bobbing in the 22-foot open boat amidst big waves and he pretty much guaranteed that we’d all get sick.

It’s quite a long voyage, a solid 90 minutes heading toward Cuba to get to the areas where the whale sharks can be found, about 35 miles offshore.

“Nobody knows where they go when they leave Holbox,” said Gustavo Morett, Willi’s right-hand man. You can’t keep tracking devices on them because they dive too deep and they fall off.”

So despite all of the cetacean expert’s knowledge, these massive fish remain an enigma that returns each year to the waters off Cancun and Holbox but then remains pretty much a mystery.

If you ever get to Holbox, be sure to book this excursion, just take the anti-seasickness pills they hand out because being a little tired is much better than puking overboard during a rough ride.

A Fine Plan B

After Willi delivered the harbormaster’s bad news nixing our whale shark swim, he said he had a plan B. It turned out to be a wonderful day’s fishing excursion that I’m happy to have experienced.

Most of the members of our group popped a Dramamine pill and in about 30 minutes were nodding off as the outboard motors chugged along in the bright September sunshine. And don’t forget your sunscreen!

When it was time to go fishing, I was all in. I love fishing, not so much because of the actual fishing, but more because it’s a ritual that leads to other great things, like spending the day on a boat, eating the freshest fish imaginable, and the camaraderie of fellow fishermen and the stories Catching a fish without a rod or a reel. that are shared.

After we had motored about an hour out, Gustavo’s captain Pablo Avila Arguelles, stopped the engines and he threw an anchor overboard into the water about 6 meters deep. We set the anchor and got ready to fish.

Gustavo prepared the lines—he doesn’t use any poles—he simply baits a hook with small baitfish and a weight and hands a spool over to reel it in. Our baited lines sunk to the bottom, which on the dept finder showed were about 30 feet deep, with a mostly grassy bottom with a limited amount of coral. These guys don’t use fish finders, they just know where to cast their lines.

Fishing in the Sun

As the lines sank deeper into the water and the sun beat down hard, we spread on the sunscreen and I began to feel the fish nibbling around the bait.

Then I felt a tug that turned into a pull, and in seconds I had hooked my first fish!

I began pulling the line in hand over hand, winding it back onto the spool as the fish fought the hook and zigzagged in the water. When the line reached the surface we could see the shiny flat prize, a snapper, or pargo.

We fished for about an hour and in that time hooked 15 good looking fish of between 9 and 12 inches, five varieties in all including snapper, grouper (mero) and grunt (chac-chi). They were all perfect for making ceviche, the region’s famous raw fish cooked without benefits of any flame or heat.

On the floor of the boat, the fish piled up, gasping their last breaths, some of them showing their sharp teeth as they expired. I felt bad for the fish that had died for us, but I couldn’t wait to taste them!

We sped back toward the shore of Holbox and motored through an opening that slices the narrow one-kilometer island in two, a brackish channel with nothing but beach and shorebirds all around. Going around a bend, we saw four more boats pulled up on the beach.

“We used to be the only ones here,” said Gustavo wistfully. But there was plenty of room for all of us. We climbed out of the boat into the warm, ankle-deep water and photographed birds while the captain and Gustavo set to work making ceviche.

First, he cut the beautiful fish into filets, deftly slicing away the skin and tossing it overboard to the eager flock of seagulls hovering overhead.

While the captain filleted the fish, Gustavo began chopping up onions using an intriguing little green cutting box. In go the veggies and wack! a perfect dice into a small plastic box.

Then tomatoes were prepared, and as he tossed their seeds into the water, they were quickly swallowed up by catfish or plucked from the sea by the gulls. Nothing was wasted; there were takers for every scrap he tossed overboard.

The glistening fresh fish filets were placed in a tub filled with the juice of 12 limes. The captain added some water as he added more filets to lessen the acid a bit. “You only have to marinate them for around ten minutes but if you have too much lime, it can be bitter,”

Gustavo told me. Right beside the Roma tomatoes, purple onions, fresh cilantro, salt, pepper, fish and some olive oil. The captain took a handful of round hot habanera chile peppers and sliced them thin, but he did not add these to the ceviche. They were put into a separate bowl so that people could parcel them out in small quantities—they’re pretty darn hot, as we discovered.

The little green box that Gustavo used to quickly dice the vegetables weren’t used for the fish; these were diced and sliced into equal-sized pieces by the captain on his cutting board. All five species were mixed in; each of the filets had turned white after the acid in the lemons had ‘cooked’ them perfectly. 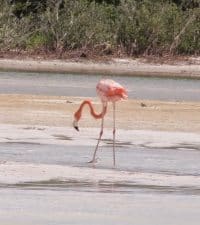 After the cilantro was added in with the juice of a few more limes, the big tub was all mixed together and bags of tortilla chips were passed around, the chips made the perfect spoons.

Bowls of the ceviche were gladly accepted, as were small cans of Mexico’s prized soft drink—Coca Cola made with sugar instead of corn syrup.

We shifted positions under the shade of the roof of the boat to try and minimize our sun exposure—and gratefully dug into what turned out to be the most delicious ceviche I’ve ever tasted. How could it not be?

We had reeled in the fish, we had watched it being prepared, and now each bite was an exquisite reminder of what we had done that day. As so many chefs will tell you, sublime food starts with the freshest ingredients and having seen the wriggling fish just minutes before, it just couldn’t get any better!

You can enjoy swimming with the whale sharks from June through September in the Yucatan, by Sept 17, no permits are issued to go out and see them. Soon after this, the creatures depart for their winter home, wherever that is.

The cost for a half day’s excursion including lunch, fishing and snorkeling is $80 per person with a six-person minimum.

A shorter version without snorkeling is $50 each.  The trips for fishing and viewing flamingos with VIP Holbox Excursions run year ‘round.

In Isla Holbox, we stayed at the Villa Flamingo, with individual thatched cabanas and beachside accommodations. The water is very shallow so swimming is done in the pools and the ocean is more for sitting in or kayaking across. You can get to Holbox by shared van, it’s a two-hour journey and the ferry runs hourly for 70 pesos.

This trip was sponsored by Cancun tourism but the opinions are that of the author.