A Country with a Horseback Tradition, trekking to Song-Kol Lake over the Jalgyz-Karagai pass

Kyrgyzstan is a country deeply connected to the traditions of horseback riding. Kyrgyz people are raised in equestrianism like Canadians are raised in hockey.

They sometimes learn to straddle a steed long before they can even walk. Traveling to Kyrgyzstan, a place so profoundly connected to horses, we knew that we had to plan a trek on the back of these nationally revered animals.

When we arrived in Kochkor, a small village in Kyrgyzstan’s rugged North, we went straight to Shepard’s Life office. Shepard’s Life and CBT are community-based tourism projects that you can find all over Kyrgyzstan. They arrange everything from guides and drivers to homestays and meals.

We usually booked our trips in Kyrgyzstan with a local group because they give a large number of profits back to the local communities and they help to encourage sustainable growth of tourism in the country.

We met with the owner of the office in Kochkor and she quickly helped us arrange the best route for our horse trek. We planned on a 3-day trek over the Jalgyz-Karagai pass and down to the beautiful Song-Kol lake. She set us up with a guide and three horses that were to meet us the following day. We went back to our homestay and packed our bags, excited for our next big adventure.

The Day Of The Trek

When we woke up the next morning, the sky was dark. Deep, bellowing thunder warned us that today was a risky day to venture into the mountains. We tried to ignore the somber weather as we packed our bags and headed outside.

Our guide, Ascot, met us right on time, but he was with an old beat-up car and a groggy driver rather than three willing horses.

He explained to us that the horses were in their stable about a 1-hour drive from Kochkor, so we hopped in the car and were on our way.

As the tiny rusted car clunked and hopped over the bumpy Kyrgyz roads, the skies started to close in and it became obvious that rain was on its way.

We told Ascot that we may want to cancel the trip to Song-Kol lake, but he assured us that the rains would hold off… so we continued.

We drove through a small village, where kids were playing in the streets. As soon as they noticed foreigners passing through, they quickly waved and yelled hello.

Despite the relative popularity of this trek, few people visit Kyrgyzstan at all, so no matter where we were in the country, we were always greeted with pleasant surprise and curiosity. We pulled into the stable house and met our horses while a group of giggling children surrounded the action.

My horse was a large, black stallion, so Dariece named him Denzel Washington, while hers was a smaller orange horse with a golden mane. She named it Mustard. After loading up our bags and mounting our new equine companions, we were on our way.

Starting Out: How to Get to Song-Kol Lake

Just being on the horses felt great. We’ve done a few trips on these animals in the past, but never for such an extended period of time. Today we planned to ride for 5 hours before arriving at a small yurt camp at about 3,500 meters in altitude, close to the Jalgyz-Karagai pass.

Somehow, despite the clouds in the distance, the sun continued to find us and its warmth was welcomed on our faces. Light pierced through the clouds and lit up the green grass around us, while the horizon was painted in a dark and dismal mist.

We road through lush pastures, down into river valleys and through a couple of small villages before starting our ascent towards the icy peaks of the Song-kol ridge. The sights were spectacular but the cool air and howling wind warned us that our views were about to change.

Finally, after four hours of riding, the skies could hold off no longer and they finally released their freezing contents. The rain was accompanied by tiny hail balls and we were soaked within minutes. Luckily, just as the weather started to punish us for ignoring it, we saw a scattering of yurts on the horizon.

“Is that where we’re headed?” I asked Ascot over the howl of the wind and the drumming of the rain.

Denzel Washington and Mustard seemed oblivious to the falling rain and they got us to our yurt-stay safely. We hopped off of the soaked and exhausted animals and ran into the nearest shelter where a family awaited us with cheese, homemade soup, freshly baked bread and delicious tea.

That first night we sipped on the warm brew and spoke to the family through Ascot’s translations. They told us of wolves, of their “summer homes” and of their children, who chased chickens outside as we talked.

We dried off in the warm sanctuary of the yurt before Ascot prepared our bed of wool blankets and pillows on the floor.

We slept comfortably, serenaded by the sound of grazing horses and the crackle of burning cow manure in the stove. Our thoughts were on the weather on that first night and I think we were all silently wishing for clear skies in the morning.

We awoke at 5 am on our second day of the trek and our bodies were slow from the chill. The cow manure stove had run out and we were happy to have 4 layers of warm blankets on top of us, but we didn’t want to come out of our cocoons until Ascot lit the fire again.

He did so, and we enjoyed a delicious breakfast of porridge, homemade jam, bread, and tea before saddling up and bidding farewell to the family who had so graciously hosted us for the night.

The rain returned shortly after our yurts disappeared behind us. Luckily it was only a sprinkle, but I’m sure that Denzel and Mustard appreciated the cool mist as they puffed and grunted their way up the rocky mountainside.

After about 2 hours of steep riding, Ascot pointed ahead and yelled back to us “You see that opening where the trail leads? That’s the pass!”

We gave our horses a light heel of encouragement and called out to them “Tshoo” (GO! In Kyrgyz).

The rocky pass became steeper and steeper and our horses were slowing down with each step, despite our constant words of motivation and definitive pokes into their lower rib cages, they were quickly tiring.

Suddenly and without warning, the clouds completely disappeared and we were treated to a bright blue sky. Denzel and Mustard slipped and skidded up the jagged cliff side but we made it to the top of the pass safely.

On Top of the World

The views from the pass were spectacular. We could see where the steep windy trail meandered its way down the mountainside before meeting the dazzling Song Kol lake in the distance.

The sun glimmered off of its rippled surface and even from way up at the top of the pass, we could clearly see its vivid colors and sandy shores.

We had about 10 minutes at the top before it was time to get back on the horses and head down. A dense fog crept over the ridge and we were quickly engulfed in an opaque mist that made it almost impossible to see Ascot and his horse trotting in front of us.

We arrived at the bottom of the trail after another hour of riding, the cool wind from the top of the pass still left a numbing sensation on our faces.

The dense fog had lifted and we were trotting along at a good pace, despite Mustard’s refusal to listen to Dariece. We followed the lakeshore for about an hour before arriving at our second yurt stay.

A Perfect Round Lake

The lake itself was stunning, a perfect round pool set amongst the beautiful Borbor Alabas and Moldo-Too mountains. Its glass calm surface is famous for reflecting its snowy peaks. The yurts where we were to sleep that night were scattered over a perfectly green pasture, or jailoo in Kyrgyz, with the jagged white cliffs scraping the sky in the background. The place was heavenly and it felt like we had discovered it for ourselves, though a few other tourists joined the camp that evening.

We spent another night with Ascot, chatting and learning about the unique Kyrgyz culture. He explained to us how he hopes to one day kidnap his girlfriend and make her his wife, a common and controversial custom in Kyrgyzstan.

We drank a couple of beers and played cards by the heat of the stove before retreating to our beds on the floor for another peaceful and silent night’s sleep.

Early in the morning on our last day, Ascot was saddling up his horse and tying Denzel and Mustard in tandem behind it. He was to ride back alone, 12 hours in one day, all the way to the village with the horses’ stable.

Dariece and I would take a taxi along the bumpy mountain roads to Kochkor. We bid Ascot farewell and watched as our trusty guide and three loyal horses disappeared into the mountains.

We were sad to see Ascot go, but happy to be free of the hard saddles that had so battered our inner thighs and butts. We hopped in the taxi and took the winding, gravel roads back to the comfort of our village homestay, where we ate a warm home-cooked stew and talked about the amazing things we had seen, and the friendly people we had met on our overnight horse trek in Kyrgyzstan. 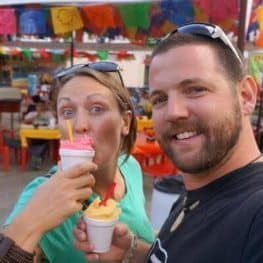 Nick Wharton is half of the nomadic couple behind Goats On The Road, a website designed to help others live a financially sustainable, location-independent lifestyle. Masters at making money abroad and traveling forever, they’ve been on the road for over 4 years and have traveled to some of the least visited places on Earth, finding adventure wherever they go.