Burma: Impressions of the Golden Land 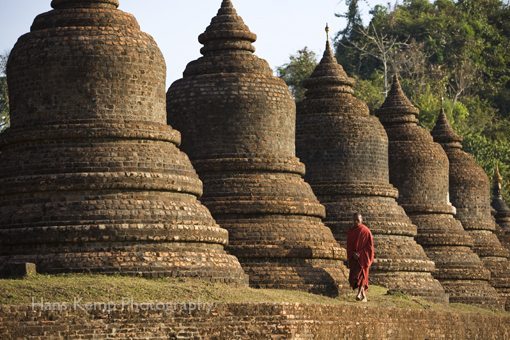 Shining a New Light on Burma 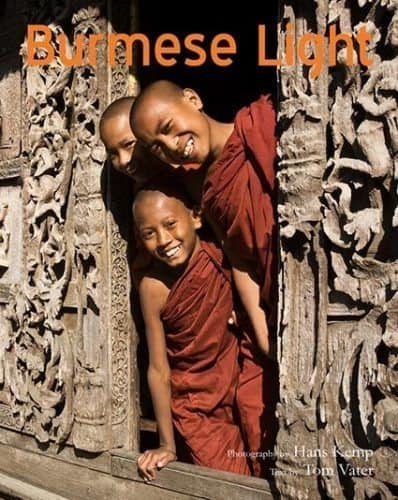 Burmese Light: Impressions of the Golden Land (Burma – Myanmar) is a photographic introduction to Burma or Myanmar, as the country is currently called, the mysterious land behind the Bamboo Curtain. Stunning images by award-winning photographer Hans Kemp, paired with an insightful text by well-known author Tom Vater, take the reader on a journey through a fascinating country slowly but steadily emerging from a long period of involuntary isolation.

The 208-page book features all the country’s famous sights, its colorful people and its multitude of customs, and leaves the reader with only one wish: to pay a visit to this amazing Golden Land.

An Excerpt from Burmese Light: A Visit to Mrauk-U

Sittwe, the capital of Rakhine State, lies in the far northwest of Burma, right on the Bay of Bengal. Bangladesh is close. Foreigners have to fly here and it’s my first glimpse of what’s also known as Arakan, land of legendary empires.

The British established their first colonial capital here in 1824, following the first Anglo Burmese War, but most of the Raj splendor was destroyed in World War II. Yet Sittwe is fascinating if dilapidated jewel of a town and entering the market is like a spot of time travel. Rakhaing, Muslims, Indian Hindus, and Burmans crowd the narrow passageways.

Produce from rice to textiles and plastic toys from China are crammed into small stalls. The fish market faces the Bay of Bengal and Rohingya fishermen pull in with their boats to offload their catches, including huge rays, trevally, and sharks.

Sittwe also serves as the starting point of an amazing day-long forty-mile journey up the tidal Kaladan River to Mrauk-U, an ancient royal capital, which ruled Arakan from 1430 to 1784. I am lucky, I catch a ride on a fishing boat that’s converted to a vessel transporting passengers up-river. The ship has a roof to shelter me from the incessant rain and enough bulk to be able to plow through the heavy chop during the first few miles of our journey.

A Thousand Shades of Green

Verdant rice fields line both sides of the river in a thousand shades of green. The land is completely flat and barely above sea level. As we move up the delta, low, dark mountain ranges rise from the expanse like the spine of a sleeping dragon. The river is lined by mangroves and its brown silt rich waters carry hardly any traffic but for a few fishing boats that bob up and down in our wake and are crewed by cheroot-smoking men and women in wide-brimmed conical hats, typical of the region.

The few villages we pass are little more than small hamlets of straw huts. People here eke out a simple and hard living throwing their nets into the muddy stream. Storks with incredible wingspans occasionally cross the water, looking more like pterodactyls than birds.

Water buffalo, often ridden by their guardians – young children who fend off the rain with fish-traps that double as umbrellas – stand about in shoulder-high mud. Nothing much has changed here since the colonizers packed up and moved south.

We stop at a large settlement, Ponnagyun, where most of the village’s inhabitants are stunned to see a white face. A couple of green hilltops nearby are crowned by pagodas. The market is mired in mud. Heaps of chili, garlic, and distinctly smelling bamboo shoots are the most common products. Cheroot-smoking women sit on low wooden benches cracking da nyin thee, a bean is also known as dog fruit, which, once steamed, accompanies almost every meal here.

“Na mae baed du lae?” – What is your name? – some of them shout. With Ponnagyun behind us, our Conradian journey continues for several more hours. As evening descends, the river narrows almost imperceptibly and begins to twist and writhe as the land rises from the flats. Tall grasses now line the shore and waterfowl and other birds rise into the balmy air, panicked by the noise of our engine. Quite suddenly, a low line of hills, topped by old chedis that rise from the vegetation like silent guardians, indicate that we have reached our destination.

Mrauk-U is worth almost any journey – an ancient city that once ruled the huge Arakan kingdom that stretched from Dhaka in the west to Moulmein (Mawlamyine) in the southeast. At its height in the 16th century, Arakan traded with China, the Middle East, Holland, Portugal, and Spain.

For a while, the Mrauk-U dynasty ran a war fleet of 10.000 ships that patrolled up and down the Bay of Bengal and was much feared by India.

The kings who ruled Mrauk-U were so wealthy that they hired mercenaries from Japan to serve as their personal guard. For more than three hundred years, Mrauk – U dominated the region, until it was absorbed into the Bamar Empire. And once the British had set up shop in Sittwe, Mrauk-U faded into obscurity from which it is unlikely to re-emerge.

At first glance, today’s Mrauk-U is little more than a sprawling if picturesque Rakhaing village of farmers and cowherds lining the river, little more than a ramshackle market in its center. Well not quite. The steep hills around the village are topped by the moss-covered chedis visible from the river.

The potholed streets are lined with monasteries 500 years old and rice paddies surround weather-worn pagodas, guarded by young cow-herds and their flocks. The local people, the descendants of this forgotten empire, live amongst some 700 temples and palaces.

A little below, the Dukkanthein is a forbidding black fortress-like temple. Inside, a humid spiraling corridor lined with images of the Buddha and the empire’s former elite turns almost three times in ever-tightening circles before reaching an inner chamber worthy of Egyptian pharaohs, dominated by a Buddha statue backed by flashing disco lights that does little to dispel the magic of the place.

Andaw Paya, though smaller, is equally impressive, its collection of moss-covered chedis has the ambiance of an alien landing site older than time. Not far away, Ratanabon Paya is a massive, squat chedi, surrounded by 24 smaller stupas. Cows graze amongst the monuments beyond which a verdant valley opens up where locals collect water from a covered well and more giant chedis, standing alone amongst rice paddy give a paradisiacal Shangri-La impression. Children herd their cattle around the monuments while their parents work in the fields around.

To the east of town, the Kothaung Pagoda is Mrauk-U’s largest structure, constructed by the son of King Minbin in 1553 and containing 10.000 more sacred images than his father’s pagoda, giving some indication just how wealthy and powerful the capital was in its heyday. This structure is also forbidding and fortress-like and more than a hundred small chedis rise from its walls and give the impression they were designed to repulse invaders from the air. The walls of its outer passage way are lined with countless bas reliefs.

Amongst all these crumbling archaeological edifices, active pagodas go about their daily business, young monks practice martial arts in the shade of wild mango trees and farmers move their cattle back and forth, reinforcing a picture of idyll and contemplation few historical sites of this magnitude can muster. For now, Mrauk –U remains lost in time and space, remote, rarely visited and utterly exquisite.

Hans Kemp first arrived in Asia in 1986 at the start of what turned out to be an 18-month sojourn before finally taking the Trans Siberian train from Beijing back to the Netherlands. The nomadic bug had firmly entrenched itself however and Hans soon found himself back in Asia guiding groups across the Karakoram Highway from Northern Pakistan into China’s Xinjiang province and onwards into Tibet.

Establishing a base in Hong Kong in the early 1990s allowed Hans to develop his photography skills, traversing and capturing Asia in iconic images published in a wide variety of international magazines and books. He pioneered the creation of quality postcards in Vietnam and stood at the cradle of Visionary World Publishers in Hong Kong.

Hans is the photographer of five books and a contributor to numerous others. His most successful book ‘Bikes of Burden’, depicting the motorbike culture in Vietnam, has sold over seventy thousand copies and, besides the original English edition, is published in a German, a Japanese and a French version. Gallery: hanskemp.photoshelter.com Blog: www.nohansland.com

Tom Vater has been writing about South and South East Asia for more than a decade and has published non-fiction and fiction books, travel guides, documentary screenplays, and numerous feature articles investigating cultural, social, environmental, and political trends and oddities in the region. He is co-owner of Crime Wave Press, Asia’s only crime fiction imprint.

His stories have appeared in publications such as The Asia Wall Street Journal, The Guardian, The Times, The Daily Telegraph, Marie Claire, and Penthouse.

He is the author of two crime novels and his highly acclaimed book Sacred Skin (co-authored with photographer Aroon Thaewchatturat), the first English language title on Thailand’s sacred tattoos, is a regional bestseller. Visit his site at www.tomvater.com

Buy Burmese Light: Impressions of the Golden Land on Amazon