Mongolia: Genghis Galloping Across the Steppes

On the Trail of Genghis Khan: Riding Mongolia

The relationship between man and horse on the Eurasian steppe gave rise to a succession of rich nomadic cultures. Among them were the Mongols of the thirteenth century – a small tribe, which, under the charismatic leadership of Genghis Khan, created the largest contiguous land empire in history.

Inspired by the extraordinary life nomads still lead today, Tim Cope embarked on a journey that hadn’t been successfully completed since those times: to travel on horseback across the entire length of the Eurasian steppe, from the Karakorum, the ancient capital of Mongolia, through Kazakhstan, Russia, Crimea, and Ukraine to the Danube River in Hungary.

From horse-riding novice to traveling three years and 10,000 kilometers on horseback, accompanied by his dog Tigon, Tim learned to fend off wolves and would-be horse-thieves, and grapple with the extremes of the steppe as he crossed sub-zero plateaux, the scorching deserts of Kazakhstan and the high-mountain passes of the Carpathians.

On the Trail of Genghis Khan is a story of a very long ride across Mongolia.

Along the way, he was taken in by people who taught him the traditional ways and told him their recent history: Stalin’s push for industrialization brought calamity to the stepp and forced collectivism that in Kazakhstan alone led to the loss of several million livestock and the starvation of more than a million nomads. Today Cope bears witness to how the traditional ways hang precariously in the balance in the post-Soviet world.

Only ten minutes earlier we had been bent forward over our saddles, braced against the nearly horizontal rain and hail, but now the afternoon sun had returned and the wind had gone. As I peeled back the hood of my jacket, details that had been swept away by the storm began to filter back. Nearby there was the rattle of a bridle as my horse shook away a fly; around us, sharp songs floating through the cleansed air from unseen birds.

The wet leather chaps around my sore legs began to warm up, and the taste of dried curd, known as aaruul, turned bitter in my mouth. Ahead, my girlfriend, Kathrin, sat remarkably calm on her wiry little chestnut gelding. Below, the rocking of my saddle as my horse’s hooves pressed into soft ground was steady as a heartbeat. 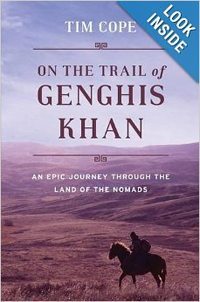 In a land as open and wide as Mongolia, I was already becoming aware that it took just the slightest adjustment to switch my attention from the near to the far. With a twist in the saddle, my gaze shifted to the curved column of rain that had been drenching us minutes before, but which now sailed over the land to our left.

Pushed out by the wind in an arc, like a giant spinnaker, it crossed the valley plain we were skirting and continued to distant uplands, fleetingly staining the earth and blotting out nomad encampments in its path.

During childhood, I had often watched clouds such as this, feeling envious of the freedom they had to roam unchecked. Here, though, the same boundless space of the sky was mirrored on the land. Scattered amid the faultless green carpet of early summer grasses, countless herds of horses, flocks of sheep and goats, shifted about like cloud shadows.

For the nomads who tended to them, nowhere, it seemed, was off-limits. Their white felt tents, known as gers, were perched atop knolls, by the quiet slither of a stream, and in the clefts of distant slopes. Riders could be seen driving herds forward, crossing open spaces, and milling by camps. Not a tree— or shrub, for that matter— fence, or road was in sight, and the highest peaks in the distance were all worn down and rounded, adding to the feeling of a world without boundaries.

Clutching the reins and refocusing my sights on the freshly cut mane of my riding horse, Bor, I wavered between this simple, uncluttered reality and the trials of a more complex world that were slipping behind.

Preparing for the Journey

For the past twelve months I had been preparing for this journey in a third-floor apartment with a static view over the suburbs of inner-city Melbourne, Australia. In theory, the idea of riding horses 6,000 miles across the Eurasian steppe from Mongolia to Hungary was simple— independent of the mechanized world, and without a need for roads, I would be free to wander, needing only grass and water to fuel my way forward.

One friend had even told me: “Get on your horse, point it to the west, and when people start speaking French, it means you have gone too far.”

In reality, there were complexities I needed to plan for. I knew, for example, that bureaucracy— getting visas and crossing borders with animals— would likely be a major obstacle, and taking the right equipment could mean the difference between lasting two hundred days on the road or just two.

Perhaps more significant were the challenges ahead that remained unknown, and of a type unfamiliar to me. At that point, early in my planning, not only was the scale of the journey beyond my comprehension, but the sum total of my experience as a horse man amounted to ten minutes on a horse almost two decades earlier, when I was seven years old.

On that occasion I had been bucked clear and shipped to the hospital with a broken arm. I was still deeply scared of these powerful creatures, and couldn’t quite picture myself as a horseman— a feeling shared by my mother, Anne, who was a little bewildered when I first mentioned the idea.
Notwithstanding the uncertainties, I had pressed ahead with plans,and by the spring of 2004 I felt reasonably well prepared.

With valuable direction from the founder of the Long Riders Guild, CuChullaine O’Reilly, I had studied the realities of traveling with horses and gathered together a trove of carefully selected equipment. I had also managed to make contact with people in embassies, visa agencies, and those who had promised to help me on the ground.

Not all preparations had proven fruitful. I hadn’t managed to raise enough money to reach my target budget of $10 a day (for a journey I expected to take eighteen months), and assurances I would receive long-stay visas were vague at best. Since planning had begun, it was also true that I had not accumulated as much experience on horse back as I had hoped.

In addition to that disastrous long-ago ride, I had managed to join a five-day pack horse trip through the Victorian Alps in southeastern Australia—courtesy of the Baird family, who were kind enough to take on the white-knuckled novice that I was—and a three-day crash course with horse trainers and an equine vet in Western Australia.

Nevertheless, I was buoyed by the firm belief that because the difficulties of the journey ahead would prove to be of a scope beyond my imagination, not even another forty years of planning would have been enough. And besides, who could possibly be better teachers than the nomads of the steppe who I would soon be among?

From the time I booked my air tickets and canceled the lease on my apartment, there had been no turning back. Life as I knew it was disassembled, and I went through the process of farewells with my family. After saying goodbye to one of my brothers, Jon, I slumped up against the wall in my emptied apartment in tears. Setting off on such a long journey as the eldest of four close- knit children, I felt as if I was severing ties, and it frightened me to think how much we might grow apart.

Tim Cope Finally, at Melbourne airport my existence was stripped down to an embrace with my mother. The longer I lingered in her arms, the more strongly I felt that, as a son, I was doing something that bordered on irresponsible.

After making my way to Beijing, and from there by train to Mongolia’s capital, Ulaanbaatar, I had spent a few weeks persuading Mongolia’s Foreign Ministry to grant me a visa extension (and very nearly failing), gathering together additional equipment, and, finally, searching for the horses that would be my transport, load carriers, and traveling companions.

A young English-speaking Mongolian man named Gansukh Baatarsuren had taken me to the home of a nomad family 180 miles southwest of the city, where he promised to find me “hero’s horses.” The process had proven tricky. There was a general belief among nomads— in my case warranted— that “white men could not ride,” and upon discovering the buyer was a foreigner, several previous offers to sell had been rescinded. No one wanted to be responsible for exposing a foreigner like me to danger, let alone risk maltreatment of their prized horses.

A Stroke of Luck

In the end I had been helped in my quest by a stroke of luck— there had been a general election, and voting was an opportunity for nomads to ride in from all corners of the steppe to socialize. Gansukh had gone to a polling place and put word out that he was looking for three good mounts. The following day, while I hid in a ger, he covertly negotiated with sellers on my behalf. In this way I had managed to buy two geldings and had purchased a third from the nomad family with whom we were staying.

Just six days ago I had assembled my little caravan and taken the first fragile steps, albeit most of them on foot, leading my little crew. Since then I had rendezvoused with Kathrin, who planned to ride with me for the first two months of the journey.

Lifting my eyes again to the steppe between my horse’s ears, I felt the stiffness in my joints ebb away. Perhaps it was just the effect of airag seeping in— alcoholic fermented mare’s milk that Kathrin and I had been served by the bowlful during lunch with nomads— but for the first time since I’d climbed into the saddle, a sense of ease washed over me.

With reins in hand, compass set, and backpack hugging me from behind, all I could think was that ahead lay 6,000 miles of this open land to the Danube, and across all of these empty horizons, not a soul knew I was coming.

On the Trail of Ghengis Khan. Buy this book on Amazon