On a mist-laden day outside Fort Portal in western Uganda, I hired a guide to take me hiking through the lower Rwenzori Mountains, more famously known as The Mountains of the Moon.

We hiked up and up through lush green fields, both cultivated and fallow, stopping occasionally while shepherds pushed their cows aside to make room for us on the path.

As the mist thickened into a drizzle, we stopped at one of the traditional thatched-roof mud huts that populate the hillsides. My guide, Rose, inquired of the children loitering nearby.

After a moment we stepped in. I hadn’t realized that we would be making a pit-stop at a witch doctor’s hut so that I could have my fortune told.

“Does he do this just for mzungu tourists passing through?” I asked Rose. She was tall and rail-thin, with strands of braided hair pulled back into a massive ponytail. One of Rose’s eyes was cloudy with a milky white film over it.

As if in compensation, her other eye was particularly piercing. “No no, many locals consult him,” she said. In fact, in the end, Rose herself consulted him. He was the real deal, I was assured. He not only handled divination but was also a traditional healer who could provide herbal as well as supernatural remedies for health problems.

We took a seat on a low bench inside the witch doctor’s home. His wife and a couple of kids came in to have a look at me and Rose. A naked toddler whose earlier runny nose had dried upon his upper lip stood shyly in the corner.

The other kids said to me the national slogan of Uganda, “How are you, mzungu?” They tried to coax the toddler into saying it also, but he simply stared at me, uncertain. Coax, coax. Finally, wordless, he trundled over to me, squeezed himself between my legs and wrapped his little arms around my waist, burying his head in the fold of my tummy.

The doctor had disappeared behind a curtain to gather his fortune-telling materials. We sat and waited at least 15 minutes while I lightly rubbed my temporary child’s soft, smooth back and chubby arms.

He stood still as a tree beneath my mzungu hands, his ear pressed against my belly button. The child scampered away as the doctor finally emerged. He spread on the floor a tattered leopard skin.

Around his chest he wore the skin of a black and white colobus monkey; his headdress was made of shells and another animal’s red pelt.

He sat down and leveled a shallow basin of water. He rang some cowbells, then began a long session of tapping five perfectly round sticks into the water, bundled inside his hand.

Alternately, he let them fall into the water to float into a pattern, and let them stand straight up after unwrapping his hand from around them to see how they stood, all the while mumbling under his breath.

Meanwhile, Rose asked me, “Do you have your questions ready?” “Questions?” “Yes, to ask the witch doctor so he can give you the answers.” No, I had not prepared any questions, as this whole deal was a surprise to me.

As he put the sticks into the water over and over, first standing up, then laying down, standing up, laying down, I tried to think of some. Finally, the witch doctor looked up at me and spoke his first words. He didn’t ask me for a question. He said, “Someone is disturbing you.” “What?” I was taken off-guard by this random statement.

“He says someone is disturbing you. Is it true?” Rose asked. The statement, in fact, was true on two different levels. I had been distracted the last couple of days by friendship on the rocks, and my intestines had been invaded a few days earlier by something god-awful that was still stabbing knives into my gut.

Despite the pain and other issues, I had managed two days of hiking. Friends following my travel blog had expressed dismay that I had even left my hotel room in this condition. I answered Rose, “Yes,” but said nothing more on the matter.

It was almost as if the doctor had used that statement as a litmus test to see if he had tapped into me correctly, like an acupuncturist testing his needle to make sure he has intersected the line of chi in a body. Now he asked for questions.

I told him my dad had died some years ago, and I wanted to know if I would ever be with him again. I figured, why not start with a big question … essentially I was asking if there was an afterlife. After consulting his sticks he said, “You see him in your dreams but you can never touch him. You can never get close to him. Is this right?”

Then eventually I could see him but we could not touch. “You’re in two different worlds,” the witch doctor said. “But you’ll be together again.” It was good to start out with a warm, fuzzy answer. “What other questions?”

Rose prodded. I couldn’t think of anything very original, but I rattled off a list of everyday concerns that consume the average Westerner. After answering several questions, the witch doctor left the room momentarily and returned with a cigarette.

A child came in a minute later to light it with a stick freshly plucked from a fire, its tip glowing red with a lazy trail of smoke.

After taking two puffs, the doctor set the cigarette down on the edge of a table and beckoned me to continue.

The child left to return the stick to the fire, his mud-caked bare feet silent as a cat upon the packed-mud floor. The prognosis for my life, in general, was the smelling of roses.

If the prophecies come to pass, life will be pretty damn awesome. I was starting to feel the guy was getting a little carried away, going a bit overboard with the peachiness. Eventually, I asked him about my career.

After intensive consultation with the sticks, he told me an evil spirit was blocking my success. It was somewhat interesting that this was the only area of my life which was a continual and haunting disappointment to me.

It was the only question he answered without roses. He asked me, “What are the witch doctors like in America?” I didn’t know how to address this question adequately and explain the scarcity of them, so I simply said I’d never met one. He felt sure, however, that only another witch doctor could have unleashed this evil spirit into my life.

Somebody somewhere had it in for me. “So what do I do?” my curiosity piqued. For 10,000 shillings ($4 USD) I could acquire some seeds that acted kind of like a voodoo doll.

I didn’t have a problem paying what is for me a small fee to support him and his rag-clad family. I had only a 20,000 shilling note with me and, though I knew it would be a fruitless question, I asked Rose if either she or he had changed.

As I handed it over, the witch doctor wheezed with laughter, and the children lurking in the doorway burst into giggles. The cigarette on the table had burned down to the filter.

The doctor managed two more drags, stubbed it out, and disappeared behind the curtain. I suddenly had a tinge of confidence when he returned and poured some feather-light seeds into my hand.

Maybe, in fact, blowing seeds into the wind and telling the evil spirit to fly away like the grasshopper will remove the mysterious obstacles in my life. It couldn’t possibly hurt to try. “It’s all you can do,” he said.

After I sat back down from blowing the spirit away, Rose asked her question and the doctor went to work on identifying the menace that was blocking her success in romantic love. (An evil ancestor spirit, it turned out; she had to drink a special tea.)

As I sat quietly, I realized that I had not felt any pain in my stomach for the last hour that I’d been inside the witch doctor’s hut. Quite a sudden recovery, I thought. As if someone had simply pulled out the knives. I went for the rest of the day and night pain-free.

As we left the mud hut and continued our hike, I felt the pit-stop had been a worthwhile cultural experience, and the relevancy of some of the things the witch doctor told me was at least mildly thought-provoking.

What I couldn’t shake, was a bizarre and utterly irrational pondering of the wordless child who had pressed his head against my stomach.

Perhaps because the physical pain was foremost on my mind upon arrival, though I never once mentioned it, not even to Rose, I was most impressed by its mysterious and abrupt disappearance.

Was the kid a silent messenger to the witch doctor, telling him I needed to be cured? Or perhaps the child himself was born a powerful witch doctor, his powers yet unknown.

True, I surely had to recover my health at some point, so it was a likely mere coincidence it happened right then, and good luck it happened so suddenly and completely.

After I got home and started looking through my photographs from that day, I came across the two I took of the witch doctor. He had told me it was alright to take photos if I sent him a copy (which I did, mailing to the tour guide), but I felt awkward and sheepish, and vaguely snapped only two on my digital camera without paying any attention to them.

The first one was out of focus. But I suffered a slight shock at the second one when I saw two black shadows coming out of me and Rose as if I’d captured evil spirits exiting our bodies.

“What the hell?” I said out loud to nobody. Perhaps Rose’s troublesome ancestor was departing? Was that my malevolent illness being cast off? Had my digital camera captured an evil spirit in a binary cage like a genie in a bottle?

There is a more scientific explanation available for this photo, but I have never in my life, having captured many thousands of images in photographs, encountered this effect.

I have found it more fulfilling to focus on how coincidental it is – that the single incident of this phenomenon happened inside a witch doctor’s hut, wherein I inexplicably cast off physical illness and at least symbolically cast off an evil presence that ostensibly had been plaguing me for years.

For once, I genuinely prefer to put my natural-born skepticism aside, to point to this photo and use the word “supernatural” without sarcasm or contempt. And maybe that, after all, is the most remarkable feat of the witch doctor who lives in the Mountains of the Moon. 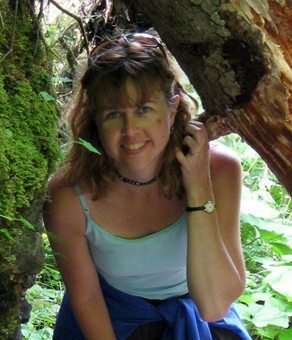 Shara Johnson writes literary nonfiction and plots her travels abroad from her home in the Colorado Rocky Mountains; you can follow her adventures on SKJtravel.net

View photos of wildlife in Uganda by Shara Johnson