Anyone who has traveled or lived in Salt Lake knows that this is a place that takes hiking pretty seriously. It’s the go-to activity around the year, and everyone thinks they know the best places to hike. To each his own, of course.

Mike Matson has hiked Salt Lake for many years. Below he has selected his personal favorite hikes, based on scenery, trail atmosphere, and other criteria.  His book, Take A Hike Salt Lake City has many more ideas for anyone who wants to enjoy the outdoors in Utah’s Capital City.

There was a time when glaciers filled the upper valleys in the Wasatch Range. Thousands of pounds of ice moved slowly down from the highest peaks, gouging out rock and sculpting the landscape into the dramatic forms Salt Lake City residents know and love today. Lake Blanche, along with Lake Lillian and Florence offer visual evidence of the sheer power of moving ice.

These lakes, sit at the base of a glacier-carved cirque, surrounded by rock scarred by the power of moving glaciers.
Looming above the water is the impressive Sundial Peak, a destination for rock climbers and mountaineers looking for challenging alpine routes.

The glaciers have done beautiful work, making the Lake Blanche Trail one of the most popular trails in the Big Cottonwood Canyon, and in the Wasatch Mountains in general.

At the top of Big Cottonwood Canyon, tucked into the steep rocky terrain and hidden from view from the road, sits a chain of sparkling alpine lakes. Like steps on a giant staircase, Dog, Mary, Martha, and Catherine Lakes offer hikers progressively more impressive rewards as they pad further up the trail.

This trail is particularly enjoyable in autumn, when aspens growing in scattered clumps between huge grey granite boulders stand out in bright pockets of orange and gold. While this is one of Big Cottonwood Canyon’s most popular hikes, the crowds thin as the elevation and miles mount, leaving serenity at Catherine Lake on all but the busiest summer weekends.

3. Red Pine Lake to the Pfeifferhorn

Hiking in the Wasatch Mountains doesn’t get much better than this! The trail to Red Pine Lake starts in Little Cottonwood Canyon and ascends gently into a massive granite boulder-strewn cirque.

The pristine snowmelt-fed lake is adorned with wildflowers and shaded by stands of subalpine fir. Granite talus fields spill into the lake from a long rock ridge extending down from Thunder Mountain, giving the whole scene, a wild, alpine feel.

Continuing beyond the lake, hikers can clamor to the top of the Pfeifferhorn, an exposed, windswept summit with unbeatable views of the range’s most dramatic landscapes.

4. Mt. Timpanogos via the Timpooneke Trail

Many people feel Mt. Timpanogos is the most visually appealing peak in the state. This, combined with the peak’s high altitude – it’s the second highest summit in the Wasatch Range – make it a must-do on many locals’ bucket list. Regardless of why hikers come to climb Timpanogos, the mountain rarely disappoints. The Timpooneke Trail gains 4,900 feet over six inspiring miles. Views from the top stretch to the horizon in all directions.

To the west is the Utah Valley, the green waters of Utah Lake, and the city of Provo. Looking north are all of the prominent peaks in the Central Wasatch, including Twin Peaks, and the Pfeifferhorn.

Looking for an alpine experience that’s truly above treeline? The exposed, windswept, rock ridge of Bald Mountain will not disappoint. The tiny, fluorescent green lichen that clings to red quartzite rock are about the only signs of life you’ll find on the upper slopes of Bald Mountain. During summer, the summit of Bald Mountain offers a pleasantly cool escape from the heat of Salt Lake City.

There’s almost always a breeze on the upper ridge, and temperatures promise to be 30 degrees cooler at 12,000 feet. The weather always seems to be different in the Uintas than it is in Salt Lake City, so plan accordingly. Thunderstorms often build in the afternoon, making Bald Mountain a better morning destination. Also remember to throw in a rain jacket and some warm clothes, even if it feels crazy when you leave the city.

Located in the shadow of Alta Ski Area’s chairlifts, Cecret Lake is a bite-sized treat of Albion Basin’s summertime splendor. This short walk samples the best of the alpine meadow beauty found at the top of Little Cottonwood Canyon. In mid-summer at their peak, the wildflower displays here are on par with some of the best in North America. Cecret Lake’s family-friendly trail is a great first hike for toddlers and small children.

Interpretive signs provide information about the surrounding environment, including the wildflowers, insects, and other wildlife found there. The gently sloped, wide-open path has room for kids to play, is easy to follow, and provides an alpine lake as a reward at its end.

Lone Peak is one of the Wasatch Range’s most aesthetic mountains. Steep granite walls, a stunningly beautiful alpine cirque, and its prominent position along the Salt Lake Valley southern skyline set Lone Peak apart as a Wasatch highlight. In 1977 the Lone Peak Wilderness, protecting 30,088 acres, was created as part of the Endangered American Wilderness Act. This wilderness designation and it’s high, difficult to reach upper slopes, keep the mountain’s character as wild as any spot in the Wasatch Range.

A resident heard of mountain goats is often seen in Lone Peak Cirque or along it’s craggy ridges. The granite-like quartz monzonite, rock found on the walls of Lone Peak Cirque is sought-out by rock climbers for it’s long, appealing lines.

Some of the best high-altitude, alpine rock routes in the state are found here. Visible from the Salt Lake Valley, Lone Peak is a beacon of alpine beauty that only truly reveals itself to hikers who make the effort to see it up close.

Malans Peak Trail is a shaded forest hike to a stunningly beautiful lookout point, allowing sweeping views of the Northern Wasatch Front. Shaded by a lush forest for most of the route, Malans Peak Trail is an excellent choice for hot, summer days. While Malan’s Peak is actually a sub-ridge of the much higher Mt. Ogden, its commanding position above the city makes it a natural destination for hikers.

The view is one of the best along the Wasatch Front, spreading out from the town of Ogden to include the Great Salt Lake to the west, Antelope Island and the Stansbury Mountains to the southwest, and the prominent peaks of the Northern Wasatch Range, including Ben Lomond and Willard Peak to the north.

Frary Peak Trail is a desert hike to the highest mountain summit on Antelope Island, the largest island in the Great Salt Lake. This challenging hike leads hikers to some of Antelope Island’s most appealing features: wild bighorn sheep, free-ranging American Bison, and dramatic views from the highest point on the island.

The 15-mile long Antelope Island is the largest island in the Great Salt Lake and is perhaps Northern Utah’s most unique wildlife sanctuary. The island is home to a herd of approximately 600 American bison.

The grassland habitat covering the island also supports a herd of bighorn sheep and the pronghorn antelope. Antelope Island is an important stop-over for millions of migrating birds, who pause to feast on tiny brine shrimp living in the Great Salt Lake.

Ben Lomond is one of the crowning jewels of the Northern Wasatch and one of most recognized peaks along the Wasatch Front. It’s claim to fame: according to local legend, the peak was the inspiration for the mountain in the Paramount Pictures logo.

Paramount’s founder William Hodkinson grew up in Ogden and sketched the peak from his memory on a napkin during an early business meeting. The mountain’s steep western face and prominent position above Ogden, make it both easy to recognize, and a coveted summit for peak baggers.

The mountain is one of the best places to find wildlife in the Northern Wasatch. A herd of mountain goats range back and forth between Ben Lomond and the Willard Peak to the north. 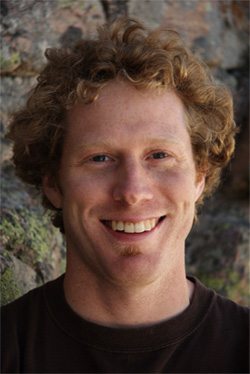 Adventure is the guiding force in the life of outdoors writer and photographer Mike Matson. Whether he’s sweating his way up a sandstone tower or skiing in the mountains, you can expect to find Mike in Utah’s outdoor playground year-round. Mike finds Utah’s natural diversity astounding—from the snowcapped Wasatch Mountains above Salt Lake City to the twisted, barren rock landscape of the Colorado Plateau, the state offers a lifetime of adventure. Mike’s favorite ways to enjoy Utah include camping, hiking, backpacking, rock climbing, mountain biking, river running, canyoneering, skiing, and snowboarding.

Mike’s views and recommendations are formed from decades of experience working as a backcountry forest ranger, a whitewater river guide, and a professional writer/photographer. His writing and photography have been published in magazines, catalogs, calendars, and online. His work has appeared in Backpacker, Canoe and Kayak, National Geographic, Northwest Travel, and Washington Trails magazines. To see more of Mike’s work, visit his blog at matsonadventuremedia.blogspot.com. Mike lives in Salt Lake City with his wife Sonja and son Harvey.