Roskilde, Northside and Other Music Festivals in Denmark

Sharing a kiss at the Roskilde Music Festival in Denmark. Connie Westergaard photos. 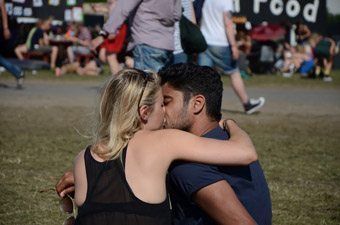 Denmark: A Country of Music All Summer Long

There are many reasons why you should visit Denmark. One of them is the vast amount of music festivals during the summer months of June, July and August.Here you will find the happiest people in the world – which in fact the Danes are – sleeping in tents, drinking beer and having a good time. Here is a guide to the author’s-a native Dane- three favorite music festivals.

If you ever wondered what the Danish concept of hygge – loosely translated as coziness– is you will surely find the answerat a Danish festival. Danes love festivals, and thus you will find a smorgasbord of choices throughout the country. Know that when Danes choose a festival, music is not the determining factor.

Being with your friends and having fun is what matters. The music comes second. You will find that people tend to spend more time hanging out in their camps and socializing than listening to music. Sometimes they are simply having too good a time to make their way to the concerts.

Roskilde Festival is the mother (some would probably say the rebellious teenager) of all festivals and sort of an institution. It is the largest North European culture and music festival and has existed since 1971. It is said that you are not a rock star until you have played the legendary Orange Stage at Roskilde. It is hard to explain what Roskilde it, because it is so much more than music.
The Northside Festival is very famous in Europe. 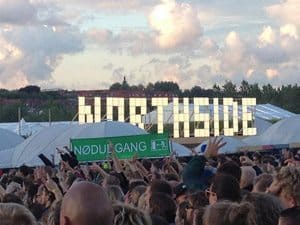 It is art, architecture, food–a new wave of quality Nordic food has found a foothold at the festival as an alternative to the traditional festival junk food -, charity – the profits from the festival are donated directly to humanitarian and cultural purposes -, shopping–you will find a long list of Danish designers, like for an example Henrik Vibskov, selling their clothes -, events– the naked run, camp parties, camp of the year etc. are all taking place simultaneously to the concerts.

And then of course there is the music: Punk rock, alternative rock, pop rock, country, electronic, hard rock, heavy rock etc. The festival has made it its primary mission to present new and upcoming artists, so at Roskilde you will find a few mainstream rock stars like U2, Bruce Springsteen, R.E.M., Coldplay etc., but mostly you will find artists whom you have never heard of, but whom might change your musical life.

Most of all Roskilde Festival is a feeling – a feeling that 80,000 festival-goers refer to as the Orange feeling.Eighty thousand people leave their ordinary lives behind and go crazy at a week long party. Mind you Roskilde can be a handful, and you shouldn’t mind getting a little dirty.

Where: Roskilde, 21 miles west of Copenhagen, East Denmark.
When: The final Saturday in the Roskilde period is always the first Saturday in the month of July. In 2013 it is from 29 June – 7 July.
Who: The average age of the audience is 23 years old.
Music: Rock, country and electronic
Read more:www.roskilde-festival.dk/uk

Skanderborg Festival has existed since 1980 and is the second largest festival in Denmark. It is also the most beautiful one and is just as often referred to as Smukfest, which means beautiful partyin Danish. Beauty is the core of the festival from listening to concerts underneath the treetops to camping out by the lakes, you get the feeling you are on a five-day picnic in Wonderland.

And there is hardly ever any sign of trouble despite 50,000 people- most of them intoxicated – are gathered in the same place. People are truly happy here. And Danes generally have a reputation of being quite good-looking, so you will be sure to find some beautiful people too.
The famous orange Roskilde stage is a place nearly every top rock group has performed. 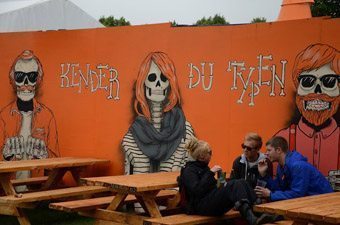 The festival appeals to an older and more mature crowd than Roskilde Festival. Most Smukfest-goers are in their thirties and might be a little pickier when it comes to living in a tent for five days than people who go to Roskilde Festival. Thus you will find nicer and cleaner camping facilities than at Roskilde, real toilets and hot showers. Some people even bring their kids, although I wouldn’t recommend camping with kids at the festival.

When it comes to the music Smukfest gives people what they want. That means that you will almost only find mainstream and established artists in the music program. If you are not a Dane, a lot of the performing artists will be unknown to you, as there are a lot of Danish musicians performing here, but always with some good old internationally known headliners to get the party started.

The bands are often bands that peaked during the 1980s or 1990s when the festival audience were young. Thus Bryan Adams, Blur, Robyn, Roxette, Suedeand Kylie Minogue have all played in the beech forest.

Where: Skanderborg, 18 miles south of Aarhus, West Denmark
When: Always the second weekend in August. In 2013 it is from 7 – 11 August.
Bruce Springsteen and Steve Van Zandt playing at Roskilde. 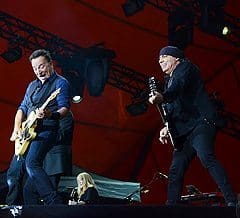 Who: The average age of the audience is 34 years old.
Music: Pop
Read more:www.smukfest.dk

Northside Festival is a little different. First of all it is a very young festival and only three days long. It was held for the first

time in 2010, but has rocketed in a matter of no time because of its ability to book some very popular international artists and bands like White Lies, The Streets, Editors, Suede and Snow Patrol as well as some of the most popular Danish acts.

Second of all it is not possible to camp at Northside Festival. Thus most festival-goers stay at hotels, B&B or private accommodation in Aarhus, which is the second largest city in Denmark and worth a visit, festival or no festival.

Innovation, sustainability and user involvement are the keywords at this festival. Just like the other festivals you will experience a very socially responsible festival that recycles its trash, offers organic food etc.

Obviously the music plays an important role at this festival, since there are no camp activities. That does not mean that the audience is not having a good time though. They bring blankets and lay around on the field drinking and eating together with their friends.

What I really like about this festival that you do not get at any of the others, is that there are only two stages, and there is only ever one artist or band playing at any one time. Thus you never miss a concert or are forced to choose between two of your favorite artists or bands because they are playing at the same time at two different stages. That will never happen at Northside. And then there are the toilet facilities simply the cleanest festival toilets ever. It might sound like a minor detail but trust me a dirty festival toilet is no fun.

Where: Aarhus, West Denmark
When: Second weekend of June.In 2013 it is from 14- 16 June.
Who: The average age of the audience is 28 years old.
Music: Rock
Read more:www.northside.dk
Relaxing on a warm Scandinavian afternoon at Roskilde. 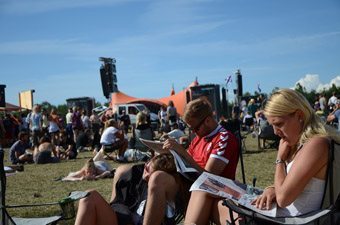 This article was last updated Jan 13, 2019 @ 3:24 pm
If we've inspired you to travel with this story, why not check out the prices to get there and make it happen. Search airfares, hotels, and rental cars here. Thanks!