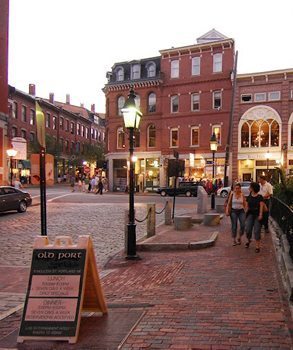 I thought I had left Florida behind when I lately traveled to Portland in southeast Maine, a city of 67,000 and metro hub of almost four times that many. Reading had prepared me well. Portland is gifted in outlook, compact and cultured, self-defining, youthful, protective of its working waterfront. Its civic outlook unexpectedly helped advance work that I had left at home.

Portlanders and I share what my late logic professor called “a high level of presupposition.” Forget handshakes. Instead hugs from the start. My aspirations for Florida already reign in Maine.

I’m at work on a book about tourism-free travel. The chapters are about different ways of experiencing where we find ourselves. For example, instead of Florida à la Disney, touring the state with Green Guides or with Bike Florida. Instead of experiencing Caribbean cruise ports led by cruise directors to shops whose proprietors kick back, researching environmental and social equity groups that can guide us more authentically.

I’m also at work on a conference about how Florida, coming out of recession, might redefine the state for its 19 million residents who mostly arrive from elsewhere dreaming about never-ending vacations. Portlanders I met immerse in nature and culture. They’re an un-yoked herd.

Portland’s readily apparent self respect rewards its drive for investors, workers and visitors who precisely respond to places defined by resource protection, and not by turning resources into attractions.

And it’s not just lobsters but lobster culture that animates the Port District. It’s docks and sheds, ship chandlers, seafood markets and an auction house where buyers bid by 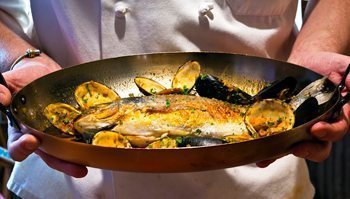 Culinary creation of fish at Street and Co., Portland, Maine.

laptop and phone. It’s an almost round-the-clock district where dawn joggers and cyclists along waterfront Commercial Street power up the sun. Aromas of coffee and bagels rise. Mornings at Port Bean with coffee, a regular gets his home-baked sourdough sliced, toasted and served to his klatch at a bay window table.

Throughout the day, lobstermen walk from their boats to familiar harbor restaurants: Becky’s across from Hobson’s Wharf known for its “chowdah”, Porthole for its all-you-can-eat fish fries.

Evenings at plank tables in patios slivered between buildings, Maine suds on tap whet appetites for platters of lobster, bowls of mesclun greens and helpings of crusty bread and goat cheese. Munjoy Hill up from the waterfront and cosmopolitan West End bookend Port District history.

Commercial Street continues north to the docks of Casco Bay Lines, which operates ferries to the bay islands. On the lee side rise new office buildings and hotels, semi-conforming to architectural tradition even if without the ornamentation of the old quarter. Differently there, red brick Industrial Age facades brace the narrow streets.

The look formed after the Portland fire of 1866, five years ahead of Louis Sullivan’s re-do of Chicago following that city’s flameout. Its legacy attracts shopkeepers whose sequence of reward satisfies their personal aesthetic ahead of their bank accounts. Storefronts add authenticity that layers in visitor trust in this place of almost all non-franchised shops. The scene bubbles up in the dreams of New Urbanists everywhere. Visitor purses click open like honor salutes to a city aware that nothing benefits it more than affirming its singular character. 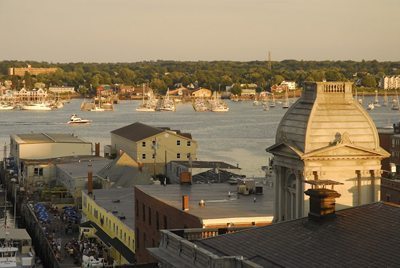 Union Station for a Strip Mall

Portlanders awoke to this following the 1963 destruction of historic Union Station for a strip mall. Greater Portland Landmarks formed a year later. Hilary Bassett, its executive director, says of Portland “that in a place like this you know where you are by the architecture. It’s so rich.”

Hilary walked me around Munjoy Hill, where shipping barons built mansions, some painted in rose-mauve, some yellow, others of red brick. They installed sun porches behind glass windows above impressive entry stairs.

They looked over the Eastern Promenade that by the late 19th century was already a great public space above the harbor, rimmed by a narrow-gauge railroad and later a bike path. Kids sleigh the hill in winter. Summers, families bring blankets for concerts played in the gazebo.

Highest atop the hill is the Portland Observatory, now a museum. Its financing in 1807 at a site overlooking a cow pasture was by shipowner subscription during the golden age of sail. Telescopic sightings alerted companies to arriving ships. You look far across the harbor to Civil War Fort George, to Point Ledge 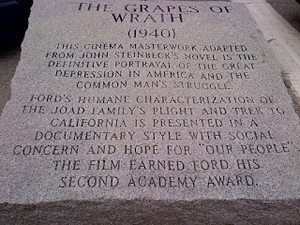 Homage to the great movie director, John Ford, in Portland.

Lighthouse that’s privately owned, solar powered, still operated by the Coast Guard, and to little Bug Light formed like a Greek Temple with applied columns. The observatory’s last owner before its acquisition by the City of Portland was the Maine Central Railroad whose last train arrived in 1961. The railroad’s sale of Union Station doomed that landmark but ironically saved the observatory.

Fast Forward: This month service was extended on the passenger rail service that extends from Boston, to Portland, all the way up the coast to Brunswick. Locals couldn’t be prouder.

West End, on the other hand, casually combines housing and storefronts that drop back from Congress Street, the city’s main east-west corridor, where except along Western Promenade they shun pretense for a stylish mix. 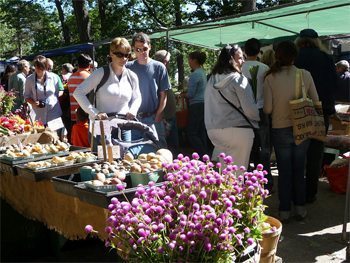 One street corner contains a series of granite slabs inscribed with the achievements of movie director John Ford, whose Irish parents migrated to America in 1872 and soon settled in Portland. Nearby is the Percy Inn, an 1830 urban brick rowhouse with a look described by one reviewer “as though Charles Dickens has just stepped out for a moment, leaving his books, fireplace and exceptionally large cat behind.” I liked the nailed stubble of arts fliers long torn away.

Homage is affectionate. Christmas at Longfellow Square, locals pop a hat on the poet’s head and tie a scarf ‘round his neck. 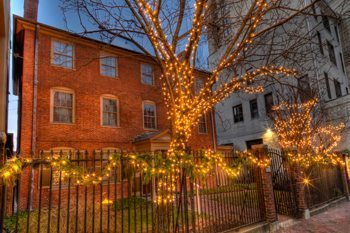 Bistro bars fill early and tables stay full for dinner. At LFK [Longfellow Fellowship of Knights], lately an antiquarian bookstore, bookshelves and a section of comfy cushioned seats invite readings of classics and of Bradbury, Mailer, Stephen King, and Theroux. The scale remains much as it was with its 18-foot-high ceilings – altogether a look emphatically English, old but not olde. The place resounded with fellowship on an evening when my friend Tony and I dropped in. Up front, they rotate 35 taps of mainly Maine brew.

Tony and I walked on for dinner at Caiola’s, maybe 25 seats with a couple banquettes, sepia photos of Italy, ceiling fans and Art Nouveau lamps, embraced by a low audible buzz. 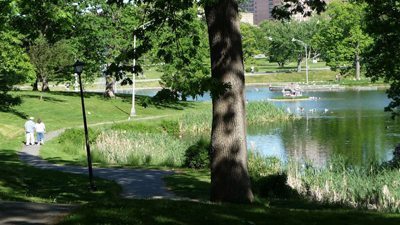 40 of Your Best Friends

Outside Local Sprouts Cooperative, a hay ball sat atop a curbside car, surely an installation. Inside – like a socked-in winter cottage with 40 of your best friends — I met Laura Burden, Jennifer Hutchins and Elizabeth Trice.

They work for four agencies that collaboratively kindle Portland’s glow: Laura for 2º Portland, Jen for Creative Portland, and Elizabeth for Portland’s Workspace Community, and on special projects for surrounding Cumberland County.

Laura explains that “2º Portland is about economy and community together. It’s meant to balance out Vacationland that, though it’s the largest industry, is only good four months out of the year. Maine is the oldest state by age, it’s the whitest, and it’s just gonna get older and whiter unless we change this.”

Accordingly, says Jen, “Portland’s creative people invite others like themselves, people in arts, culture and otherwise highly skilled, to check out the city. Visitors and the people they meet form the 2º connection” — that level of intimate pre-supposition. A land’s end effect stirs imaginations in this last sizeable city of a 35-million conurbation up the north Atlantic coast. Everyone agrees that it’s less stressful in this domain of the far north than Boston. 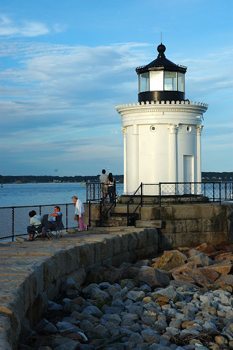 I thought about Florida that mostly attracts people already retired, drawn to subdivisions behind walls where they golf and otherwise enrich the state’s medical practitioners.

“Different from the economic development corporation that we’re part of,” Laura says, “we work to attract people, not business. Collaboration leads to business.”

“We also use the 2º name because it’s during the second month of the year when it’s coldest and we interact for survival,” says Elizabeth. “Winter is when we most enjoy invitations to a year-round series of 14-course monthly dinners served with seven wines — moveable feasts of entirely Maine foods, including some foraged.”

In the glow, I felt myself almost ready to give up Florida summers for Maine winters.

Floridian Herb Hiller writes critically about mainstream tourism and about one of a kind places. Two of his three books have won top awards of the Society of American Travel Writers Foundation and of the North American Travel Journalists Association.