Although Antigua and Barbuda, a former British colony, is now an independent nation, it still retains many English traditions. The capital, St. John’s, is dotted with colorful weathered plantation-style houses with corrugated iron roofs and louvered verandas.

Beaches, resorts and dramatic scenery attract visitors just north of the capital, while the historic harbors of the southern coast bear vestiges of the country’s glory days as a strategic naval port.

During my short time on this Leeward Island, I managed to pack in some serious fun. I snorkeled amongst the many colorful fish and some of the most pristine reefs in all of the West Indies. I had fun sailing on a little Hobie Cat and I zip-lined through the rain forest.

I explored Devil’s Bridge, and I visited Betty’s Hope, a former sugar plantation with stone windmill towers that seemed to reach the clouds.

I don’t know if it was good luck or if it was divine intervention, but it just happened to be ‘sailing week’ in Antigua.

Drawn to the Docks

Naturally, the sailor girl in me was drawn to the docks where I danced the night away drinking local rum with some sailors in English Harbor. It was here that I even managed to fall in love with a donkey!

As I prepared for my very first trip to Antigua, the emphasis was on taking up residence at an all-inclusive resort that was conveniently located for a full exploration of the island. I found just the spot in the Grand Pineapple Beach Resort midway on the north shore of this island that claims 365 turquoise water and sugar-white sandy beaches.

Although my five-day jaunt wasn’t long enough to count them all, the ones I was lucky enough to see were glorious and as advertised. The very first thing that hits you when you arrive at the Grand Pineapple is the brilliant, white curve of beach that sweeps along 1,600 feet of stunning waterfront.

Lapped by water so clear and gemlike that it glistens like liquid sapphire, this resort totally embodies the ultimate Caribbean experience. And, it’s the best-kept secret because you won’t find a better bargain. And, as they cater to honeymooners and families, I traveled family-style for this trip. We were not disappointed!

Antigua (pronounced An-tee’ga) and its sister island, Barbuda, is located in the middle of the Leeward Islands in the Eastern Caribbean, roughly 17 degrees north of the equator. To the south are the islands of Montserrat and Guadeloupe, and to the north and west are Nevis, St. Kitts, St. Barts, and St. Martin.

Antigua, the largest of the English-speaking Leeward Islands, is about 14 miles long and 11 miles wide, encompassing 108 square miles. As far as getting around goes, you’ll need to rent a car or take a taxi. English is widely spoken and the US dollar is accepted, although EC (Eastern Caribbean) is the main money exchange.

This makes it a comfortable place to go for both British and American travelers. New York airports now offer reasonably priced non-stop, four-hour flights to Antigua, so it makes it’s a no brainer if you’re looking for a quick getaway to escape the winter doldrums or the hectic lifestyle of everyday living.

Indian Town National Park and Devil’s Bridge Indian Town Point is located on the eastern extremity of the island. It’s thought to have been an Arawak campsite prior to the arrival of the European colonists.

Island rumor has it that many slaves took their own lives by jumping off Devil’s Bridge and into the watery grave below to escape the tortures of bondage.

This large, naturally carved limestone arch on the shoreline overlooks the Atlantic Ocean and it offers one of the most spectacular sights on the island. At high tide, the rougher waves force enormous geysers of water through boreholes in the slippery rocks near the bridge.

These ‘blowholes’ can catch you off guard as the water explodes through them. Guided tours of the site are available, but you can tell any taxi driver to take you there and explore the area on your own. Birders love the park for its 36 different species. Whether you pack a picnic lunch and spend the afternoon or just a short time relaxing next to the crashing surf, its stunning natural beauty will almost certainly awe you.

In 1674, Sir Christopher Codrington came to Antigua from Barbados, built a sugar plantation, and named it after his daughter, Betty. Betty’s Hope was the first large sugar plantation on Antigua and its success led to the island’s rapid development of large-scale sugar production.

Although the only surviving structures are two stone sugar mills and what remains of the still-house, the site’s importance in Antigen history has prompted the government to begin developing it as an open-air museum.

If you drive around the island, you will notice about a hundred or so stone windmill towers that are a part of the Antiguan landscape, but the two restored examples at Betty’s Hope provide a dramatic sense of the way these mills must have dominated the island during the years that sugar production was the dominant industry.

I recommend visiting Betty’s Hope after Devil’s Bridge as the two sites are only a short distance away from each other and each can be seen in a short amount of time.

Zip-Line Through The Rain Forest

Antigua’s most picturesque drive meanders from the low central plain of the island up into the ancient volcanic hills of the Parish of Saint Mary on the island’s southwest quarter.

The bumpy roads pass through areas of lush vegetation and rainforest and rise to the steep farmlands around Fig Tree Hill (figs are what Antiguans call bananas) before descending to the coastline again.

Along the way are banana, mango, and coconut groves, as well as a number of old sugar mills and pleasant little churches. It’s not uncommon to see a few cows tied to a stake on the side of the road.

During my visit, I checked out Antigua’s Rainforest Canopy Zip-Line Tour. It’s a fantastic adventure nestled in this hidden tropical zone.

My two-hour tour was exciting and I felt very safely attached to the state of the art double latched zip line. I zipped from tree house to tree house with my thirteen-year-old daughter and, although the treehouses seemed a bit rickety at times, we were all smiles.

My favorite area was the fifteen square miles of Nelson’s Dockyard National Park in Antigua’s graceful and evocative historic district. Developed as a base for the British Navy back in the great age of sail, the harbor served as the headquarters for the fleet of the Leeward Islands during the turbulent years of the late 18th century.

Although the dockyard was greatly expanded at that time by Horatio Nelson, it was gradually abandoned in the nineteenth century and was closed in 1889.

Today Nelson’s Dockyard has been completely restored and is now the only Georgian Style dockyard in the world. Aside from all that history, the English Harbor area is by far the most fun spot to go on the island for nightlife, sailing week, or not. I danced the night away at the Mad Mongoose and check out Abracadabra for some homemade limoncello.

I never made it to the Yacht Club, but I hear that’s a fun spot, too. Don’t go too early, as most of the fun starts after 10 pm.

In Love with an Ass

Undoubtedly, every place I travel I seem to fall in love with the animals. In Thailand, it was the elephants and in Spain, the bulls. So, it was no shock that in Antigua I fell in love with the donkeys. One, in particular, found a special place in my heart.

I don’t know the donkey’s name but Jacko is his owner, I’ll always remember his soft fur, big brown eyes, and gentle way.

The animal is owned by a local rastaman who hangs out nightly in English Harbor and, for the cost of a beer, you can pose and snap a picture with the donkey. Normally, I stay away from situations such as this, but my heart was drawn to this little guy.

Donkeys have become a bit of a problem in Antigua. In the 1960s, the economic focus in Antigua began shifting from agriculture to tourism and the donkeys’ usefulness began to decline. Many were turned out to fend for themselves and, of course, have reproduced at will.

This has resulted in a very large population of stray and roaming animals. While most of us appreciate the donkeys and their past importance to the nation, the fact remains that when allowed to wander at will, they invade farming plots and resident gardens and eat down the vegetation. They also present a risk on the roads, especially at night, and they need to be controlled.

Antigua’s Humane Society has recognized the problem at hand and have set up a donkey sanctuary located near Bethesda. The Donkey Sanctuary welcomes visitors to see their 150 donkeys and is a favorite stop for children and adults alike. It offers families a wonderful alternative to another day on the beach.

Sadly, I learned about this place on my last day of vacation, a Sunday, and, like most places on Antigua on Sunday, it was closed. So, be sure to visit Monday through Saturday from 10-4 so you don’t get locked out.

Antigua’s retention of much of its British heritage seems to be a comfortable fit for many visitors, especially the British. The equatorial winds make it a world-class sailing venue and one has the choice of beautiful beaches; open or secluded. It’s not overly commercialized and Antiguan’s believe it is the center of the Universe. It remains a true treasure of the Caribbean.

From the beach, walk up the hill and dine at the funky and famous Outhouse, operated by 85-year-old Miss Mary.

This eccentric eatery is perched atop a cliff with a stunning panoramic view of the ocean. When you go, have the BBQ and a Wadadli beer and, bring a ‘sharpie’ marker, to leave your mark!

A terrific home base, friendly neighbors, and beautiful beaches. Antigua. What’s not to like?

To learn more about the funky, eclectic Out House Restaurant at the Grand Pineapple…

I flew American Airlines non-stop from JFK International Airport to the beautiful Island of Antigua, a short 4 hour flight and viola, rum punch in hand, I was in paradise! To book your flight to Antigua today contact American Airlines.

For more information on Antigua and Barbuda :Check this web site out for great ideas and everything Antigua

For more info on The Donkey Sanctuary 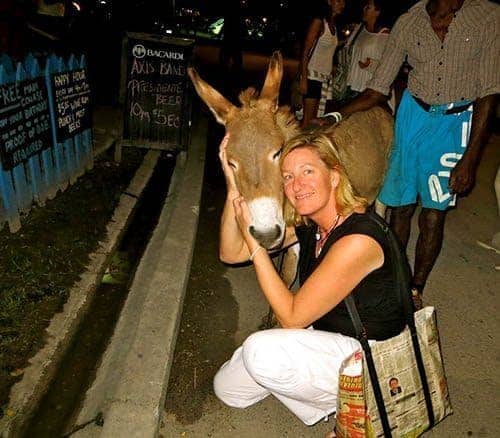 Check out the Mad Mongoose

Jean Miller Spoljaric has a great time when she travels, and it really shows in her stories and her eye-popping photos. She brings her unique brand of enthusiasm to the art of travel writing. She lives in New York’s Dutchess County.