Riding By The Seat Of Your Pants In Hernando County, Florida

“In my opinion, this is bigger than Disney,” said Kenny Joel, opening his arms to the surrounding forest with a wide smile.

“It’s more fun, far more unique, and the entire family can come out here and share something that’s exhilarating for both the kids and the adults.”

We were marooned deep within Florida’s 2,600-acre Croom State Park and had just completed an exhilarating trail ride that wound along narrow dusty paths and bounced over deeply worn ruts.

My face was black where dust had seeped in around my goggles and helmet, and I could still feel the heat from the now-still engine pressing against my thighs.

With three intimidating black snorkels protruding from the engine, my Renegade ATV more closely resembled a 21st-century amphibious war machine than a recreational vehicle. This neon beast turned on a dime, braked fast, and accelerated even faster.

Kenny had grown up racing dirt bikes in Hawaii, and now I understood his need for speed. Even as I smiled at Kevin’s animated spiel, I felt the nagging urge to careen through the trees yet again.

With over 80 top-of-the-line ATVs and dirt bikes to choose from, more than 2,000 acres of groomed trails and untamed terrain, and virtually no riding rules, the Croom ATV Park is an invigorating alternative to the draining monotony of Disney’s Magic Kingdom.

Located an easy 30-minute drive from Tampa, Croom ATV Park is one of the few state parks in the country that has allowed the integration of outside business. In Brooksville, Croom ATV has commandeered 2,600 acres of state land, now officially designated for use by Croom riders.

With Croom, everybody from parents, grandparents, and even small children are encouraged to ride. In order to accommodate beginners, the park is equipped with circular sand tracks, perfect for learning the ropes of shifting and balance. Kenny tells me that his youngest rider yet was an 8-year old boy, who apparently turned out to be a natural.

Much like everything else at Croom ATV, Kenny’s insurance policy is pretty straightforward. “We don’t put an age limit on the people who want to ride,” Kenny tells me. “I paid personally for every machine here, so everybody who rides also pays for insurance. If you hit a tree and ruin the machine, that’s on you. We’ll take people who want to learn aside and teach them how to ride safely before they hit the trails.”

In Croom, every square foot of mud, sand, and pine needles is a fair riding game. Sure, there are plenty of groomed trails to follow, including a 50-acre sand-bowl complete with steep dunes and rolling jumps, but riders are encouraged to make their own trails as well.

For those who find the vast acreage and thrumming engines a bit intimidating, Croom offers guided tours through the park. Your guide will lead you along beginner, intermediate, or advanced trails depending on your ambition and experience.

As any top-notch attraction should, Croom ATV offers its guests appropriate accommodations. Although there is a nearby Hampton Inn, the real attraction is in riding and camping at the Croom RV Park.

This designated RV campground offers the perfect alternative to humdrum neighboring hotels. And for those riding for several days, camping within the park will allow you to retain your ATV through the night.

Riders who rent for a full day and wish to camp within the park will be subject to a special full-day rental rate, which includes the freedom to ride until sundown rather than 5 p.m. In the spirit of true Hawaiian hospitality, Kenny offers complimentary RV camping for his customers in the event that the RV Park has reached capacity.

Around the country, a new generation of extreme-sport enthusiasts is rising. Thousands of young adults are voicing their interest in radical new sports such as kiteboarding, paddleboarding, and ATVing.

In Florida, Croom State Park is amongst the first to recognize this paradigm shift and move to take advantage. Now, where State Parks had once struggled to attract patrons, many now have an opportunity to thrive.

The integration of Croom ATV into Croom State Part has ignited a spark that now serves to benefit all. Despite apparent abuse of the forested terrain by ATV riders, Croom ATV is actually serving to preserve the state park, which may have otherwise become obsolete, a result of decreasing visitation.

Croom ATV also serves to promote revenue for the park itself, which charges visitors $2 upon entry. It may not sound like much, but these $2 portions provide the state with an incentive to maintain the Croom area. Above all else, the integration of Croom ATV has boosted the popularity of Croom State Park and helped to attract tourist attention and dollars to the greater Hernando County area.

Croom ATV carries top-of-the-line ATVs and dirt bikes, and their prices are reflective of that quality.

Although Kenny admits that a weeklong family vacation spent within the Croom ATV Park would be financially comparable to a week at Disney World, he maintains that Croom offers an experience that is quite simply more fun for everybody.

While In Hernando County…

Visit the world’s only City Of Live Mermaids and enjoy the classic Weeki Wachi mermaid shows.

Prepare to be glued to the glass in this underwater theater as mermaids dive, dance, and sing in the depths of the Weeki Wachi Spring before your very eyes.

The spectacle is riveting enough, but add in a 1950’s storyline and fascinating history, and the Weeki Wachi Mermaids quickly become a must-see attraction.

Take another day in Weeki Wachi to kayak the Weeki Wachi River. This spring-fed river is completely translucent, and peering into the depths is akin to staring through a glass window. Kayaks and tours run from the state-park building near the Riverhead. Bring a snorkel and prepare to try any of the safer looking rope swings.

Dine at Papa Joe’s, where authentic Italian cuisine has made a name on the Gulf Coast. Try the softball-size meatballs or any of the many steaks.

Stock up on western apparel at Remington Outpost, only a stone throw from Papa Joe’s. Cowboy hat purchases come with an instructive ‘southern-slang’ seminar held the following day. 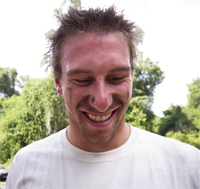 Peter Sacco, a former GoNOMAD intern, went to the University of Massachusetts where he was a varsity swimmer when he’s not out on assignment.  He now lives in South America.