What Is Dragobete?  Romania’s Valentines Day

It was barely 5:00 in the morning and I was having a hard time keeping my eyes open.

My grandmother, already wide awake, gently urged me to get up. “How about blackberry jam and milk for breakfast?” I could hear her stoking the fire in the glazed tile stove. It was the end of February, but winter was hanging on.

A Land of Legend

My grandparents live in a land of legend, in Transylvania, close to the mountains. The rhythm of nature has always guided their steps and, over time, has shaped traditions that became almost sacred. Every celebration has intricate rituals, still, at least for my grandma, there is something which doesn’t change.

The early dawn also found her beside the rustic oven baking bread and pastries that give off the smell of my childhood. It was her way of honoring a tradition, this time Dragobete – the God of Love.

She uses century-old techniques and recipes, but her “pup cu branza” (pie made of a local type of cheese, branza de burduf, and fresh dill, pup also meaning kiss in Romanian) would make every French chef jealous.

The old Dragobete tradition in a Wi-Fi village

Dragobete could be seen as the Romanian version of Valentine’s Day, but the similarities between the two pretty much end here.

The feast of this Eastern God of Love, usually celebrated on the 24th of February, has a mystical rather than a mercantile shade. It is not about offering red hearts or chocolate, it’s about performing magic rituals, being joyful, and even coming clean about who you love.

Locals follow a well-trodden path. The young girls and boys of the village meet early in the morning in front of the church, rosy-cheeked and dressed in their Sunday clothes. Attracting attention on this day guarantees that the year ahead will be full of love, joy and success, or so the legend has it.

The celebration is at its best when it’s sunny. The group will then spend the day in the forest or in the fields, where they will pick flowers or gather the herbs used in love incantations.

In some parts of the country, they will even look for nettles, one of the first plants to sprout as winter ends and also one of the top ingredients at this time of year for traditional dishes.

However, if the sky seems heavy or a blizzard is raging, the group will enjoy a sleigh ride or gather at someone’s place to tell stories. Before lunch, the tradition requires the girls to start running and each boy is supposed to follow the one he cares for.

If he catches her, he will steal a kiss and probably her heart. The gesture is not a game. It is a vow of love for the whole year.

A fine observer of the rural traditions is Carmina Maior, from the Astra Museum in Sibiu, one of Transylvania’s most influential cities. For her, Dragobete is a way to go deeper into the villagers’ souls, to understand how they are connected to their world.

“Dragobete was inspired by nature. People have seen how nature changes, how birds mate and build their nests at this time of the year and have copied their rituals,” she says.

Now, with the WiFi Internet in most of the villages, one might think that ancient traditions are long forgotten. But this is not the case. “Times change, customs change. Dragobete is evolving into a modern celebration,” she says.

As society changed, a rather recent custom has been added to the traditional ones: if you step on your partner’s foot on Dragobete, you will be the one to lead the relationship. This was sparked off in the urban population, as many people living in towns or cities have started to celebrate Dragobete in recent years, in an attempt to overshadow the imported Valentine’s Day.

Magic rituals to make him or her love you

The celebration of the Romanian Cupid-like God is mostly dedicated to women, no matter if they are searching for their soul-mate or are already married, and regardless of their age. The ones who honor it will to be protected from illness for the rest of the year.

“Even women who have a husband need to touch a stranger. That’s the tradition and villagers follow it. If you make a mistake, if you don’t do something properly, you risk having a bad year in love,” Carmina Maior says.

First, there are beauty tricks. “Women collect clean snow and melt it. They use pure water to wash their face, in order to have beautiful skin for the entire year and to be lovable. They also use it in magic potions,” Carmina Maior says. Villagers say this water is made out of the fairies’ smile.

For troubled couples, there isn’t a better time than Dragobete. Women have magical rituals to make their loved one fall for them once again. With an easy trick, they can even discover how the relationship will turn out.

A special plant with purple flowers is believed to be of great help in knowing whether the young couple will last or not. It is literally called love-flower.

Two seeds are planted in the soil and when the plants grow, if they lean and touch each other, it is a sign that the marriage will take place. However, the magic plant might also subject the two to public chitchat.

In the alleys of the village, hags mumble all the time, wondering who loves whom and why. At this time of the year, the rural community might find out about the weddings that will take place in the autumn, because on Dragobete, mock engagements, as well as real ones, can take place.

Above all, everyone’s cup of happiness should be filled on this day. “You must have a great time on Dragobete. This is how the tradition works. And villagers know it best,” Carmina Maior says.

It is one of the first European open-air museums of its kind and was set up in 1936. Located nearby Herastrau Park, it has 300 authentic peasant farms and houses from all over Romania.

It looks like a small village with old buildings, even wooden churches, and tall-roofed Transylvanian houses. The museum is visited by 300,000 people every year from Romania and abroad.

This museum complex is one of the largest in Europe, hosting four museums of ethnology and civilization in the city, a series of laboratories for conservation and research, and a documentation center.

The Museum is proud to present a group of windmills, an early form of bowling game from the Paltinis monastery, a mine from the Apuseni Mountains, some water-mills, a wooden ferry, and a fishery from the Danube Delta. Also, there are houses of shepherds, pottery workshops, iron workshops and a dance pavilion.

A masterpiece of the Romanian sculptor Constantin Brancusi located at the entrance of the city’s Central Park. Built between 1937 and 1938, it is a 5.13 m high triumphal arch, with folk motifs from the artists’ native region, Oltenia.

Close to the Gate of the Kiss there are three more sculptures by Constantin Brancusi that blend simplicity and sophistication: Coloana Infinita (The Endless Column), Masa Tacerii (The Table of Silence) and Aleea Scaunelor (Alley of Chairs). The artist’s parents were poor peasants, and he became the family shepherd at the age of seven. That was how he started carving wood. 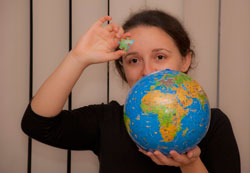 Find out when this year’s Dragobete will take place in Romania.

Ada Mihai is a journalist based in Bucharest, Romania. She likes to go to unusual places and meet all types of people.