Scotland: The Legend of Sleepy Da

Scotland: The Legend of Sleepy Da

[This story is included in the Bay Area Travel Writers anthology Travel Stories From Around the Globe, a collection of 23 stories by BATW members full of “surprise, serendipity, connection, and personal transformation.”]

Stepping onboard the luxury sailing vessel a wave of irony hits me: first, I’m en route to California’s wine country aboard a ship filled with oenophiles and I don’t drink wine. Second, the other guests are all couples—and I’m in the midst of a pending divorce.

Still, irony has a way of morphing into hilarity, so I go with the flow and introduce myself to the eight ‘40-somethings’ who’ve traveled from Boston to enjoy a long weekend aboard one of American Safari Cruises’ small cruise ships.

After stowing my luggage inside my cabin, I head upstairs for dinner. Thanking the gods the seating onboard isn’t romantic two-tops (at which I’d be sitting unromantically by myself), the conversation at our communal table flows easily amongst the jovial friends who’ve known one another for almost twenty years.

They’re an amiable bunch and are anxious to include me, asking questions about my travel writing, what it’s like to live in the “Golden State,” and where the heck my husband is.

Around 10 p.m., the women unanimously announce they’re exhausted from the day’s travels and are going to bed. The guys, however, aren’t ready. Heading outside to smoke cigars and enjoy a nightcap, they invite me to join them.

At first, I politely decline; but really, I’m not sleepy. So I step outside and take a seat, because sometimes the best stories are told around a campfire—even if there are no flames, and “common ground” is the back deck of a luxury yacht.

“Ok, we know you don’t drink wine,” says Jimmy, a fair-haired lawyer. “But what about some port?”

“Vodka?” asks Ryan, the barrel-chested owner of a construction company. “You don’t drink wine but you drink vodka?”

“It’s an Irish thing,” I say. The men all nod knowingly as Patrick (an older version of Colin Farrell) disappears inside the ship.

I ask them what made them choose this particular voyage, and am told they travel as couples once per year, then do a ‘guys’ trip and a ‘girls’ trip as well. The guys always go golfing, but when the women get involved, the couples’ trip becomes more…genteel.

Patrick reappears—a bottle of Grey Goose in one hand, a glass with ice in the other.

“Now,” he announces from the doorway as he pours me a shot, “you can really join us.”

I accept the vodka and take a sip. The guys settle in to their chairs, the tips of their cigars glowing amber and red against the darkened sky.

“What was the last golfing trip you took?” I venture into the silence.

Michael, an investment banker with a slight limp, rests his back against the railing. “That would be Scotland,” he answers.

He smiles. “We certainly hope so.”

Michael turns to Jimmy, but nods towards me. “Why don’t you tell her about ‘Sleepy Da’?”

Jimmy downs the last sip of his port, then reaches beside him to refill his glass. “It’s a long story…”

Jimmy leans back into his chair, contemplating the vast openness of the San Francisco Bay.

“Like a lot of Irish kids, we called our dad ‘Da,’” he finally says. “Da loved all the guys, and really liked hanging out with us—especially after my mom died…”

“We were on a trip to Florida when he got the nickname ‘Sleepy Da,’” Michael interjects, a smile tugging at the edge of his lips. “We’d been out golfing all day, and then headed into the hotel bar to continue our brag-fest. Jimmy’s Da was beat, but he refused to leave the party until finally, at about eleven, he got up from his bar stool and announced that he was going to bed.

“A little while later the rest of us left the bar, went to the elevator and pushed the button. When the car arrived, there was Da—standing straight up inside the elevator, sound asleep!” His smile had turned to a wide grin.

“He’d been in there for a half-hour,” Ryan fills in. “Sleeping against the wall. So from that point forward, we called him ‘Sleepy Da’.”

The guys were laughing at the memory of it, shaking their heads in unison like blades of grass in a field.

“Anyway, that’s how my Da got his nickname,” Jimmy says. “And about a year later, he died.”

“We really loved him,” says Patrick. “And we knew he was going to miss those golf trips we all took together. So when Jimmy asked us to take one last trip to Scotland with Sleepy Da, how could we say no?”

I wrinkle my brow, not sure I understand. “Do you mean you took the trip with his memory, or did you actually take him?”

“We took his ashes,” Jimmy says. “I figured if we could get him to a golf course in Scotland, and scatter his ashes out over the green, he’d be eternally happy.

“So we hopped on a flight for the UK, with Da safely stashed onboard. And getting through Customs and Immigration…” his voice trails off. “Well, that was close. Anyway, we finally got to the course—and it was pouring rain.”

“Naturally,” says Ryan, “it being Scotland and all.”

“So we did what any self-respecting Irishman would do,” adds Michael—still leaning against the ship’s railing. “We headed to the nearest pub.”

Jimmy takes a long draw of the port, rolling it around in his mouth. “It was ‘blowing a gale,’ as they say. Literally, the sky was coming down it was raining so hard. We sat in that pub for hours, surrounded by golfers all telling their tales of misery or joy. And I looked around and thought: Wait a minute…why sprinkle his ashes on the course? Why not leave him here? I mean, what could be better than that: your ashes are inside a pub, right next to a golf course, all safe and warm. So that’s what we decided to do.”

The boat begins to list slightly in the water, a cool breeze rising up off the bay. The guys look to one another, and I sense there’s something that’s being left unsaid.

“Did you end up leaving him there?” I ask.

Ryan rubs his belly underneath a Hawaiian print shirt, making the hula dancers and palm trees on the fabric sway beneath his enormous paws. “Turns out, the pub’s owner overheard us at the bar, talking about what to do with Sleepy Da,” he says. “She came up to us and offered to take the jar and put him up on the top shelf. ‘For safekeeping,’ she said. That way, if we ever decided to go back and sprinkle his ashes over the course, he’d be there waiting for us.”

“But after a couple months,” Jimmy says, “I started to get nervous about him, wondering if I’d done the right thing. So when I found out Patrick was heading back to Scotland, I asked him if he’d get out there to…you know…check on my Da. To see if he was ok.”

Patrick reaches over and pours me a small shot of vodka, and I watch him intently—trying to ferret out the ending. But his face remains a blank slate in the moonlit night.

“I get to the pub,” he tells me, “and go straight to the bar. I look up, and there he is—Sleepy Da. Just sitting there overseeing the joint. I was happy to know I could go back to Boston and tell Jimmy he was good.

“I grabbed a seat at the bar, still looking at the jar holding Jimmy’s dad. The next thing you know a stranger starts talking to me. ‘So you’ve heard about Sleepy Da, then, have you?’ he asks. ‘Local legend has it if you drink a toast to him, you’ll have the best golf game of your life.’”

Michael, Jimmy and Ryan all start to chuckle, the strains of their laughter bolstering Patrick’s story.

“Of course, I’m crackin’ up on the inside,” Patrick continues, “knowing Jimmy is going to love hearing this. For the rest of the night I hang at the pub, watching everyone drink their toasts to Sleepy Da, and then before I leave I drink mine, too—alongside the guy who’s been sitting next to me all night.”

“Sooo…did you end up having the best golf game of your life?” I ask.

I turn to Jimmy, waiting for the answer. He runs the fingers of his manicured hand through his hair. I think I see a sparkle in his green eyes, but I’m not quite sure.

“When Pat got home from Scotland, he told me about the toasts in the bar and how well he’d golfed while he was there. But the kicker, he said, came the next night—when he went back to the pub.

“He’d gone back to say goodbye to Sleepy Da and let him know he’d be home soon, and would put my mind at ease. Then, in walks the guy from the bar he’d been talking to the night before. He spots Patrick and walks over to him, looking pretty content. Turns out, the guy did play the best golf game of his life, and he’s ecstatic. So he buys a round of drinks for the house, and everyone in the pub drinks a toast to my Da.

“I was really touched, you know, hearing all of this,” Jimmy continues. “Not only had Pat gone over there and spent a wicked day out golfing, but apparently Da had made this other guy’s day, too.”

Jimmy reaches down once more, lifting the bottle of port and refilling his glass. I notice the other guys have done the same, making sure all their glasses are full. Patrick comes up alongside me, holding the bottle of Grey Goose. I look up at him.

“Of course, the best part of the story is that it turns out the guy who’d sat next to me in the pub is an avid golfer,” says Patrick, pouring another small bit of vodka atop the melting cubes in my glass. “In fact, you may have even heard of him…”

“The golfer’s name,” Jimmy tells me, “is Sean Connery.”

“To Sleepy Da,” says Patrick, holding his glass in the air.

“To Sleepy Da,” we answer back, and drink a toast. 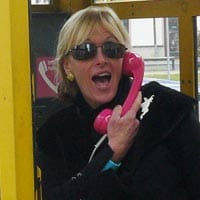 Erin Caslavka is a writer, editor and copywriter based in San Francisco.

www.gonomad.com
This article was last updated Feb 12, 2019 @ 4:26 pm
If we've inspired you to travel with this story, why not check out the prices to get there and make it happen. Search airfares, hotels, and rental cars here. Thanks!