A Birth in Bali

A Birth in Bali 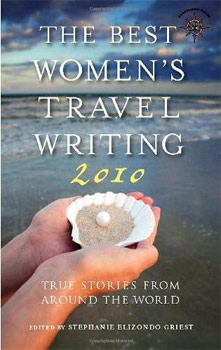 Stephanie Elizondo Griest, editor of The Best Women’s Travel Writing 2010: True Stories from Around the World, grew up in a family of courageous travelers, all of them male. She yearned to tell stories of incredible adventure but lacked female inspiration. It was not until Griest’s senior year in high school that she began to believe being a female world traveler was possible and within reach.

With thirty countries and all but three of the United States under her belt, Griest wants more. Travelers’ Tales publishes an annual collection of women’s travel writing as proof that we can do it. This anthology features women who have dared to climb up a volcano in the Ecuadorian wilderness, witnessed the birth of a child in Bali, and made personal discoveries of life and love.

“If you want to fall in love with the world, really fall in love with it, watch a birth,” said Liz Sinclair, author of Bali Birth. Liz moves to Indonesia, where she volunteers at a birth center for poor families. After a night out on the island, she is summoned to witness the “gentle birth” of a baby.

Reluctant and unsure if she would be intruding upon such an event, Robin, a midwife, reassures her that the woman in labor would not mind. Expectations of a quick and easy delivery are not realized when the birth becomes a long and arduous process. The woman is fully dilated but refuses to push the baby out.

Soon-to-be mother and father are scared, but their emotions are in stark contrast of each other. The woman’s screams are of extreme pain and worry. The husband sits silently, eyes wide, unsure of what to do. Robin’s patience begins to wear thin. Immediate action must be taken. She tells the woman that she will have to go to the hospital if she does not push the baby out. The woman would rather die than go. It is decided that a water birth will help to relax her. It is a success. A baby boy is born. It is learned that during the birth of her first child at a hospital, the woman was hit to make her be quiet in labor. She was frightened that Robin would do the same.

Excerpt from Bali Birth, in the new anthology The Best Women’s Travel Writing 2010

The woman was on a bed, half sitting, half laying, moaning. She was naked. Her skin was dark for a Balinese, sun-darkened by outdoor work. She had huge globe-like breasts that hung pendulously across her great moon belly. A pregnancy band, a band of darker pigment, stretched across her belly. Her hair was long, matted to her neck with sweat in the hot, still air of the birth room. A lone fan turning lazily high up on the ceiling did little to dispel the tropical heat.

The smell of birth

The woman was growing increasingly agitated. Her moaning was turning to a kind of guttural screaming, which made something in the lower vicinity of my gut tremble. The woman was thrashing on the bed, knocking her husband as he tried to stroke her arms to comfort her. Robin was looking very solemn. Every time she spoke to the laboring woman, the woman would cry and moan louder.

She was covered in a sheen of sweat that glistened in the glare of the overhead light. There was a strong smell in the room, like a mixture of every type of odor the body could emit, earthy and musky, combined with an antiseptic tang of amniotic fluid. This was the smell of birth, the second midwife explained.

The staff directed the husband to sit at the edge of the tub, behind his wife. His legs dangled awkwardly into the tub. Finally, he squatted on the edge, looking uncomfortable, holding his wife’s shoulders tentatively. The laboring woman sank back into the tub, into the water. Her body seemed to lose some of its tension. The second midwife began to scoop warm water over the woman’s breast and belly with a blue plastic pail. Robin talked steadily with the woman, keeping one hand on the woman’s knee.

Soon, the woman was nodding. She was visibly relaxing. Suddenly, a spasm passed over her, she leaned forward and cried out, one hand going to her belly. Robin leaned forward, peering into the space between the woman’s legs.

She spoke more urgently as the woman made short, high sounds through her nose. Another spasm gripped the woman and again she cried out, leaning forward. Robin parted her legs, and her right hand seemed to be cupping something between the woman’s legs. The staff began to intone a low chant, a Hindu song for welcoming new life into the world. Unaccounted tears sprang into my eyes.

I crept over to the bed to look at the baby. His face was still read and wrinkled. His mother was touching him softly, as if she couldn’t yet believe he was real. The father kept grinning as he patted his wife. The woman looked up at me, directly at me, and smiled. It was a smile that defied the reality of her hardscrabble life—a smile full of pride, of joy. Tonight, she wasn’t one of Bali’s poor, who toiled in the rice fields and never quite had enough to eat. Tonight, she was a victorious heroine who had overcome a great struggle. Tonight, she was beautiful.

Liz Sinclair is a writer with a degree in anthropology. When not in Bali volunteering, she lives in Melbourne, Australia. Elayne Badrigian is a recent graduate of the University of Mass and a former GoNOMAD editorial assistant.