Yurts and Cabins in OR and WA State Parks

A Well-Kept Secret and a a cheap place to stay

I opened my eyes and gazed up at the glass dome above my head. Overhead, Douglas Firs stretched up endlessly into a velvet sky stitched with a million silver sequins. I was in a yurt in Oregon, enjoying a peaceful retreat in one of many such round structures you can rent in parks in the western US.

A blurry primrose moon glided ghost-like through charcoal trunks. As I floated in the all-encompassing silence that echoed the curve of the yurt I was lying in, I felt like an unborn child curled up in the womb again: mind empty, soul utterly at peace, senses heightened in a world newly discovered.

Then I realized I needed a wee. As I stumbled through the huddle of yurts in the forest clearing, their orange lights glowing in the darkness, I tried not to think of the possibility of bears lurking in the shadows, and instead breathed in the cool pine-filled night air.

It felt like I was walking into a Grimm’s fairy-tale and I half expected to see Little Red Riding Hood or Hansel and Gretel slinking through the trees. I swept my torch from side to side, hearing the distant sound of an owl and a rustle from somewhere deep within the undergrowth: Bear, coyote, elk, deer, racoon, skunk, fox or rabbit? All these creatures inhabit the woods at Seaquest State Park.

The State Parks of Washington and Oregon showcase the best of the stunning raw beauty that is the Pacific Northwest. And it just so happens that many of these parks offer yurts, rustic cabins and even tepees for rental at bargain prices.

Whilst most visitors to the US are unaware of their existence, Americansin-the-know book State Park accommodation up to a year in advance of their vacation. The landscapes in and around the parks provide the traveler with a wealth of breath-taking experiences.

My family and I traveled from State Park to State Park throughout Washington and Oregon. We stayed in Uncle-Tom cabins and yurts set in raw wilderness, deep within ancient woodland, aside tumbling mountain-rivers, on the shores of desert lakes or perched high above rocky sea-cliffs. State Park accommodation, I discovered, is America’s best kept secret.

On the Trail of the Volcanoes

Seaquest State Park: The yurts at Seaquest State Park in Washington state are rustic; each containing a roughly hewn bunk, a futon, a basic wooden table and four chairs. Outside, there is a fire pit, water tap and picnic table – and a makeshift shelter in case of rain. At a snip, these basic but beautiful circular dwellings can be rented at $67 in the high season and for $57 in low season. Their simple beauty in magical surroundings is priceless however.

Beyond the clearing, there are 475 acres of woodland and six miles of cycle and hiking trails. A short walk and you reach the Mount Saint Helens Visitor Centre on the shores of Silver Lake.
Just up the road is the legendary Mount St Helens. The volcano is a forbidding sight, its beauty destroyed by an eruption in 1980. No longer a fairy-tale snow-capped peak, it looks more like a decayed, broken tooth.

Charred trees lie strewn across the landscape. Naked tree trunks line the hillsides. The earth is ripped up and stripped bare as if some enraged ogre had trashed the landscape. New life, however, is slowly emerging in the wasteland.

There’s a Flintstone-esque cone mountain with a helter-skelter road leading to the top. At its base, there’s a surreal cinder-strewn (molten lava) landscape with an interpretative walk winding through it. It feels as if you are picking your way through the remains of a giant’s barbecue.

Also in the area is a mile long lava plug cavern. Rent tilly lamps and they will provide welcome warmth in this chilly environment, as well as necessary light. Further into the mile-long cavern, the plug shrinks to a narrow tunnel, barely 3 feet high – and the last few yards are so low, you have to wriggle on your tummy like a worm. Not for the faint-hearted but an adventure for the young and young-at-heart.

Travel south of LaPine SP and visit Crater Lake. This flooded caldera is breath-taking in scale and beauty. The glassy,deep sapphire-blue surface of the water and the contrasting rich red is a visual feast for the eyes.

The Lonely Sea and Sky

On the Oregon coast, forest sweeps down to rocky shores, sea stacks rise out of the surf, jagged sea-cliffs rise dramatically from the ocean swell. Hidden coves and beaches stretch along the coastline.

And there’s a wealth of wildlife too: sea birds such as osprey and baby murres, marine gardens lined with star-fish and sea anemones;seals, sea lions, whales and dolphins.Seastack at Arch Point Lookout, Pacific Northwest.
Cape Blanco State Park: Rooms with a view: Four cabins, Eagle, Falcon, Osprey and Hawk perch high above the Pacific Ocean. If you are lucky, as we were, you might see one or more of these magnificent birds of preywheeling across the sky or standing sentry on a sea stack. Coastal paths wind their way steeply down from the cabins to the shoreline. Within walking distance, there’s a lighthouse and the historic Hughes homestead.

Alpine Forest to Desert in the Cascades

Wallace Falls State Park Cabins are surrounded by waterfalls (including Wallace Falls with a drop of 265ft), lakes and a river. Beyond the cabin doors, there’sthe opportunity to go white water kayaking, mountain biking and hiking along the extensive trails. Nearby, you can visit the German-styled town of Levingworth with its shuttered windows, balconies and painted walls. Walking through town, you might even catch sight of a character dressed in Lederhosen and Tyrolean hat replete with feather – as I did.

Pearrygin Lake State Park Just outside Levingworth, the landscape changed abruptly from alpine to desert. At Pearrygin, the lake, just a stone’s throw from the cabins, provided a welcome respite from the intense summer heat. Not far from Pearrygin is another themed town. This one is the wild-west town of Winthrop. John Wayne would have felt right at home here.

Something Different
Mount Spokane State Park in Washington State: Sleep in a fire lookout atop a mountain at 5,129ft. Th views won’t disappoint.. ($77 -$87)

Clyde Holiday State Recreation Site in Oregon: Try a tepee by the John Day River in pristine nature. Deer and elk are known to wonder through the Park. ($25) 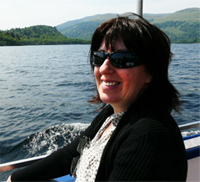 Helen Moat has won several travel writing competitions, including runner-up with The British Guild of Travel Writers. Her work has appeared in a number of online travel magazines and in The Daily Telegraph. You can find more of her pieces on her blog, Moathouse.