A Magnificent Hotel on a Hill with a View, Off Season

We headed to Watch Hill Rhode Island in mid-March on a day when the weather was unstable but dramatic.

The threatening gray clouds seemed to be on the way out as the sun kept trying to make an appearance, occasionally casting lines of light on the tumultuous waves and huge ocean expanse. Pre-season this time of year would probably mean spending as much time inside as outside. My hope was to see how this balance played out not only physically, but spiritually too.

Watch Hill is best known as a seasonal ocean resort village. Its pristine beaches and idyllic harbor is set on Napatree Point, a peninsula jutting into Block Island Sound–the most westerly tip of the tiny state of Rhode Island. To the north the Pawcatuck River flows into Little Narragansett Bay, creating an estuary and haven for wildlife, which in turn flows into the Atlantic Ocean.

Watch Hill is also famous for the Flying Horse Carousel, the oldest continuously operated carousel in the United States designated as a National Historic Landmark. It was built in 1888 by gypsies.

Different from most carousels, its wooden horses are suspended from chains. With increased speed they seem to fly. Each horse has a mane and tail made from real horsehair and each horse a real leather saddle.

In season, the local restaurant the Olympia Tea Room is also well known and has been around for eighty-nine years. Going there is like stepping back in time. There’s an old soda fountain and a black and white checkered floor. If you’re lucky, you can snag a table outside and have a sunset view accompanying great food. There’s a 2000 bottle wine cellar and hundreds of corks decorate the front window. Without all the seasonal attractions there would be less distractions.

Perched on the Bluffs

The Ocean House hotel was our base. Perched on the bluffs of Watch Hill, it was newly recreated to replicate the original hotel first built in 1868, just after the Civil War.

Inside our room we could see the sweeping view to the ocean below. Keeping our terrace door open, we could hear the pounding surf and smell the sea air. Outside, the sun momentarily triumphed and clean afternoon light streamed in. A glorious seaside escape, in March in New England.
The Ocean House was the destination for the wealthy to escape summer in the city. It was immortalized in the 1916 silent movie American Aristocracy staring Douglas Fairbanks.

In 2003 after years of falling into disrepair and not up to current building codes the Ocean House
closed. That was when Chuck Royce, a local Watch Hill resident, stepped in and purchased this historic property with the intent to preserve an icon.

When plans to renovate the building proved impossible due to lack of structural soundness, Royce decided to replicate the property as close to the original as possible. After five years of construction and $146 million the Ocean House reopened its doors on Watch Hill. 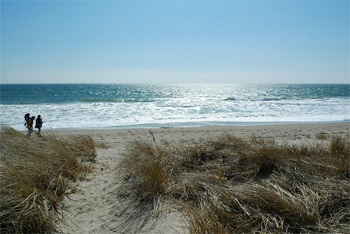 He created a grand Victorian Hotel with the integrity of the past. More than 5,000 artifacts and architectural details were saved and cast in plaster. The 19th century elevator is back to work. The original reservation desk is back in place. The stone fireplace in the Great Room was dismantled stone by stone and rebuilt. An expansive veranda offers a timeless view and is the perfect setting for sunset gatherings.

Panoramic View of the Sea

We arrived just in time for a late lunch. Because of the proximity to the shore, the ocean was omnipresent. There were glimpses everywhere. I could see the panoramic view beyond the wall of windows. Before I
could even get to our table I was mesmerized by the dessert station, which looked like an exhibit of edible sculptures.

A chocolate peanut butter torte was topped with a blue and red crystallized sail that looked like a wave. It wasn’t long before a slice appeared at our table with a candle and wishes for my dear friend’s birthday. Creative food always warms my heart especially when it reflects the environment.

Time to go outside. A walk down to the water followed. A glance back to the Ocean House partially revealed the pale yellow Victorian hotel, now looking timeless shrouded in the fog- so much a part of the
elements but also at the mercy of them as well. 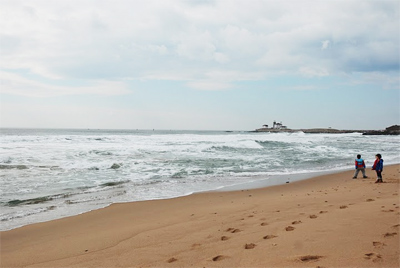 Weather played its role in transforming the land. Originally named by the Niantics a Naragansett Indian Tribe meaning neck (nape) of trees, Napatree was once heavily forested until destroyed in the Great September Gale of 1815. Thereafter, came the famed hurricane of 1938 that changed the landscape pretty much to as we see it today. The Hurricane wiped out thirty-nine homes and took the life of fifteen people. Some say the land is haunted and claim to hear ghostly voices.

Today, Napatree Point is a slender sand barrier, one-and-half miles long and serves as a wildlife refuge and ecological preserve. It is a haven to birds and is home to the endangered Piping Plover as well as to ospreys. It’s a resting area for migratory birds. The walk around the peninsula allows for both bay and ocean experiences with narrow trails to cross over the dunes.

I now had a real “sense of place”- both historically and physically.

Another sensory experience waited. It was time to go inside- really inside for a treatment at the state of the art spa- Oh! Spa. I chose the Hot Ocean Stone treatment. The soundtrack was ocean waves. Krystian was my masseuse. I wanted to try a treatment that reflected the environment. Krystian explained that the stones were found right on the beach and polished retaining the energy from the elements. Every so often he lays the stones on the beach to “re-charge” and absorb the sun and the sea.

He also explained the benefits of this treatment. “The heat allows for deeper muscular work and integration in the entire body for true healing”. I truly went inside. It was not easy to come back to reality. I sat in the relaxation room sipping strawberry water gazing out to the ocean and the last light of the day. Blue turned orange and the water glowed. So did I!

I recommended this treatment to a guest. Here’s what she had to say: My Ocean House hot stone massage 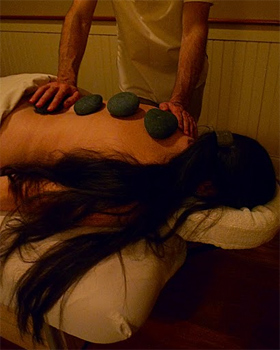 was wonderful. The therapist worked actively with the stones, starting out on an area of your body with oiled hands, then oiled stones and hands together. The stones make that familiar clicking noise you hear when standing on the shoreline as waves roll them over and over- wonderfully soothing and cathartic. Works beautifully and for most of my hour I drifted in that no mans land between sleep and consciousness.

We sampled some products from a local company, Farmaesthetics known for its products that are “farm to face”. Brenda Brock, seventh-generation from an agricultural family grew up making homemade concoctions in the kitchen. With this inspiration and her grandmother’s recipes she’s created a line of organic herbal and floral skincare products. Her products reflect the agrarian farm source- like Midnight Honey Body Buzz.

The next sensory experience was dinner. The Seasons Restaurant at the Ocean House features classically inspired farm-to-table cuisine of the Atlantic Northeast. The culinary team includes a dedicated food
forager using local and sustainable produce. The hotel grows as much as it can in its own garden. Director of food and beverages, Klemens Zachhuber tells us that they try to use food within a 150 mile radius.

In the fall the kitchen presses apples for cider. The cider mash goes to the compost bin. Klemens tells us: “We get our fish from the nearby Stonington Coves. The fish is still moving on dock in swimming condition” The philosophy is “nose to toe” using the whole animal.

A Seat at the Bar

Drinks here are all made with fresh ingredients and fruits. There are no pre-mixes. It’s the real deal.

We chose to sit at the counter bar facing the open kitchen. The menu changes daily. We chose the chefs tasting menu paired with wines. The first dish was a beet salad- the beets from the local Schartner Farm.
Not only did it taste unlike any other beet salad I have ever had it looked like a work of art. In addition to yellow and red beets there were radishes, pickled shallots, green apple gelee- all topped with Narragansett Creamery feta- true taste treat.

There were many dishes to follow. Young lamb as a raviolo with preserved lemon and native arugula, Bomster Sea Scallops prepared with local sea kelp from the nearby Stonington Seafood Harvesters and White
Pekin Duckling from Cresvent Farms with a green apple tart tatin and braised Savoy cabbage, just to name a few.

After a full belly and a full day, the sound of the waves lulled me to sleep. The next morning I started my day with Dharma Yoga. Time to go inside- really inside. The hour-long class consisted of postures, breath and meditation. Totally relaxed but energized I decided to try the 20-meter indoor salt-water lap pool with an ocean view.

It was the next best thing to actually jumping in the ocean, which was about 58 degrees compared to the near 80-pool temperature. In an elegant and serene setting I swam and floated. Aside from the 12,000 square-foot spa, there’s a state of the art fitness center open 24 hours also with ocean views. 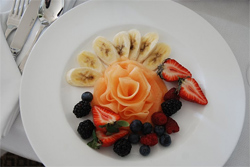 Breakfast at the Ocean Hotel.

After a long walk around Napitree I came back inside for Klemens Zachhuber’s flambé cooking class in the cozy clubroom. He started with the history of Bananas Foster. “We all like to play with fire as long as nobody gets hurt.” A guest volunteered and soon the sugary, buttery bananas were aflame. We had a taste of the warm sauce and bananas over vanilla ice cream. A simple and easy dessert to impress at a dinner party!

As the weekend drew to a close I realized that inside became outside and outside became inside as the two merged and formed a perfect balance and blend of all the elements. The timelessness of the ocean energy and movement brought stillness and peace. On the drive home I sampled a dark chocolate sea salt caramel made by the local Hauser Chocolatier and once again it reinforced the blend- of outside, inside.