A typical weekend in southern Mozambique should include at least some fishing and an exceptional dive or two but, for a certain time during May, only two activities need apply: Rock and Roll.

Dressed in black, legs apart in the power stance, the bundle of first-rate musicians gave a stellar performance; choice of instrument: the air guitar. For a moment, they rose like gods above the rest of the revelers as they jostled for prime position on the staggering wooden table.

The official show might have been over, but the performance never stopped. A stone’s throw away from the pumping little bar, the mellow Indian Ocean took it all in her stride as the music drifted along the miles of deserted beach and disappeared under the milky moon.

Usually, the tranquil spot of Ponta Malongane in southern Mozambique is better known for its supreme diving sites and excellent fishing, but for a few days every May (nowadays also in August) this rather isolated haven is transformed into a carousal of soulful tunes and die-hard parties. The reason: The Subterranean Rhythm and Blues Experience, better known as STRAB.

The music festival started in 2003, when a group of South Africans decided to add some live music to their diving-weekend in Ponta Malongane, just 11 kilometers north of the South African border crossing at Kosi Bay. Here, a bit of the appealing Mozambican atmosphere already revealed itself when I visited in 2010.

“Next time”, the official lazily smiled when I wanted to hand over the R17 visa fee (applicable to South Africans). If traveling from South Africa, this spot also serves as a crude distinction between the two neighboring countries; the tarred road stops dead in its tracks, while a sandy path continues towards the festival campsite.

Anything but 4×4 vehicles were locked up and left behind in South Africa. Visitors, tents, guitars, amplifiers and the rest were unceremoniously bundled in the back of trucks or jeeps and transported

Piri Piri shrimp is one of the specialties you can find on a Mozambique menu. photos by Petro Kotze. 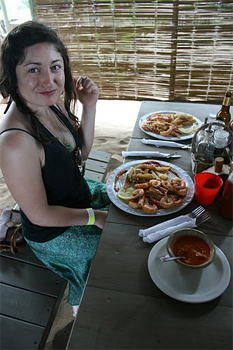 deeper (though admittedly, not much) into Mozambique. Past green grasslands, under blue skies and through scattered spinach-filled vegetable patches we skid, over dunes and past the occasional vivid stall lined with carved, wooden figures. Twice we stopped dead, but the driver expertly gave life to the rattling vehicle with his screwdriver.

And so it started. Four days filled with music, sea, sand and liters of beer. Set in a campsite, attractions included a restaurant, a beach just around the first dune and a small bar perched against the luke, warm Indian. Local beers Laurentina (R15) and 2M (R15) competed with R&R’s (R25), a much-adored local specialty with just about enough rum added to the raspberry flavored fizzy drink to properly get the show on the road and you shaking all night long.

The festival was named after the Bob Dylan song “Subterranean Homesick Blues”, a suggestion by first performer, legendary South African musician Piet Botha. Since the 2007 festival, fans have regularly filled the campsite to capacity. Not that this makes it a huge gathering – mostly, about 750 people can be accommodated. But what they don’t make up in numbers, they make up in oomph.

Two stages were set up for the
four-day merriment; the first at the bar, which boasted a view beautiful enough to make a grown man weep, while the second, main stage, was situated below. The days were a mix of lying on the

Beach scene at the festival 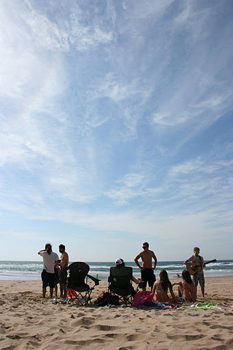 beach, lazing in front of the stage or leaning against the bar-counter. In the mornings, you could get fresh pau (a dense, traditional Mozambican bread) from the kitchen, before heading to the water, snorkeling, meandering over to the neighboring Ponta do Ouro (a couple of miles off, the walk will have you puffing) or the couple of local pubs just outside of the camp for a touch of adventure.

Lazy tunes floated over the beach from the late afternoon onwards. As the sun was sinking low, the party moved to the main stage, where, regardless of the habitual mild Mozambican temperatures, things really started to heat up. Rock, blues and some reggae spiced up the evenings as people started jumping and shaking the night away. The after-party moved back to the bar, where the little micro-universe of revelry continued through the night. It was here where the elegantly wasted guitarists let it all go in ode to the DJ’s tune: smoke in the water, fire in the sky.

Shine on you crazy diamond

As the sun came up, it shone a different light on the surroundings. Sometimes, Ponta Malongane’s proximity to its neighboring South Africa creates a surreal reality, complete with big 4×4’s roaming through the little dust roads in search of the best shack-shaped bar to watch the Super 24 rugby games. At the Blou Bul Bar (named after a local South African rugby-team) Afrikaans pop tunes blasted away in the background. “Sharks fans also welcome”, another sign beckoned (referring to a competing rugby team).

The stage at the bar with the best view in rock and roll. 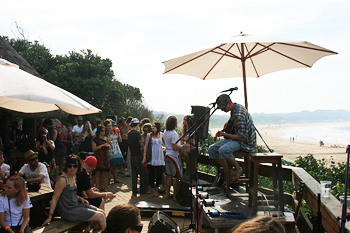 However, the festival is not just about rocking till you drop, although it comes pretty close. Done with “gratitude for the difference Mozambique has made in the lives of those who have shared the STRAB experience and for the kindness of the people” donations have been made to assist the local community every year.

This has ranged from supplying the local school with soccer equipment and stationary to supporting the Mineseeker Foundation (which turns minefields into farmlands) and the Community Church of Mozambique’s Children’s’ Home.

On the last day, we were perched on our bags, awaiting our 09:00 transfer out of the country. It was 10:30. Slightly tired and hung-over festival goers could be seen emptying the last dregs of their cooler-boxes’ content. “Don’t waste your soda,” cautioned a passer-by as he held his vodka filled cup for a last drop of forgotten Coca-Cola. It was time to go.

Soccer on the beach. 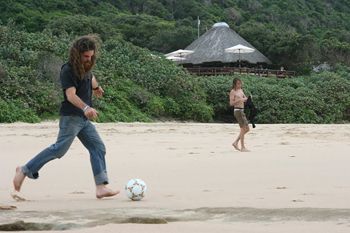 Loaded on the truck, we bumped and shook back to the border, ready to tackle the tarred road back to South Africa. STRAB might not be the most daring adventure into dark Africa, or even Mozambique for that matter; it is however, in the words of the Rolling Stones, “only rock and roll…but I like it”.

Prices range from about R695 for three nights, general camping to R1 520 for a six-bed chalet. Meals at the campsite range from a R55 breakfast to a R95 dinner or a R210 prawn platter.

Transfers from the Kosi border are R60, one-way.

The festival is organized from South Africa, and because of its close proximity, and predominant South African clientele, prices are give in Rands. Currently, one Dollar is roughly equal to R6.80. 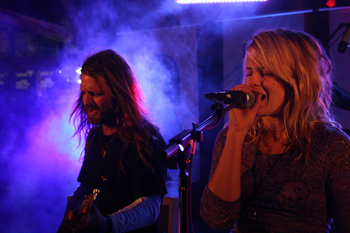 The easiest way to reach the festival is from the South African border, from where transfers can be organized when you book your ticket.

FORR (the Fellowship of Rock and Roll), another three-day rock festival at the same venue, takes place in August (for information, visit www.forr.co.za).

Diving / snorkeling prices:
o One dive costs R220, eight dives are R1 7 25, while renting snorkeling equipment for the day will set you back R30. 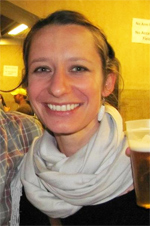 Petro Kotze is a Johannesburg-based freelance journalist specializing in travel, science and the environment. In between articles on the fate of anything from wetlands and wildcats to elephants and estuaries, she makes time for cold beers on warm beaches in Mozambique, or attempted enlightenment in Indian meditation retreats in. Notebook in hand, Petro has written from sheep farms in the Shetland Islands to the jungles in Cambodia; from slow boats in Laos to the deserts of Namibia.

Top Ten Free (or Cheap) Things to Do in Cape Town