Yazd: An Oasis City In the Desert

Yazd is a place so romantic that many Iranian girls choose it for their honeymoons. Statistics show that the number of couples divorcing is surprisingly about 0 percent! In Yazd, Iran, you’ll find many couples who have just gotten married enjoying time there.

Here you get the feeling you’re traveling a thousand years back in time. This is the center of the Zoroastrian religion, at the heart of the Islamic Republic of Iran.

But this is not the only reason that any people love to visit Yazd; there are so many rare and amazing things about this ancient city!

As we entered the city, the famous wind-catchers of Yazd grab the attention: tower-like buildings settled on every rooftop. But what is the function of these wind-catchers?

Unlike other old cities and civilizations, Yazd wasn’t built near rivers but situated on Iran’s biggest desert, which covers approximately the whole center of the country.

When Gravity Fades Away, In front of Your Eyes!

The two Iranian Guides who were accompanying us on this trip were explaining everything to us both in English and Italian. Although somehow it was clear to everyone that they might have a cooling function, they kept the answer to themselves and forced us to wait for half an hour.

So we kept on going on the tour bus. We were then in “Dowlat-Abad” gathering under a wind-catcher!

The wind-catcher has two tunnels that go up to the sky. The tour guide took her handkerchief and let go of it; suddenly the handkerchief went up, although gravity was working there!

Actually one of the tunnels was sucking the air up and the other was forcing it down; under the pushing air tunnel, there was a small pool of water which helps the air to cool up and work as an air conditioner and the other tunnel helped to circulate the cool air inside the house.

The wind-catcher of “Dowlat-Abad” in Yazd is a fine example of Persian desert architecture, one of the most important monuments in the area. Every tour spends several hours there. The wind-catcher is located in a beautiful and ancient environment that forces you to take some memorable photos for your Facebook profile!

Always-Burning Sacred Flame in a Temple Fire in Yazd

One of the things which made this city with over 3000 years of history more interesting for every tourist is “the always burning sacred flame in a Temple Fire” in Yazd! The sacred flame, behind glass inside a small museum, has been burning since about 470 AD and was transferred from its original site in 1940.

This attracts Zoroastrians from around the world for a visit. There are also a couple of paintings here, including one of Zoroaster.

Since Yazd was built up in a desert, the question is how this ancient civilization survived without water? All over Yazd, there are many aqueducts which have been dug down deep in the city. Don’t miss visiting Yazd’s old aqueducts; all around the city, when you go down a long staircase, you will reach cold, clean water which really is a blessing in that hot, dry region.

The whole City of Yazd is a UNESCO  Site

Something really inspired me about this city made of mud with ancient structures everywhere. It made me feel that I was living thousands of years ago, so I did a search on the web about it. 700 km of Yazd is on the UNESCO World Heritage list, and deservedly so.

The historical structure of Yazd is a collection of public-religious architecture on a very large scale, comprised of Islamic architectural elements from different periods in a harmonious combination with climatic conditions.

Walking through Yazd is very interesting. There are lots of handicraft shops in which many old people are continuing their artistic careers since their childhood. People are friendly, and many know English and came to us smiling and started talking to us. Some of them even asked us to share their supper in the park in the evening!

We are leaving  by bus and have just time to glance at the very beautiful landscape outside the bus; but there are two places that we couldn’t ignore, so we stopped the bus and went out for a quick photograph and a closer look.

About 1.5 km west of Islamiah historic village, there is a mountain called Oqhab-Kooh (Eagle Mountain) because the huge boulder resembles a giant eagle. With an altitude of 2018 meters above sea level, this mountain is a great attraction for climbers and tourists alike.

A Memory Photo with One of the Oldest Living Organisms in the World!

Abarkooh’s Cypress Tree is believed to be among the top ten oldest living organisms in the world. It is said to be over 4000 years old (according to a Russian expert). A Japanese scientist has put the age of the tree as old as 8000 years.

The height of the tree is about 28 meters. When we were there, lots of tourists were trying to take photos, moving back far enough to get the entire tree in the photo.

When to go to Yazd

Because the city is located in a desert and Iran is a four-season country, the best time to visit is Spring and Autumn because in Summer and Winter it gets too hot and too cold.

There are lots of handicraft shops where you can decide what to buy; tile, clay and cloth in different shapes that you can use on a table or as a bag.

What to eat in Yazd

Yazd is famous all over Iran for its sweets and candies, and as a tradition, whoever goes to Yazd must bring those sweets to relatives as souvenirs. Don’t miss “Haji Badom”, “Qutab” and “Baklava”. 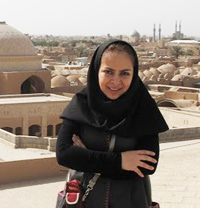 Marziyeh Ebrahimi is an Iranian young journalist with five years’ experience as a journalist in ISNA. She received her B.A & M.A in journalism and now works as a freelancer with many magazines and newspapers. She also is a researcher and has taken part in many international conferences. She enjoys writing about travel, music, and visual arts.