“English?! You’re a long way from Khaosan Road!” Cackled Hum-Hum. We struggled up the rocks closely watched by monkeys who had ceased swinging through the trees to observe these foreign creatures stumble through their forest.

I had, at different points in the climb, dispelled of my sunglasses, hat and t-shirt in the sweltering heat and could feel the sun piercing through the leaves onto my bare back. Moments later, however, and we had reached the summit.

I dipped my feet into the clear blue water, treading carefully through the dense moss carpeting the rocks underneath. The sun was gleaming off the water’s reflection and I could hear the soothing rush of the waterfall around me. The only disturbance was the sounds of birds calling excitedly within the flourishing forest. This was a calming end to the 3 kilometre trek up the Erawan National Park in Kanchanaburi.

Within the National Park there are seven waterfalls. Splash into the deep inviting water of one of them and you can be expected to feel the surge of tiny fish nibbling eagerly at your exposed skin. The uniquely ticklish sensation beats any of the knock-off ‘fish massages’ offered in any tourist hotspot within Thailand.

The onrush of the waterfall reached a crescendo as I floated under it. The sheer power of wave upon wave slapping against my body made it quite a struggle to stay above water. Having got out I felt completely refreshed after the climb and eager to pursue another adventure.

The journey on the tuk-tuk to the tiger temple was spent with great trepidation. I knew there was little danger of being attacked. But the thought of being within touching distance of one of nature’s most fearsome animals was daunting nonetheless. The warning beforehand to not wear orange, red or stripy clothing otherwise I may be set upon did not help either!

Before entering the sanctuary we were told to leave all bags, wallets and belongings on the side as a precaution. We were made to wait in a queue as Joe, a volunteer, took us by the hand to guide us round the tigers. The animals were lazily relaxing around the site with monks crouching nearby. Before we walked in, Joe showed me a wound from one of the beasts.

‘The youngster who did this was only three weeks old as well!’ Joe exclaimed as he showed me one of the deepest cuts I had ever seen. This instilled me with great confidence just before entering their den!

Kneeling next to the creatures and touching them was truly breath-taking. One tiger was swiping casually at a piece of meat being dangled by him. I was taken aback by the speed and grace of the animal, even in this resting state. Another rolled onto his back playfully bearing all four razor sharp paws in my direction. ‘When they are in the mood to play this happens!’ laughed Joe, pointing again to his cuts.

Playing with the Cubs

The Temple offered us a chance to visit the den where the cubs are kept. The youngsters had infinitely more energy than their parents! They were only too eager to leap upon whichever unsuspecting human being was closest.

We were given a chance to see these cubs in action when set loose together. In groups they were only too happy to play fight and use us as climbing frames for their mischief. I understood the danger these creatures possessed as they happily dug their sharp claws into us and climbed up our backs and shoulders. It was quite a struggle to get rid of them as we left.

At the elephant sanctuary we witnessed these great beasts plod ungainly through the mud- truly a sight to behold. It was a sight I was soon to experience as I was quickly hoisted upon one of them. I was at the creature’s mercy, clinging on to the rails for dear life as the elephant descended into the lake, soaking me in grimy water in the process.

As I was hanging on, John my guide was completely at ease as he slouched on the elephant next to me. He asked in broken English if I recognised any of his favourite Thai songs. Upon receiving a series of negative answers he promptly broke out into a rendition of ‘Jingle Bells’ at the top of his voice – much to the amusement and confusion of his fellow workers around me.

The next activity was water rafting down the long, winding River Kwai helped by Jao who steered us through the water. Our group of fifteen people were hunched together on the bamboo raft as Jao expertly manoeuvred us along the current. Under the watch of the smouldering sun, we sat tentatively amongst the logs tied together. Each of us was hoping not to place too much pressure on a single one for fear of breaking it.

Meanwhile, Jao frantically hopped around pestering us with question after question about the intricacies of London life. It was difficult explaining how the London Underground works whilst trying to hang on to the edge of the creaking raft!

Luckily I managed to stay fairly dry and the next port of call was the Death Railway built by the Allied prisoners of World War II. This train journey is famous first for the history and second for the feeling of sheer helplessness as you are dragged across the rickety railway at the mercy of the driver.

Outside we could see luscious green fields beyond the River Kwai. They stretched out to be disturbed only by the magnificent imposing presence of the Bridge itself. Dotted about the fields, workers could be found trying to extract the last bits of crop as sunset closed in.

Inside the train, school children hopped on and off chatting animatedly amongst each other to the great irritant of the elderly around them.

The Bridge over River Kwai signalled the end of the trek. As the last rays of light came from the setting sun the bustling market beneath us was starting to slow down. The customers were beginning to file out whilst the stallholders hung around still hoping for that last bargain.

As I stared out at the multitudes of people hopping on to their mopeds to go home, sometimes three to a bike, I thought of what Thailand had come to be associated with – buckets of vodka, glow paint and hours of partying which can all certainly be found here.

However, only a couple of hours from Bangkok, Kanchanaburi is easily accessible by coach and yet is still a relative unknown to the multitudes of tourists who visit Thailand. For those interested in taking their journey that extra step further they will see a country filled with a history and backdrop waiting to be explored.

Street vendors selling noodle soup with chicken for as little as 20 Baht all over the town.

Jungle and elephant trekking and the Tiger Temple trip can all be booked at Blue Star Guesthouse the night before. The Tiger Temple costs 500 Baht for entry. A Day out trekking costs 1,070 Baht (including elephant riding, Erawan Waterfall trek, water rafting, journey on Death Railway and visit to Bridge over the River Kwai). 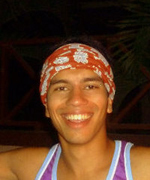 Joseph Lobo is studying history at the University of Nottingham, United Kingdom. He has traveled extensively throughout Europe, U.S.A. and Asia. Currently a sports editor for his student magazine, he is always interested in discussing the latest sporting issues – particularly regarding his football team, Newcastle United.