Manarola: A Glimpse of Old Italy in Cinque Terre

We thought the view out our window in Venice of the curving canal and little arched bridges couldn’t be beaten–until we saw Manarola.

We arrived in the Italian Riviera three days later. The little village of Manarola in Cinque Terre was our second stop in a late-September trip through Northern Italy, one that would later take us through Siena, Florence and Rome.

We exited the train and were greeted with another steep climb, having to haul our bags from the station at sea level up to Hotel La Teretta at the top of town.

Our host, Francesco, served us some Prosecco (a local sparkling wine) and led us to the private terrace of our room. Looking down through the tiny village, where pastel-colored houses piggyback up hillsides covered by vineyards framed by the Mediterranean, I turned to Todd and admit, “It looks like I was wrong about that view in Venice.”

Getting what we hoped for

By extolling Vernazza’s charm in his books and television shows, travel guru Rick Steves has been credited with turning Cinque Terre into a must-see destination, and for diminishing its old-world qualities by pointing so many people in its direction.

We chose Manarola to avoid the crowds in Vernazza, its better known, and some say more picturesque, sister town to the north.

We want some of the old — a glimpse of a time when people seldom left these once-remote seaside villages — and we found it in Manarola.

As we stood on our veranda, I wondered again if we even need to leave the room. Terraces lined with grapevines, supported by ancient, stacked-stone walls define a curving hillside directly across from us, where burly men carry wicker baskets filled with the just-picked grapes that will be used to make the area’s namesake white wines.

An old man and his young helper were repairing one of the walls, the echo of their hammering and shoveling the only thing that broke a calming silence. The ocean at the bottom of town is far enough away not to be heard, but close enough to fill the air with a salty aroma.

This region is also known for its fresh seafood, and Manarola is at least partly known for Trattoria dal Billy, a longtime purveyor of local dishes made only with local ingredients. Francesco secured us a table for dinner and we headed out along a narrow path, past modest stucco houses that break up the view of the ocean, to a multi-level restaurant hanging on a cliff on one side of town.

Photos of the current owner carrying goat-sized fish through the harbor while wearing nothing but a bikini swimsuit (standard attire for local fisherman) cover the walls inside the restaurant’s modest dining room.

We started with a 12-course seafood antipasto,  which includes squash blossoms stuffed with white fish and slices of raw tuna bathed in balsamic. The owner asked us how we’re doing, and then launched into a tirade about tourists who don’t appreciate his food.

I appreciated his passion, but he couldn’t understand. He’s got this view every day. Where we come from, there is no comparison, and we intend to soak it up every chance we get.“They come here just for the view,” he said, as he delivered a platter of red pasta topped with a whole lobster. “We start early every morning with fish we just caught and spend all day in the kitchen. We only serve 70 people a night.”

A perfect day in Cinque Terre

We started the next day on Manarola’s “Vineyard Walk,” a dirt path that cuts along the hillside above town. Workers filled baskets with grapes while we enjoyed views of the town and the Mediterranean coast. The path led around to face the sea and down through a centuries-old mausoleum before dumping us out on the main walk, which snakes along the coast, connecting all the towns in Cinque Terre.

We circled back to Manarola’s harbor, with its diverse audience of colorful buildings, each with an unobstructed view of the fishing boats that come and go each day.

In the fall, the basketball-court-sized main square, a short walk up from the harbor, is pleasantly devoid of crowds. Little artisan shops share the street with cafes that display a variety of focaccia and pizza in a colorful array behind glass.

“What’s your favorite?” I asked the guy behind the counter at one of the food shops. He pointed to a pile of Focaccia con Pesto, the local specialty.

At the other end of a tunnel that leads to the train station, we picked up the “Lover’s Walk,” a picturesque section of the main path that clings to the granite cliffs between Manarola and the town of Riomaggiore to the south.

Couples, hoping to seal their love for eternity, have attached thousands of colorful padlocks to the railings along the way.

From Riomaggiore, we caught the train to Corniglia, just north of Manarola. Situated on top of a hill that juts into the sea, Corniglia offers long views of the Italian Riviera with an unspoiled, medieval-village backdrop.

We found it hard to leave, but Vernazza called to us from the other end of a three-mile stretch of coastal path.

It’s a challenging hike with memorable vistas, and at the end, we were rewarded with an almost aerial view of Vernazza’s peach and yellow buildings as they cling to a rocky, hook-shaped outcropping that seems to point at the larger village of Monterosso, visible to the north.

True to what we read about it, Vernazza was packed with pushy tourists. But we loved it anyway.

A color palate of tall stucco houses lines a narrow main street that spills out into a bustling harbor. We grabbed a table under a group of umbrellas that fight for space on the concrete pier.

One large pesto pizza and two cold beers later, we joined about a hundred people on the harbor’s tiny beach for a swim. The water was clear and warm, but the crowds were a bit much.

“Let’s hop the ferry back to Manarola,” I said. Todd agreed.

Manarola’s harbor has no beach, but it does have really wonderful deep-water swimming. We jumped in from its big rocks and climbed out on metal ladders that extend into the water.

Little sailboats go in and out as sexy sunbathers jockey for a spot to lay their towels. We enjoyed the most beautiful swimming pool in the world.

Sunsets and savory food with a view

It’s late afternoon and a sunset, best watched from our veranda, is in store. At a little shop just off the harbor, we bought some cured meats, a lump of local cheese and a bottle of Chianti for a ridiculously low price.

Despite the steepness, it’s a pleasant walk back to our hotel. The river that carved this little canyon has been covered by a concrete roadway that winds through the center of town. We can’t see it, but it makes a relaxing sound and it cools the air.

As we climbed, an old woman wearing a yellow apron appeared in a second-story window and yelled in Italian at a worker on the street.

A man swept the front stoop of his shop a few doors down as a little truck filled with baskets of grapes drives by. There wasn’t another tourist in sight. I felt like I’ve stepped into an old Italian movie.

Back on our veranda, the sun sets over the clusters of houses that hug the canyon walls. Todd poured me a second glass of wine as I snack on a piece of focaccia topped with prosciutto.

“I know I’ve said many times that southern Spain can’t be topped as the perfect place to retire,” I tell Todd. “But I think I was wrong about that too.” 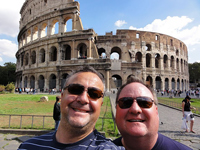 John Caldwell is a writer, editor and content designer based in San Diego. He toured Italy with his husband Todd

Love Italy? Get our Italy Plane Reader with dozens of features about Italy–to go on your Kindle, Nook or iPad. Only $2.99!