Why Women’s Travel Is Unique

Most women live a busy lifestyle with many duties and obligations. In this day and age, the majority of women are mothers, wives, and have full-time careers. Due to this lifestyle, a woman may feel as though she does not have time to work on herself as an individual due to being too tied down with perfecting herself as a mother and a professional.

Traveling is looked at as an opportunity for a woman to lose herself in another culture and to find one’s self again as a grounded, wiser, and more worldly individual. Many women like to travel in the company of other women to experience this rebirth.

Yolanta Barnes, of Sights and Soul Travels, a company offering European tours for women says that men and women travel differently. Men tend to be goal-orientated and want to see as many sights as possible on vacation. They look at the vacation as a race to see the most, rather than a time to immerse themselves in the culture. When women travel together they have the opportunity to see and do exactly what they want.

Although some women look at vacation as a time to relax, doesn’t mean that all women’s travel consist of spas and lounging. While some women travelers choose to have a luxurious London vacation as a girlfriend getaway, tasting the finest food and heading to the spas, others ski Utah, go biking in Vietnam, or go kayaking down raging rapids in Yukon Territory as their women-only getaway. Here are some stories of GoNOMAD.com women who enjoyed adventure get-aways. 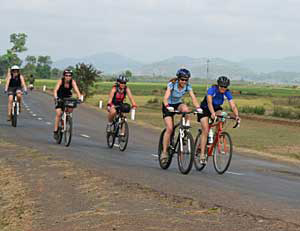 Originally I was going to name this entry “Pedal Power” since it is about my fourteen-day cycling tour of Vietnam. But when I joined the group and saw that all ten of my co-riders were women, I thought it was appropriate to change the name.

We were told that it is the first time in the history of Intrepid Travel that a bike tour group has been all women — and it had to be my group!

At first, I was a bit disappointed because I’ve never been one for girly gossip or constantly talking about how to find a husband. Too much estrogen can get a bit much and it’s nice to have a mix with some maleness thrown in.

But it turned out to be a really interesting and fun group of gals; plus some of these chicks were tough cyclists who would still beat the bicycle shorts off most men. Not only was it all women, eight of the girls were from Australia, two from England, and then there was me, the unsurprisingly only American.

It was a tad bland of a group as far as ‘internationalism’ goes. We were nearly all thirty-something English speakers who looked as white as Wonder Bread.

We did have some diverse occupations, though, from a fashion designer to a radiologist, to an architect, to some gals who worked in mining. Mostly it was good fun and I even scored my own room without having to pay a single supplement. 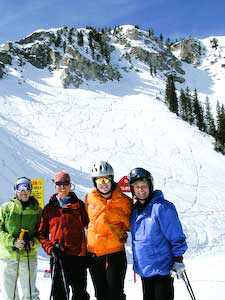 When people say they are going out west to ski Utah, easterners think, “Oooooh, aaahh isn’t that for

All true, but Utah is also host to oodles of intermediate and beginner runs which allow the novice or more accomplished skier to feel the rush of breezing downhill. I’m a strong skier and I can manage most of what a resort has to offer, but I wanted a ski vacation which was relaxing –- perhaps that’s an oxymoron.

But on a four-day, women-only ski getaway, I soaked up the peace and grandeur of Utah’s forest and mountain while listening to the background music of my skis swishing downhill. It was relaxing and my female companions made it doubly so. With the exception of an occasional male guide or van driver, it was just us gals and we skied mostly solid blue squares (intermediate runs), but as our delightful Park City hostess Picabo Street pointed out, “There’s no shame in that!”

We women were of differing ages and ski abilities, but we shared the common denominator of loving the sport and being crunched for time. In just four days, including travel, we covered three resorts –- Alta, Solitude and Park City Mountain Resort. We had the benefit of a Ski Utah guide, but anyone can use the tools of this detailed website to custom design a Utah ski trip to accommodate every desire.

Take Delta’s early morning non-stop to Salt Lake City from JFK and you can exchange your airline seat for a chairlift and be down the mountain by 1 p.m. — and that is having rented your skies and eaten lunch first! So east coast skiers on a tight schedule can ski both on their arrival and departure day.

Yukon Women’s Expeditions: Enjoying the Beauty of the Wilderness
> 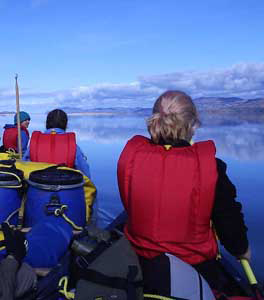 Women can now find other adventurous women to travel anywhere from Costa Rica to China and from the Yukon to the Bahamas. Tour groups have sprung up around the globe to provide a venue for women to come together to travel. Yukon Women’s Expeditions is one such company that takes women deep into the heart of the Yukon.

Yukon Women’s Expeditions is based in Whitehorse, Yukon Territory. The women-only travel business provides wilderness adventure tours and outdoor education to women interested in exploring the natural beauty of the Yukon.

Novices can learn to paddle a canoe, and experts can kayak down raging rapids on a number of tour options that include hiking, snowshoeing, skiing and biking, all solely in the company of women.

All these adventurous activities can be undertaken in a relaxed atmosphere, in complete safety, with the guidance of staff members who are fully trained in all aspects of wilderness travel.

Tami Hamilton, a guide for Yukon Women’s Expeditions, has discovered a few reasons why women have embraced this optional segregation in vacationing and in outdoor activities.

In her two years as a guide exclusively for groups of women she has found, “Women-only travel lets a woman be more herself. It breaks down gender barriers, and makes it so that there are the same expectations for the whole group, instead of women and men having separate expectations. It really builds self esteem, even in confident women.”

While many women enjoy tours and girlfriend-getaways, there are women who view solo travel as the most personally invigorating experience. Whether it is fishing or bird-watching, women are able to find tranquility and inner-peace through traveling alone.

Birdwatching in West Marin: One Woman’s Journey to the Edge of the Lagoon

My first trip to the Bolinas Lagoon was just a day trip took to find some peace and quiet away from home. Bolinas Lagoon is in West Marin, an area along the coast just a few miles north of San Francisco, on the other side of the Golden Gate Bridge.
align=”right”> 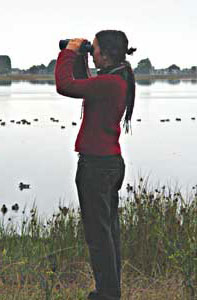 Its miles and miles of protected parks and waterways makes it an ideal spot for a short getaway from the hustle of the city.

Once I reached the lagoon, I pulled over where a few other cars had already parked, and walked along the meandering edge of the lagoon until I was next to a few local birders with their spotting scopes and binoculars all pointed at a duck.

Turns out, this pullout off of Highway One is a prime viewing spot. As it also turns out, this wasn’t just any duck, this was a Red Breasted Merganser.

“What’s the big deal,” I asked? The woman to my right didn’t say a word, and just handed me her binoculars.

This was the most punk-rock, absurdly hip duck I’d ever seen, with a gorgeous deep green Mohawk atop a slender neck. He could dive out of sight for over a minute at a time, and while we waited for him to pop back up, we chatted.

West Marin is the most liberal corner of one of the most liberal counties in all of California, a land of mostly hippies and farmers, so they say – so I wasn’t surprised to find welcoming and laid-back locals to help me with my first birding experience.

Unfortunately, just as I starting to really get into birdwatching, the looming clouds overhead started to dump rain on us poor birders. The locals were prepared with umbrellas, rain gear, and waterproof binoculars – but I was not. But, I vowed to come back on a sunnier day, binoculars in hand.

Other women still like to be surrounded by their family when traveling, so there are a number of mother-daughter tours in the market. Kathryn Abbott and Kate Hartshorne write about a three-generation get-away to Wellflleet, Massachusetts.

Busy working mothers don’t often get the chance to find relaxation close to home. So when the opportunity struck for this mother, daughter, and three-month-old granddaughter to take a three-day vacation in early April, our options were limited.

Where could two moms go to getaway and relax in the early spring in New England?

We decided to head to the Outer Cape, the last leg of the journey out on the forearm of the Massachusetts peninsula that is Cape Cod. There was some concern about the possibility of cold weather.

New England can be notoriously chilly at any given time of year and April is no exception.

It has been known to snow on many an April day in this region, but was that enough to tamper our adventurous spirits? Definitely not.

Our trip began inauspiciously. We drove through rain and high winds, arriving just in time for the skies to open up with a crashing downpour. One saving grace was that baby Sofie slept the entire way from Boston, not her usual form.

Two of the oldest and best-known resources for women-only travel are Journeywoman.com and WomensTravelClub.com.

TransitionsAbroad.com has a listing of women-only tours.

SmarterTravel.com has an interesting article by Molly Feltner about women-only travel, along with touristings.

Lisa Linsley is an intern at GoNOMAD and a journalism major at UMass Amherst. );

www.gonomad.com
This article was last updated Dec 7, 2018 @ 4:55 pm
If we've inspired you to travel with this story, why not check out the prices to get there and make it happen. Search airfares, hotels, and rental cars here. Thanks!