Volunteer to Save Buffalo in Yellowstone National Park 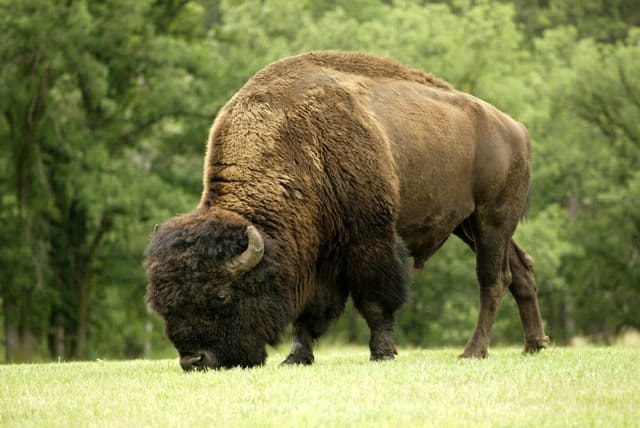 Winter is usually a quiet time in Yellowstone National Park. The crowds of summer are gone, leaving only the intermittent buzz of snowmobiles. Thick blankets of snow have a muting effect on the vast landscape. The world’s first national park seems at rest, replenishing its soul for the busier times when warm weather returns.

But for the past few winters, the lands just north and west of Yellowstone have been the site of an ongoing struggle to save the estimated 2,000 wild buffalo still alive in the Greater Yellowstone ecosystem. In harsh winters, bison often leave the park to forage for food near the towns of Gardiner and West Yellowstone, Montana.

Beginning in the mid-1990s, the Montana Department of Livestock adopted a policy (upheld by the federal government) through which any bison leaving the park’s boundaries could be killed if they test positive for brucellosis — a contagious disease.

Cattle rule the range in Montana, and the state’s ranchers fear the disease could be transmitted to their herds, causing cows to abort their calves. Never mind the fact that not a single case of bison-to-cattle brucellosis transmission has ever been recorded.

Never mind the protests from Native Americans, who hold the bison sacred and who have marched to Yellowstone to plead and pray for their lives. Montana’s policy lives on, and 94 bison were slaughtered during the winter of 1998-99.

But that’s nothing compared to the winter of 1996-97, when officials killed more than 1,000 bison. The following winter, a group then called Buffalo Nations began assembling near West Yellowstone, intent on stopping the carnage. The activists — now known as the Buffalo Field Campaign–are the only group working full-time on the Yellowstone bison issue.

From December through May, BFC volunteers are in the field near Yellowstone, monitoring and documenting the Department of Livestock’s activities. In the campaign of 1998-99, campaigners seven spent seven weeks camped in a 30-foot-high tripod they erected on a Forest Service Road in an effort to block construction of a bison capture facility.

The blockade finally went down right in front of the cameras of television newsman Bill Kurtis, who had interviewed the activists just hours earlier. (The incident later aired in an episode of Kurtis’ “Investigative Reports” on the A&E Network.)

Several hundred people have volunteered with the BFC over the past four winters, and anyone looking for an alternative way to see Yellowstone and help save the last free bison is welcome to help. Volunteers have come from as far away as Ireland and Israel, and from as close as Bozeman, Montana.

Although many are in their 20s, volunteers have ranged in age from high-school through retirement. Volunteers are welcome to join the effort for a weekend or an entire season, or any time in between.

Volunteers are housed in a log cabin several miles from West Yellowstone. The cabin has a hostel-style atmosphere, with bunk beds (although some volunteers pitch teepees outside) and mostly vegetarian meals. After training, BFC volunteers typically work one patrol shift a day, either from sunrise to noon or noon until sundown, five to six days a week.

Sometimes they patrol from vehicles, sometimes on cross-country skis or snowshoes, often with video cameras to capture DOL activities. People who cannot patrol are assigned other tasks ranging from cooking, chopping wood, working in the office, monitoring the media and answering emails.

In their free time, volunteers can enjoy more Nordic skiing or snowshoeing in the Gallatin National Forest, or they can just kick back with a book or video and enjoy the peacefulness of a Yellowstone that few visitors ever see. It’s all in a day’s work to save the last of the American buffalo from extinction.

The BFC recommends that prospective volunteers contact the campaign several weeks before coming, and coordinators can advise on times when the help would be most useful.

With advance notice, volunteers can be picked up at the airport in Bozeman, which is served by several major national and regional airlines.

The winters in Yellowstone can be severe. Visitors are asked to bring warm woolen, polypropylene or fleece clothing, including long underwear; a sleeping bag; wool socks and snow boots. All clothing must be rated to 20 below zero. BFC coordinators do have a limited supply of extra winter clothing available for volunteers who might not have the proper gear.