Shringi Vatika is a small cottage surrounded by mighty mountains in the village of Ghiagi in Himachal Pradesh. My husband Sesha and I visited it in the cold month of February.

The place is run by Mr. Manohar Lal and his family and it is really an extension of their beautiful home. I hesitate to call Shringi Vatika a home stay because the three to four rooms that they rent are in a separate wing and there is an in-house restaurant which is not present in an average Indian home stay.

I have been to Shringi Vatika twice, though not by design. It was not easy to reach there by using the public transport from New Delhi. ISBT (near Kashmere Gate) is the central bus station at New Delhi and we wanted to take a bus towards Manali. But by the time we reached ISBT, the last bus for Manali had left.

In fact, outside ISBT we met at least four touts trying to tell us that at this hour (it was 9:30 at night, not all that late) no buses apart from their own were available (you have to ignore such advices).

Once we managed to enter the bus station, we found that the best course was to take a bus to Chandigarh, a 2X2 ‘deluxe’ bus, the only decent bus we took in this entire journey.

We reached Chandigarh at 4:00 in the morning. I was frozen for the part of the journey; it got quite cold at the night and the bus windows would not close all the way, leaving a narrow gap for the chilly wind to come in through.

From Chandigarh we took a local bus to Manali, only we had to get down at that tunnel to take a bus for Banjar in the opposite direction which might go as far as Jibhi.

Are We There Now?

If you are not sure where to get down, the trick is to tell the conductor of the bus your intended destination and ask them for the approximate time the bus is expected there and you would be safe. The conductor would make sure to tell you when to get down and just in case he is sleeping you should wake him up around your expected arrival time and ask the famous question, “Are we there now?” 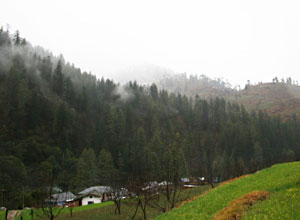 We did all this and finally reached Jibhi around 2:30 pm. I was so sleepy throughout the journey because of Avomine, the anti-nausea medicine for my motion sickness. Still we walked the last two kilometers from Jibhi to Shringi, rather than wait for a bus that was available an hour later.

It started raining lightly by this time. Finally, when we saw the sign board of Shringi Vatika, it was such a relief. It took us 17 hours to reach the place. How we attacked the aloo parathas (Indian flat bread stuffed with potatoes) that were served to us a while later.

Shringi Vatika rents out four rooms and all of them have windows that open towards a small stream and a garden. In the summer months (the tourist season) they also let guests pitch tents in the garden or stay in the hall adjacent to the restaurant if there is a crowd.

The first time around we were there in February and it was really cold then; there was no one staying apart from us at the place. 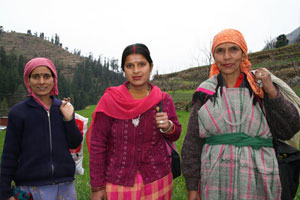 The entire structure is made of wood and constructed by the owners themselves with the help of local people. The wooden floors helped to keep a little of the cold out!

The rooms and the facilities are modest but so are the room rents. Rooms usually go for less than 500 rupees (roughly 11 dollars) and though the food cost is extra, it would add around the same amount to your bill for all the three meals of the day.

After that 17-hour journey, the next day I got up late, around 10 am, I guess. Sesha was out before me.

When I surfaced it was grey with a fine drizzle in the air. Sesha told me we were taking a small hike. The youngest son of the owners, Raju, was coming along with us as our guide. 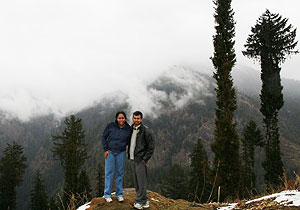 After I had gobbled my bread and omelet with tea, a short while later we started walking along a stream. After a very short distance, as it often happens with the mountain paths, the way started creeping uphill. And it refused to take any other shape till we reached our destination, Sojha.

I am usually quite comfortable walking even if it is uphill. But on this day I was not. Initially, when we started walking, I opened my thick jacket and only later I realized that in spite of the climb I was shivering. Once I zipped it up again, it was a bit better. We had lunch at Sojha and then started walking toward Jalori Pass.

A Little Snow and Lots of Rain

There was a little snow even on the last stretch to Sojha. As we were walking on the motorable road to Jalori, I saw light snowfall and it was the first I had ever seen. 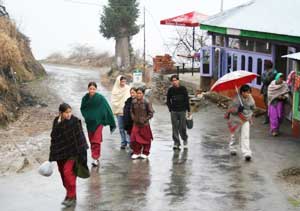 The canteen at Sojha and people walking home in rain

Sesha once again acted superior and said this was nothing, they had to abandon a trek in Manali (student days, I was not into trekking then) because of excessive snow that came down at night.

After walking ahead for a while we found the snow on the road too much and we decided to turn back. Finally, the road started going downhill!

When we were quite near the Vatika (and we had walked in all for about five hours), Sesha in a big singsong voice told me, “If walking all day in the rain is your idea of holiday, please start taking them alone.”

I laughed my head off; he had dragged me all the day in rain (it was raining moderately all the day through this walk) without even asking me if this was what I wanted to do!

Anyway, we were soon sitting back in front of a fire and I was drying my wet jacket, sipping tea. This was also the day of local Himachali cuisine of Kungis soup (nettle soup), Sweet Rajma (kidney beans) and Sidu (a Himachali dish). 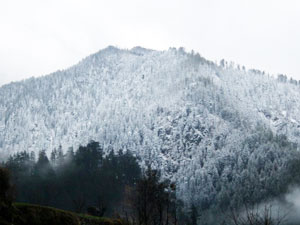 The next day, thankfully, it was raining hard from the word go and Sesha could not drag me anywhere. For the whole day, we were sitting in front of fire and reading and chatting and eating (I wish I would do this more on my vacations).

In the afternoon, three other guests came and one of them started chatting with us. In the meanwhile, many of the surrounding regions that were green before were turning white.

For a while, a strong wind was blowing, making the rain and snow run lightly along with it before falling on the ground.

At this point the guest remarked “aap ke liye tou plasma TV laga hua hai samne hi.” (It is like a flat-screen plasma TV for you and the images keep changing constantly). 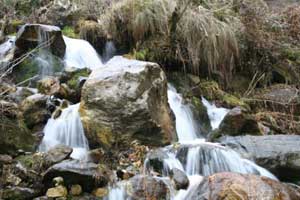 A waterfall behind the cottage

I was watching the changing scene with my mouth open and how I agreed with him. That is how the third day passed. After a nice dinner it was time to turn in and look ahead to get up at 5:30 in the morning to start the journey back to the world of 21-inch flat TV, which I rarely watch.

However, I visited the place again within a month and that in itself is an interesting story. While we were coming back, we took a taxi from Shringi Vatika (the owners will book it for you if you ask them) up to the tunnel.

Soon after we were heading towards New Delhi in a bus and when we were nearing the next town, I realized that I had left my cell phone in the taxi!

I fretted for a while and then reasoned that it is better to leave the cell phone behind, rather than my camera. I decided to worry about it only after I reached back. 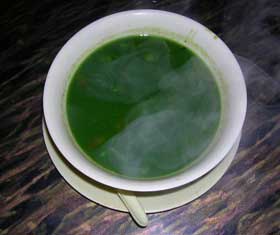 I called the owners after reaching home and they told me that yes, I had left the phone in the cab and the owner of the cab had returned it.

The second time around I went with my younger nephew to get my cell phone a month later. Since then I have been quite tempted to leave my cell phone every time I venture deep into the hills, so that I can visit a place quickly again!

We managed to do the journey in a little more comfort by taking a Volvo bus up to the tunnel, followed by a local bus to Banjar and then hiring a taxi up to Shringi Vatika.

It was also a little less cold in March, but only just a little. We again walked up to Sojha but this time by the motorable road and not the steep uphill mountain path.

I again tasted Sidhu and Sweet Rajma along with Nettle Soup. And very soon it was time to head back, the same taxi driver came and I thanked him quite profusely for returning my cell phone.

Watch a video of Shringi Vatika on a rainy day.

traveltalesfromindia.in/
This article was last updated Nov 16, 2018 @ 6:00 pm
If we've inspired you to travel with this story, why not check out the prices to get there and make it happen. Search airfares, hotels, and rental cars here. Thanks!