Hotels Up & Down the Chilean Beanpole, Page 2

Checking into Hotels Up and Down the Chilean Beanpole – Page Two

I am not sure I am able to explain how our visit to Chile turned into such a crazy high luxe extravaganza. After the Lakes Region, there was more luxe to come in central Chile. But let me first say something about the quite amazing tour that was organized for press visitors to TravelMart by some extraordinary people — and that these same fine people will, I am confident, gladly reassemble at a reasonable price for independent travelers.

Early one morning a group of about a dozen of us checked out of the Cumbres Patagónicas and headed down the PanAmerican Highway from lakeside Puerto Varas to seaside Puerto Montt and then down through an ever less populous countryside to a ferry crossing over a river and then on to the frontier village of Hornopirén.

I could show you on the map where these places are. Since we’ve been home — in Brazil, where we live — we have even managed to trace our journey on Google Earth. The greater truth, though, is that we were not on the map but off the map.

One day we rode a 39-foot Bayliner through channels and fjords that could almost as easily have been Scandinavia or New Zealand. Gorgeous. Unspeakably gorgeous. The kind of landscape out of which sadists make dispiriting 1,000-piece jigsaw puzzles.

In a place called Maullín, school children did some folkloric dances for us wearing the brilliant colors of the region and using kerchiefs as flags.

A Curanto on Chiloé

On mystical, mythic Chiloé Island, we ate a lunch called a curanto, which is something like a New England clam bake but this one with mussels as big as a sumo wrestler’s thumb, and this one is cooked in a hole in the ground.

They’ll put you up for $30-40 a night, they’ll feed you all the food you can eat, and Hardy Dimter, of French-German descent and with a richly lined face and piercing blue eyes, will even let you work the back 40 with him.

Along the way, we passed the quaintest little houses, not rich by any means but nothing like poor either, sometimes with wood shingle siding, sometimes with colorfully painted aluminum siding and with the daintiest lace curtains in the windows and often a porcelain cat or an heirloom pitcher or some other decorative bric-a-brac on display on the window sills.

We passed Catholic churches as plain and unadorned as Calvinist churches. We passed endless fields of yellow gorse. We bathed in thermal springs.

The Hosteria Catalina, where we spent a night in Hornopirén, was unpretentious but clean, comfortable, well-heated. Felt completely right to sleep and breakfast in the luxurious Cumbres Patagónicas one night, sleep — and, before that, dine — in the frontier-town Hosteria Catalina the next.

Chile, as we discovered, lends itself readily to a seamless casual-luxury tourism. It can also be organized on a $100-a-day basis, or for even less.

I wish I had more space to devote to this extraordinary press trip experience. Let’s just say that the people to get in touch with are Alsur Expediciones at alsurexpediciones@gmail.com.

Lacking iconic tourist attractions on the order of Sugarloaf, Corcovado, the Colón Opera House, or the Obelisk where Nueve de Julio crosses Corrientes, lacking even a signature soundtrack like Brazilian samba or Argentine tango, Santiago, the Chilean capital, has lagged behind Rio and Buenos Aires as a South American tourist magnet.

(How is it, by the way, that this word “iconic” has come so to haunt us in recent years? What was wrong with the good old-fashioned “world-famous”? Was it just that it was time for a change?)

With or without iconic tourist attractions, Santiago, in any event, would surely begin to get more of the visitors it so richly merits if people stopped defining it so narrowly.

Just over an hour in one direction is the Isla Negra retreat of Chile’s Nobel Prize winning culture-hero poet Pablo Neruda. This is an eccentric house in a glorious location overlooking the sea and, despite its name, it is not an island at all but a piece of the continent, a part of the main. (But that’s some other poet, not Neruda.)

A stretch up the coast from Isla Negra but also a mere hour from downtown Santiago along another spoke of the wheel (out from the downtown hub) is glorious, picturesque Valparaíso. Valpo is Chile’s leading seaport. There is a waterfront here of docks and warehouses. There is a lower city of stolid old bank buildings, a stock exchange, commercial offices.

Beyond that it’s up by motor vehicle or by foot or on one of the funky old hillside elevators, a rickety cabin on a steeply inclined track, into the residential neighborhoods, of which at least two, the Cerro Alegre and the Cerro Concepción, have in recent years become quite charmingly artsy and touristy. (Touristy in the best way.)

In Valpo, we enjoyed two nights of quietly understated luxury and elegance at the Casa Higueras Boutique Hotel, with its fine dining room, cozy sitting rooms, to-die-for views, and two nights would, I suspect, be just the right interval for other foreign visitors.

For two days you can wander the streets, ride the elevators, and keep yourself under the spell that is cast by good-looking people, fine cafes and restaurants, lovely art galleries, and an art spirit that spills over into the streets. In Chile, walls have a purpose more noble than merely to protect interiors. They are canvases for murals.

They are blank slates on which to inscribe poetry. More than two days and, I fear, visitors might begin to discover a Valpo that is less artsy and less enchanting. But that was not our fate. We drove north. Valpo blends into the resort town of Viña del Mar, where there is a Sheraton as well as numerous other high-end hotels.

Valpo has a certain grittiness. Viña has developed as an antidote to grittiness. Viña then blends into Concón, which has both a luxury side and a funky side and where we had an amazing lunch of scallops and clams in great baths of garlic in a joint by the sea where there were pelicans on the roof, and from there we drove on the short distance to Zapallar, in whose environs there are four golf courses, of which one is a 27-holer.

At the 42-room Gran Hotel Zapallar Isla Seca, where everything is as symmetrical as a Georgian country house in Britain, we found a wall paneled with photos of Margaret Thatcher, who had come by many years ago to sign some treaty or other.

Jose Carril, the manager, in a sweater that looked like Scotland, told of an American couple that had arrived in Valpo on a cruise ship. Somehow they had found their way up to Zapallar. They liked it. On the spur of the moment, they decided to abandon the cruise ship with a large part of the cruise still to go, and for a week they holed up right there in the Isla Seca.

But let’s go back to the downtown Santiago hub of this wheel. Go east along yet another spoke and in less than an hour you are at the Valle Nevado ski resort, up in the mountains obviously. Travel two hours and you’re at the Portillo ski resort.

We were in the Santiago area during one of the last ski weekends of the South American season. A friend of ours was going off to Portillo. Not us. We instead drove an hour south to the Hacienda Los Lingues in the Colchagua wine valley.

Luxury again. Extraordinary luxury. We lodged in a suite that might have served King Edward (Edward VII, the one who lent his name to the Edwardian Era) or even his mother Queen Victoria as receiving chambers. Horses everywhere. A regal dining room. Regal salon. And there was always some member of the Claro Lyon family, the owners, stopping by our table to tell stories and chat. I’ve seen ice cream parlors that boast “established 1987.” Los Lingues’ claim? “Desde 1545.”

Roads in Chile, by the way, are on a level with European roads, North American roads. Driving is courteous, disciplined. No reason North American visitors can’t rent a car and get from place to place on their own, same as they’d do in Britain or in France.

Leave Santiago in any direction, moreover, and you’ll pass vineyards and wineries and you’ll see signs for winery tours. Los Lingues does not itself produce any wines, but Los Lingues buys something like five percent of Rothschild-Lafite’s Chilean output, and they serve it, under their own private label, kind of as if it were common table wine (which, needless to say, it isn’t).

Santiago itself. OK, there are no must-see great monuments. But it’s booming economically, it’s as civilized as Europe is. You know how they say about a fine wine that it has overtones, say, of blackberries or of peach? Sometimes in Santiago you drive across the narrow little Rio Mapocho and you get little memory backbites of Charles River crossings in Boston or Potomac crossings in Washington. Civilized.

We stayed for two nights at the brand new Santiago W hotel — the first W in South America.

The colors, the fabrics, the textures — all fabulous. You don’t like the disco-y get-up-and-dance sound track? That means you’re not hip enough to stay here.

You don’t like the way, in your bathroom shower, there’s only one faucet — so that you can regulate water pressure but not water temperature? Forget it. Go somewhere else.

Fortunately there’s a huge Ritz-Carlton right around the corner. As traditional (and again the first of its brand in South America) as the W is untraditional. We didn’t stay there. But we looked in. We did, in this manic moving of ours, manage to spend one night, nevertheless, in the downtown Plaza San Francisco Hotel. Another fine traditional property. Didn’t give us just one 4 a.m. wake up call for a 7 a.m. flight. Gave us two.

The Plaza San Francisco, on the eve of our departure, also, as it happens, sponsored an impressive tasting of Chilean wines. Fifty different vineyards, hundreds of labels, and hundreds and hundreds of beautiful people, many of them there not to get drunk but serious enough about wines actually to make use of the spit buckets. Get to know this remarkable country. 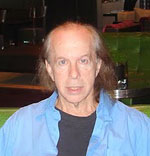 Mark Zussman was an associate editor at Esquire back when that meant something and editor-in-chief at Playboy Enterprises’ Oui Magazine back when that, too, meant something. For the past eight years, he has lived in Búzios, State of Rio de Janeiro, Brazil. The title of his next book: The Brazilians Are Better Than We Are.

www.gonomad.com
This article was last updated Jan 23, 2019 @ 10:19 am
If we've inspired you to travel with this story, why not check out the prices to get there and make it happen. Search airfares, hotels, and rental cars here. Thanks!