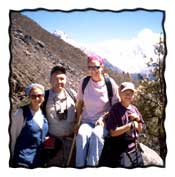 When Joan and Will Weber, founders of tour operator, Journeys International, took their children Noah, aged 10, and Robin, 16, on trekking in Nepal in 1998, they told their children — as they do all families who anticipate trekking in Nepal — to expect to find the Nepalese people “gentle, open, warm and friendly.” But no one had prepared Robin for their other strengths.

“The sherpas (who haul bags and equipment and set up tented camps) fly by us with these really heavy packs,” Robin noted in her trip diary, “and though they left WAY after us, they still arrived before us to set up camp!”

Even at the top of one of the steepest climbs, a sherpa’s wife came down the trail to meet the family, carrying cokes and Pringles. “You’re saving my life!” gushed Noah.

Overwhelmingly, the Webers recommend Nepal as a destination for families, particularly because of the potential for learning and discoveries.

“There is no better place for learning the lesson, that people all over the world, despite initial appearances, are really more like us than they are different,” says Will. 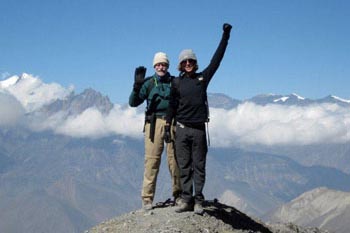 Besides, the mountain walks and challenges are great for personal growth and family bonding. When Will and Joan took Noah and Robin to Nepal, they were celebrating the twentieth anniversary of Journeys, a tour company they started in 1978 by posting notices around the University of Michigan and escorting their first group to Nepal.

At Namche, the family celebrated an anniversary party in decidedly sherpa style. “The party was called for 4:00,” remembers Robin. “But the first guest didn’t come until 6:00, because that’s just how things work here.

After dinner, all the sherpas starting giving out cahtas, long, white, silk ceremonial scarves and started doing their traditional dancing, a little like Israeli dancing except that they chanted their own music and were less animated.

They caught us off guard by asking if we had any songs or dances to do. We did “Home on the Range,” since it was the first thing that came to mind, and then the “Hokey Pokey,” my idea and actually a big hit, though we felt kind of stupid doing it!

So what made the biggest impression on Noah? “I think the motto of the Navy Seals applies well, ‘The only easy day was yesterday,’” wrote Noah in his journal, after hiking from Namche to Tengboche.

Though the walk, described by Joan as “one of the world’s most beautiful,” presents views of Mount Everest at every turn, Noah’s mother agrees that it is, indeed, a tough uphill climb. Had Noah been a bit younger, he might have “hitched a ride” up the mountain; children under 50 pounds are often carried by the sherpa guides in specially-designed porter baskets. Still, Noah made the walk on his own two feet and came out at the end stronger and more confident in himself.

Though Joan and Noah headed down the mountain after Tengboche, Robin trekked on with her father and their fellow travelers.

“Our group made it all the way to the highest point on Kalapathar, 18,800 feet, which Dad hadn’t been to before. We saw almost all of the southwest face of Everest, including base camp, the Khumbu ice fall and glacier and South Col (the spot for the highest camp on Everest). The sky was so amazingly deep blue, the snow and ice so crisply, refreshingly white, and hardly a cloud in the sky. Wow!”

Flying back, Will reflected on “a superb and exhilarating experience.” “We had a full moon, blooming rhododendrons, Passover, Easter, the Nepali New Year, Journeys’ 20th anniversary and a birthday, all observed with some specific ceremony and ritual,” wrote Will. And while Joan and Will feel sure that Robin and Noah will have equally profound memories, Robin’s journal reflects a true 16-year-old’s outlook, “we’re done. I’m clean…I ate real pizza. I feel totally satisfied with the whole experience.”

Journeys International operates a scheduled Annapurna Family Trek in Nepal, generally planned around Christmas or Easter holidays. Special prices apply for youths 12 – 15 and children under 12. Independent family treks can also be arranged throughout the year.