Swimming With Dolphins in Honduras

Swimming With Dolphins in Honduras

chest deep in the water. Surprise and shock surged through me, as I felt something hit my back propelling me at fast speed ten feet further in the water. I quickly straightened my snorkel and mask and looked up to see a huge grinning face coming straight at me.

The dolphin opened up her mouth just as she reached me and I gazed at her huge teeth. She gently took my arm in her mouth and with eyes that never left mine, began to chew softly on my arm.

If she had wanted to do damage, she was quite capable. I reached up with my other hand and stroked her and she gave off a shrill squeal of delight. I will never forget the feel of her; she felt as soft as wet velvet.

I was on the island of Roatan, off Honduras, participating in a Dolphin Encounter offered by the Marine Institute at Anthony Keys. There were three men, myself and another woman, and a precocious 12 year-old boy who would be sharing this experience. We were shown a video presentation and orientation of what to expect. Still, I was not prepared for the propelled ride through the water or the playful chewing on my arm.

I soon learned that the dolphins preferred to play in the shallow water. One dolphin swam over to me and then rolled over on her back presenting her soft tummy for me to scratch. As I scratched her stomach, I heard soft high-pitch squeals of what I assumed to be contentment just like a puppy.

Suddenly another dolphin appeared at my side and began the playful game of chewing on my arm. I began to feel myself relax and become as investigative as my playmates. I bravely reached into her mouth and felt her teeth. She clearly didn’t mind as she quit chewing on my arm and left her mouth open for me to feel her large tongue.

As if I didn’t have my hands full with tummy and tongues, another dolphin swam directly up to me and began bumping her nose against my chest to get my attention. Over and over, she continued to bump me. The muffled sounds of high-pitch squeals and shrieks continued around us. It was hard to tell which were dolphin sounds and which were coming from the delighted child nearby. He, too, was surrounded by playful dolphins. 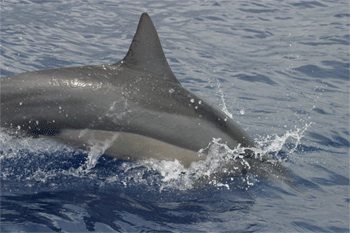 There was one special moment for me when one dolphin swam directly up to me and looked directly into my mask eye-to-eye. We stared at each other with total curiosity for a few seconds. In those few seconds, I knew I was being consciously appraised by this alien creature. I reached out and petted her.

I decided to try and communicate and moved my head back and forth in a sideways motion. She immediately moved her head back and forth in response imitating me perfectly. We continued to play this game and then she came eye-to-eye with me again. Again, we stared at each other intently. I knew that she was trying to communicate with me — if not in some intelligent way, perhaps in some intuitive way.

I’m sure that if we could truly communicate with dolphins, they could teach us lessons in compassion, understanding, and possibly world peace through their intellect, passion, and playfulness. Certainly the little boy in the group was learning and having fun at the same time. As far as he was concerned, swimming with the dolphins was better than meeting ET and it was an experience that would stay with him forever.

Anthony’s Key Resort’s Institute for Marine Sciences offer the opportunity for divers and snorkelers to interact with Dolphins on the initiative of the dolphin.

Dolphins are free to come and go as they wish in their own environment. There is no feeding to lure the mammals near the humans for interaction. Dolphins have natural curiosities and will come in close to humans.

All encounters are accompanied with a dolphin trainer and a videographer.

The Dolphin Encounter is an excellent way for small children and adults who don’t have strong swimming skills to experience relating to the dolphins by entering the water waste deep and petting the dolphins.

The Dolphin Snorkel Encounter consists of no more than six people at a time and the play session lasts for 30 minutes. Good for older children.

If you are a guest staying at Anthony Key’s Resort, the price is $65 otherwise, it is $75.

The Dolphin Dive Encounter consists of a small boat with no more than six divers being taken just five minutes outside the reef. The encounter is 45 minutes long and allows time to observe, photograph and play with the dolphins.