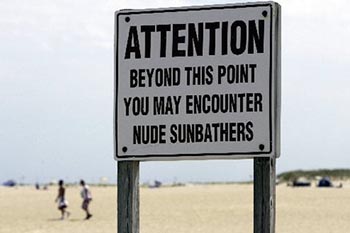 As I walked into the jail cell of this state park, I thought “Sandy Hook is different from other beaches I’ve visited.” Different indeed.

Sandy Hook isn’t just a great place to swim and surf, but it’s also home to a lighthouse that was seized by the British during the Revolutionary War and Fort Hancock, a key military base that defended the United States until the mid 1970’s.

Located less than one hour from Manhattan at the northern tip of the New Jersey shore, Sandy Hook is a popular destination for those seeking a weekend getaway from the city. In fact, this national park receives more than two million visitors each year.

Most people come to Sandy Hook for its outdoor appeal. Surfing, kite surfing, and windsurfing are popular activities during summer months, otherwise known as peak season. The park also features a five-mile-long pathway for walkers, cyclists, and runners.

Sandy Hook is also home to the largest nude beach in the entire northeast, Gunnison Beach, located at the northern end of the island near Fort Hancock. It is the only nude beach in New Jersey and receives more than 5,000 visitors a day during summer weekends. Friends of Gunnison Beach, an American Association for Nude Recreation (AANR) affiliated club, hosts social events such as dinner parties, cruises, and dances.

Most beaches don’t have a military base, which is perhaps the most interesting thing about Sandy Hook. Before the Ambrose Channel was built at the turn of the 20th century, ships could only gain access to New York City by passing through the waters off the coast of Sandy Hook – making this a very strategic location.

Fort Hancock was established during the war of 1812 and was the site of the country’s first US Army proving ground. It also served as harbor defenses for New York, Long Island, and New Jersey during World War II.

For more information, visit the Fort Hancock museum located inside the former Post Guard House. The museum features a jail cell exhibit, so you can see exactly what is was like to be a soldier under arrest.

Sandy Hook also features the oldest working lighthouse in the country. When it was built in 1764, it was only 500 feet from the water. Due to ocean currents, it’s now one and a half miles from the northern end of the park. Tours of the lighthouse are available from April through December.

Since Sandy Hook is closed between dusk and dawn, there are no lodging options available to the public; however, the neighboring town of Highlands, New Jersey is known for its quality B&Bs. This town lives up to its name – it’s the highest point on the Atlantic seaboard between Maine and Mexico.

Sandy Hook features only one restaurant, The Seagulls Nest, which serves basic American fare like hamburgers and hot dogs. It also closes at dusk along with the park. Visitors should head to the Highlands for dining options ranging from Mexican, Cuban, Jamaican, and Italian.

If you like seafood, be sure to dine at the world famous Bahrs Restaurant on the water. It’s so popular that it’s been mentioned on The Sopranos and the 2004 Kevin Smith film, Jersey Girl. Here’s another fact that seafood lovers find interesting about Highlands: there’s a clam purification plant located in town.

Visitors do not need a car to get to Sandy Hook, although it is the preferred method of transportation for most.

Ferry services run directly from Manhattan to Sandy Hook during the summer and Highlands in the off season. Water taxis are also available from the Highlands to Sandy Hook. Academy Bus Lines offers service from Port Authority in New York City to the Highlands.

Six miles of beautiful beaches are the main reason people visit Sandy Hook; however, it’s the park’s rich military history spanning more than two centuries that leaves the biggest impression on vacationers. Besides, I don’t know of any other beach where you can relax inside a jail cell without having been arrested.

For more information on lodging:

For more information on Highlands Restaurants: