On a rather untypical Seattle day, with driving rain instead of drizzle, five passengers waited in order of destination to load a refurbished 1966 seaplane operated by Kenmore Air. Our destination was Washington’s famous San Juan Islands.

The first passenger, a black lab named Roxy, enthusiastically took the first seat. Her owner followed with special dog earmuffs in hand, followed by two others, and finally myself.

Chuck, our pilot from Alaska, instructed us to buckle our seatbelts and placed a set of headphones in each of our hands. As we taxied out to the northern tip of Lake Union, Chuck explained excitedly how our plane drove similar to a sports car. The combination of a light engine and manual control allowed pure enjoyment piloting.

Surprisingly, takeoff was smoother than a much larger plane crossing the Atlantic. Chuck’s coffee cup, placed casually by his feet, demonstrated the ease of takeoff on these small planes. We glided out of Seattle, leaving the Olympic Peninsula behind. The rain ceased and morning light from between the clouds poured into our cab.

Along the way, Chuck pointed out sea lions resting on rocks. The grey figures shifted their heft as we roared by.

Our first stop was Lopez Island. Ready to brace myself for a hard landing on the water, I clenched my fists long after landing, not realizing that we had hit sea level minutes before. White mist and waves behind proved our landing had long passed.

Roxy and her owner cheerfully unloaded, two new passengers came aboard, and once again we took off. In less than five minutes we landed in Friday Harbor, my destination.

Chuck unloaded mine and one other passenger’s bags onto the dock and again took off for another destination. The plane went out of sight, the water glassed over, letting the reflections of a maze of colorful boats glisten through.

Before leaving Seattle, I worried the forecast of days of rain and heavy winds would also apply to the San Juan Islands, as the island is only 60 miles north of Seattle.

The tranquility of the harbor when I arrived, compared to the storm I had left just an hour before, is due to San Juan Island being part of a different weather pattern from the South, as the island is in a rain shadow of the Olympic Mountain Range. The result: the island receives roughly 50 percent of Seattle’s annual rainfall.

Ready for breakfast, I began searching for a café. I discovered the Doctor’s Office, in front of the Washington State Ferry terminal.

The name of the café is fitting as they care for their customer’s needs by offering the usual drinks and snacks, but just like a doctor, they have thought of what a customer may need in the future but will overlook.

The café is stocked with blankets and used books for a more comfortable and enjoyable ferry ride through the islands. I poked through the books until my breakfast was ready and sat outside of their porch. The morning air still had a chill, but my breakfast burrito and coffee warmed me up as I watched a ferry dock and unload passengers.

As the last few cars came off, I walked to San Juan Island Safaris to their 55-foot covered boat.

My main purpose in visiting San Juan Island was to go on a whale watch. It is the beginning of May, it was uncertain whether I would see the resident orcas. Every winter they migrate as far as Monterey, California, but it wasn’t long before the Captain spotted a familiar pod.

Dorsal fins as large as six feet protruded from the still waters. Our naturalists were thrilled to point out two new members of the returning pod. Two 300-pound pink and black babies dove in and out of the water. Orcas are black and pink shortly after birth, but soon after the pink turns to white.

The San Juan Islands are known for three resident groups of orcas, otherwise known as killer whales. The name killer whale is thought to come from an incorrect translation of the Spanish name: whale killer.

They were called this because orcas were observed to hunt other species of whales. The name evoked fear, and as a result orcas in the Northwest were almost killed to extinction.

A New Image of Orcas

It wasn’t until 1964 when the negative image of orcas changed. The Vancouver Aquarium commissioned the artist Samuel Burich to create a life-size sculpture of an orca. Burich was encouraged to go out into the local waters, harpoon and kill a whale to use as an accurate model for his sculpture.

After two months of waiting, he managed to harpoon but not kill a male. Unsure of how to finish him off, Burich contacted the aquarium. In haste, Vancouver Aquarium towed the orca by harpoon, roughly 16 hours back to Vancouver.

They named the whale Moby Doll. During Moby Doll’s two months of survival in captivity, scientists and the public quickly discovered the intelligence and gentleness of orcas. The evil portrayal converted into a positive curiosity.

Leaving the orcas in peace, we continued cruising around San Juan Island. The naturalists pointed out sea lions, eagles, seals, and even an exotic species of sheep brought to the island originally for game hunting. Just when I was satisfied with all I had seen, we drifted back into Friday Harbor.

A Snack and a Soak

For the evening I had accommodations at Harrison House. Immediately I was welcomed into my room by a plate with a freshly baked cookie and a truffle.

The cookie was beautifully soft in the middle, with just the right amount of crunch from chocolate m&m’s. Bite number two led me in dire need of a glass of milk, so I walked into the kitchen to the fridge on the off chance the caretakers would leave a little milk, and there it was, a glass bottle of creamy milk.

With cookie and glass in hand, I explored my cottage. My last discovery was a hot tub on a private deck. I set down my glass and cookie next to the tub, ran back inside for my bathing suit, and slid into the tub.

I lounged soaking a while before heading back in to cool off with a shower. Harrison House provides homemade organic soap, bubble bath, and lotions. Others were cranberry fig, eucalyptus thyme, and geranium and oakmoss. The combination of smells works as aromatherapy.

A Little Piece of Paradise

Refreshed and in the mood to read a book I dressed in a heavy bathrobe, turned on the electric fire, and started one of the CDs left for guests. The accommodations felt cozy.

The innkeepers have put thought into what their guests may naturally reach for in the fridge and or on the shelves. Fresh flowers are placed in the rooms. And the gardening creates a little piece of tucked away paradise.

In the morning I was offered breakfast in my room or in the dining room. In the mood to chat with other visitors, I came downstairs. A full spread of breakfast was waiting. We had sliced fresh fruit, homemade granola, yogurt, an omelet, a warm, crisp scone, and for dessert, apple pecan crisp.

I proudly admit I am a food junkie. With only a little time before my flight back to Seattle I wanted to find a local cookbook as a souvenir of my trip. I associate food with memories, so being able to recreate a taste, brings back the smell of the ocean, the sight of the boats, and the company I was with.

Serendipity Books on the outside looked like the candy cottage in Hansel and Gretel, but the inside was layered with shelves and stacks of books. A warm fire was going on a stove near the entrance taking the last bite of morning cold from the air.

Pointed in the right direction, I stood in the same spot, not having to move a foot, due to the large selection of used local books. I walked out cheerfully with two selections.

Later in the season, I am hoping to return with my cookbooks. For my next trip, I plan to bring my bike to tour the island on land. There are a winery, a lavender farm, and several beaches that would all be included on my route.

Also during the summer season, the farmer’s market opens. I imagine finishing a day biking cooking dinner with local ingredients and freshly caught fish, enjoying a bottle of wine, and looking out at the sun setting in the west. 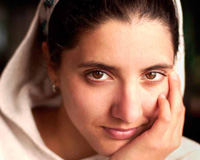 Under eternal blue skies and soaring palm trees, Elizabeth Bagley studied at the Brooks Institute of Photography in Santa Barbara, California.  You can view her work at elizabethbagley.com. Today she lives in Vermont with her husband and young children.