“Jambo, it is time.” Isaac’s wake-up call at 2:00 a.m. on the morning of our summit attempt came after a few restless hours of little sleep. Even before I had started, my mind was exhausted from trying to anticipate the challenge ahead. The combination of excitement, altitude, bitter cold, and lack of sleep, left me questioning the sanity of this adventure.

The hot tea prepared so generously by our porters at this stupidly early hour did nothing to quell the churning in my stomach and the gale blowing outside the hut was hardly reassuring. The only solution was to tie my boots, struggle into the layers of clothing packed for exactly this occasion, and head out into the darkness to meet the mountain on its own terms.

While Nelion and Batian are the true climbing summits, most trekkers opt summit at Point Lenana which, while requiring no technical climbing expertise, is a momentous challenge in its own right and at 4985m merely 200m lower than the high point of Batian.

Trekking in total darkness, a head torch providing only pitiful illumination of the frozen scree and small boulders ahead, there is no indication of direction, incline or altitude and a sleepy mind is of no assistance.

It is simply one laboured step after another, for hours. With the sun beginning its rise we had completed much of the hard work, with only another hour’s climbing – now using gloved hands as well as freezing feet – to Point Lenana.

The brightening cliff faces revealed an intricate network of crags, cracks, and ledges ahead as well as a group of impossibly blue tarns (mountain lakes) behind us that we had shuffled past during the night, oblivious to their existence so close to the trail.

Nelion and Batian, now the smallest that they would ever be for us, were only a short distance away across the brilliant white Lewis Glacier, the contours and channels etched into its surface like the lines on the back of aged hands.

And further away across the perfectly clear horizon was Kilimanjaro, massive even from this distance, its own volcanic peak as flat as Mount Kenya’s are jagged.

“We are very lucky,” reminded Isaac. “Not everyone can say that they have seen Kilimanjaro from the top of Mount Kenya.”

I try to take it all in, to remember it entirely, but the cold is biting savagely and the freezing oxygen-poor air refuses to provide anything resembling a sustaining breath.

“Come,” said Isaac, breaking us too soon from this moment, “I promised to show you something even better than the Mackinder Valley. But we must follow the trail to the other side of the mountain to see it.” And despite believing it couldn’t get better, he is right.

We sit, legs dangling, on the edge of a sheer thousand-foot drop, gazing for miles along the Gorges Valley. The valley is defined on both sides by great vertical cliff faces – ragged black and green parallel walls of rock – which sweep down to the plains below.

The severity of the slopes ease as they eventually come together at the base of the valley, and here sits the still, blue, teardrop-shaped Lake Michaelson. The picture is a contrast of silence and wildness, of the calm and the brutal forces that typify this whole mountain landscape.

The conversation is quiet and sparse, words are redundant up here. It seems impossible now, even if I travel for the rest of my days, that I will ever see anything to compare to this.

On our last morning we reluctantly troop out of camp and drop into the valley as the first signs of vegetation re-appear. The forest is slowly revealed over the ensuing hours with the Black and White Colobus Monkeys in the canopy the first signs of wildlife that we have seen since the hyraxes at Shipton’s, seemingly weeks ago.

Across a clearing eland graze — the largest of all African antelope — with the huts and the end of the trek in the distance.

A swarm of African bees catches us off guard and we’re floored, spread-eagled on the dusty track, until this buzzing cloud clears. It serves to release the emotion of the moment — the melancholy we’re all feeling at having climbed the mountain but now with the end of the adventure in sight — and we arrive, a laughing rabble, into camp.

The heart of brightness

Later we sit with a group of rangers on the porch of the park warden’s hut watching the great grey wrinkly form of an elephant slowly shuffle out of the bamboo forest. It is our first elephant of the trip, on our last day. Mount Kenya has delivered again.

It is clear why this mountain is held in such reverence by all Kenyans, for its beauty as much as for the sacred place it holds in their lives.

Discussion in camp soon turns to which of the great African mountains is best. Both have so much in common but are so markedly different and individual.

Perhaps it comes down to taste. If bigger is truly better then Kilimanjaro is your choice, but if you want to explore the beauty of a mountain virtually on your own, then Mount Kenya’s the one.

The last word goes to Isaac, a man who has spent his years climbing both mountains and is best placed to make such a decision. And with his characteristic simplicity, and as his last act before heading home to his family, he puts the issue beyond doubt: “Kilimanjaro is bigger, but Mount Kenya is brighter.” 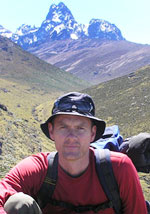 Cameron Fergus, 36, is a freelance writer and business consultant from Melbourne, Australia, who has traveled extensively through East, Central and Southern Africa, Europe and Asia, as well as the great southern land that he calls home.