Ischia, A Hidden Gem of the Tyrrhenian Sea

On the Amalfi Coast, Forget Capri, Ischia is the True Wonder

Who doesn’t like the idea of summering in Europe?

Few countries have inspired tales of romance and wanderlust like Italy, which is why millions of tourists flock there every summer.

Each tourist with the thought of Timothée Chalamet biting into a succulent peach playing in their mind, hoping to live out their own “Call Me By Your Name” love story.

Dripping peaches and romance might explain what drew me to Italy this summer, but credit is owed elsewhere when it comes to explaining why I decided to extend my stay and leave my date dumbfounded on the ferry dock.

For it was not Timothée’s masterful performance that inspired me, but a different movie altogether which I fortuitously happened across one evening while polishing off a bottle of wine on the Amalfi Coast.

To tell this story properly, I must start at the beginning. A new romantic interest had just invited me to Italy for two weeks.

Despite only two dates on record, our chemistry was good and it sounded like too fun of an opportunity to pass up.

So, on a whim, I booked my ticket. Having never been to Italy before, we obviously first explored Rome for a few days. After that, we made our way down to Naples and the Amalfi Coast.

We rented a scooter, stayed in a beautiful cliffside villa, and spent our days sunbathing, sipping espressos, drinking wine, and gorging ourselves on pasta.

Ischia is Different than Capri

It was a heavenly experience for the most part. But as lovely as the Amalfi Coast was, I felt certain places like Capri and Positano were lacking in charm due to the inundation of tourists.

Don’t get me wrong, everywhere was picturesque and the food to die for. As a personal preference, however, I always look for hidden gems when I travel, where large crowds and touristic customs have not yet detracted from the authenticity of a place.

I was thus left wanting more… and I eventually found it, the gem, perhaps not so hidden, but authentic all the same. 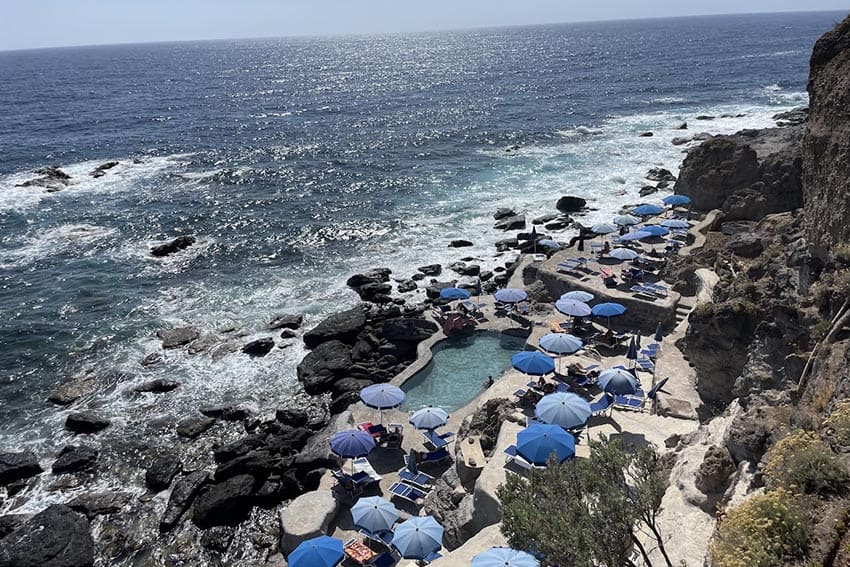 While Instagram influencers and trendy tourists flock to Capri and the Amalfi Coast for their Mediterranean summer getaways, a far less-popular destination sits right across the Bay of Napoli in the Tyrrhenian Sea--Ischia.

The movie that led me to this hitherto undisclosed location was “The Talented Mr. Ripley.” This 1999 cinematic masterpiece is a must-see, if not for the enthralling plot then for its alluring setting.

Filmed on-site throughout Italy, the title was, unsurprisingly, promoted as an Italian Netflix top choice, which made it hard to miss when scrolling through movie options.

I had seen the film once long ago, but many details had been forgotten. Still, I’m not one to often re-watch movies—variety being the spice of life and all—so it was a combination of luck and fate that brought Mr. Ripley’s stomping ground back into my purview, as my date had not seen it and wished to do so. Our bellies full, wine glasses in hand, we kicked back and pressed play.

Much of “The Talented Mr. Ripley” takes place in the fictional town of Mongibello, which, I learned from some quick research during the movie, was largely filmed on the island of Ischia.

I was sold. Within hours of finishing the film, I canceled my return flight and found an Airbnb in Ischia for the entire month of June. I then reluctantly told my date that I wouldn’t be returning on the flight we had planned, which was the news received with both shock and envy.

When our final day in Amalfi arrived, I bid an apologetic but excited farewell and stepped onto the ferry for a 2.5-hour cruise across the Bay of Napoli. It’d be more romantic if I told you that I looked back and blew kisses to my date from the rail, but I had heard the siren’s call. Ischia had already stolen my heart.

I’ve been hesitant to write about Ischia since traveling there for fear of drawing attention to such an unspoiled and authentic Italian island.

Alas, further research suggests that Ischia is already somewhat well-known and touted as being home to some of the best beaches in the Mediterranean. Especially on the part of the island, I opted for, I can assuredly state that the beaches are indeed sublime. But more importantly, at least to me, the feel of the place—the vibe, the charm, the soul, il cuore, whatever you wish to call it—was as real as it gets.

The island of Ischia is unabashedly Italian in every way, from its volcanic vineyards to its ancient castles and idyllic beaches. More than anything else, it was the local characters that marked a form of genuine Italian hospitality and charisma that made for an unforgettable experience.

So I’ll share only the finer points of what made my Ischian holiday so special, in the hopes that my account will inspire you to make your own magical memories in Ischia next summer, instead of losing yourself in the cliché that is Capri.

I woke up every morning in a garden on the seaward side of Ischia, a few kilometers outside of the second-largest town on the island, Forio. The entire island is only 48 square kilometers and can be circumnavigated by road in about two hours.

There’s also a winding mountain pass across the middle of the island, adorned with cute villages and trailheads. Ischia is a volcano, which locals claim, due to its larger size, would yield an eruption far greater than the one that destroyed ancient Pompeii.

For reference, Capri is only 10 square kilometers. But don’t worry, there hasn’t been an eruption on Ischia in over 700 years.

The volcanic activity does, however, usher up from the depths an incredibly rare phenomenon. For centuries the Greeks and Romans came to Ischia for the abundance of fish within its unique thermal waters.

All over the island, natural hot springs pour forth steaming mineral water from beneath the earth’s surface. Some of these hot springs have been cultivated into spa parks and are even used to heat fancy hotel pools. But one hot spring surpasses all the others in my opinion, and it was there that I had unknowingly booked my Airbnb.

My garden suite was part of a small farm that had been passed down through a local family for generations. Development on the island is pretty much forbidden, as all of the land is protected.

According to my Airbnb host, if you want to build on Ischia, you either have to “know” the right people or do your construction very incrementally, usually at night, so as to not be noticed by the authorities. Therefore, my surroundings were surreal.

My room had all of the modern comforts, sure, but just beyond the garden fence, there was nothing but peach trees and vineyards. And within the fence, the garden proffered lemons, figs, endless other fruits and vegetables, eggs, and even rabbits.

Every day I left the property and walked down a dirt track through a vineyard to the beach.

This beach was at the bottom of a long stone staircase. It’s called Sorgeto Bay (Baia di Sorgeto) and it’s not an ordinary beach.

Salty seawater is the temperature of a hot tub—not many places in the world offer such a thing. And to cool off, you need only swim out a few strokes into the turquoise waves.

What’s more, the thermal baths were perfect for brisk evening escapades and late-night skinny dips under the moonlight.

The amazing thing was, the beach wasn’t often crowded, especially at night, providing the perfect place for me to eat my just-picked peaches in peace.

The people I met at Sorgeto—including an alternative fellow who went by the name of Thor and for good reason given his similarities in appearance to the Norse demigod—will not soon be forgotten.

Thor, in fact, lives at the beach full-time, and although some would classify him as “homeless,”

I have no reservations in saying that he has built a home and life for himself in Sorgeto to be proud of.

Harvesting fresh muscles from the sea daily, fishing, picking fruit, and bartering for various items, Thor was tanner, healthier, and happier than most I’ve encountered on my journeys, the personification of non è tutto oro quello che luccica.

He had given up his job and broken out of what he called the “simulation”  years prior. There’s no need for money or stress, he told me. Sorgeto Bay and the exceptional island of Ischia have everything he needs free of charge.

Now, I’m not advising you to quit your job too and post up on the beach next to Thor for the indefinite future, but I am advising you to go have a taste, a taste of a fresh Ischian peach and a bite out of a true Italian paradise.

If Thor is still there, say hi from American Phil and ask him for a ride on his canoe to the secret beach in the neighboring bay.

Perhaps you’ll find some ancient Roman treasure buried there, though the island itself is certainly treasure enough, a hidden gem in the Tyrrhenian Sea. 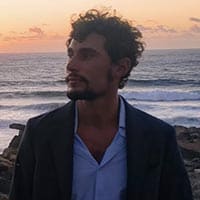 Philip Finkelstein is an avid writer and traveler with a degree in political science from the University of British Columbia. Originally from Vermont, he now resides in Manhattan where he’s working on the publication of his first novel, a dystopian thriller about American culture and geopolitical tensions. Always exploring new places in search of his next story—follow Phil’s journey at philipfinkelstein.com or on IG @felipefinklez