China: The Splendor of Anhui Province

China: The Splendor of Anhui Province

“Watch out for the water buffalo around the corner,” cautioned my wife, as I backtracked through the dampened alleyways in the rural village of Tangmo.

Rounding the corner, I pulled up short, the passage blocked by a beast of burden. With a mouthful of hay and a homemade yoke, he swiveled his head and eyed me lazily, as kids in the neighboring house giggled.

Welcome to picturesque Anhui Province. Located southwest of Shanghai, this area will engage your curiosity as you experience the diversity of China. Spend time in Tunxi and browse the Old Town merchants.

Visit ancient villages and savor the simple rustic life. Scamper up weathered steps and offer homage at a colorful Taoist temple. Best of all, explore Huangshan, one of China’s endearing mountains.

Tunxi, populated since the ninth century, is the principle transportation hub in Anhui province. The modern bus station sits on the outskirts of town, where cabs whisk you downtown for a buck. In the lobby, an information booth waits for Western tourists and an opportunity to practice their English.

Tunxi is bisected by Lao Jie (‘Ancient Street’). This pedestrian friendly passage vividly depicts modern China as it strains to evolve into the new millennium.

Gradually Lao Jie morphs into a venue of Western stores hawking t-shirts, cell phones, and designer fashions. Here the youth of China congregate, as Western music blasts from the storefronts.

With a questionable business model of ‘the loudest music attracts more customers’, it appeared as if there was a contest to see who could deafen the most people.

In search of t-shirts, we foolishly entered a store where my eardrums rattled like a pair of cheap paper speakers.

Half way down Lao Jie was our favorite restaurant, Meishi Renjia. As the chef uncovered the bamboo baskets in the cafeteria-style row of food, I thrust a thumb up while arching my eyebrows, hoping for a reaction.

Neutrally wobbling his hand at many of the dishes, I marked my order and returned it to our waiter. Be patient, since it is unlikely anyone will speak English.

The mountainside hamlet of Qiyun Shan is forty-five minutes outside of Tunxi. Stepping on the bus, we pointed to the town on the map, and the driver vigorously nodded his approval.

As we stopped next to a weathered brick building, he caught my eye in the rear view mirror and motioned us forward. Hunching down in the window, he pointed up the side of the mountain where Qiyun Shan poked through the fog.

We climbed through shaded forests, past shelters and shrines, before dropping into a canyon that cuddled a terracotta Taoist temple embedded in the sandstone cliffs.

Offering a donation under the inquisitive eye of the resident priest, we lit a candle at the flashy altar before continuing on the path to Qiyun Shan. Here we relaxed over a rice bowl and warm beer while enjoying the extraordinary views of the valley below.

A gurgling stream led us downhill into humid rice fields. We came upon a proud farmer who showed off his stacks of homemade bamboo cages that held hundreds of tiny peeping ducks destined for market.

Farther on, a child rode his toy Harley-Davidson along the path under the watchful eye of his parents. Eventually we reached the main highway and flagged down a bus headed back to Tunxi.

On To Huangshan and Ancient Settlements

Huangshan, known as ‘Yellow Mountain’ because of its jaundiced granite formations, is a recreation region forty-five minutes from Tunxi.

The town of Tangkou sits at its base, split by a river spilling from the mountains. The prices of accommodations are based on their elevation, with rooms in Tangkou the least expensive, and those on top the mountain the priciest.

We planned to spend two nights on the mountain, but a series of rainstorms disrupted our plans. Noting the ‘We Speak English’ sign outside Mr. Cheng’s Restaurant on the main street in Tangkou, we entered and introduced ourselves. Mr. Cheng was a great source of information, recommended several day trips, and arranged a car and driver.

Waiting out the storms, we visited the third century town of Chengkan, and played hide and seek within the maze of streets.

As we peered through darkened doorways, the inhabitants acknowledged our interest with a slight nod of their head. Many rooms displayed a bright red image of Chairman Mao, still a revered figure in Chinese history.

Equally delightful was buffalo friendly Tangmo, constructed in the 7th century, and set along a river criss-crossed by stone bridges.

We stopped at the only souvenir shop, bought apples, and followed an enthusiastic artist who led us to the roof of his studio for an overlook of the town. Residents passed the day in conversation along the riverbank, sipping tea, playing dominoes, and smoking cigarettes.

The nearby UNESCO World Heritage Sites of Hongcin and Xidi are popular with tours groups. In Tangmo and Chengkan, we were the only tourists in town. However, both Tangmo and Chengkan have applied for UNESCO status, and soon tour buses will unload large groups into these settlements.

For now, these two communities are under the radar, and retain the look and feel of authentic villages.

Another day, we headed to Emerald Valley, a brilliant canyon embedded with turquoise pools of water, huge granite boulders, and stunning bamboo forests.

It was no surprise that many of the scenes from the movie ‘Hidden Dragon, Crouching Tiger’ were filmed here.

We later hiked up to Nine Dragon Pool Waterfall, a thunderous cataract that plunged off a yellow granite shelf into a series of nine pools on its riotous journey down the mountain.

Finally, with a one-day window of clear skies, we arrived at the cable car station early in the morning and were whisked up four thousand feet in eight frightening minutes to White Goose Ridge. The only things more frightening were the thirty-dollar entrance fee and the twelve-dollar cable fee (per person).

Clear skies afforded iconic views of granite outcrops studded with lonely trees grappling for a foothold. Well-marked maps and English signage guide you to dizzying outlooks, as ‘Flower Blooming on a Brush Tip’ drifted among the dissipating haze.

Newer sections of the mountain featured acrophobic catwalks bolted to the side of granite spires. It was as if a walkway was attached to El Capitan in Yosemite, which led tourists down into the valley floor.

Arched bridges, suspended thousands of feet in the air, spanned a few of the pinnacles, where tourists hopped from spire to spire. Attempting to decipher ‘Stone Monkey Gazing upon a Sea of Clouds’, I noted the loose, rusty chains – the only defense between long life and certain death.

Young women in their finest dresses, ridiculously attired in high heels, pranced around as if at the mall, while people scurried about with plastic bags filled with snacks. Stopping for a six-dollar coffee, we watched as the mountain top hostel set out soggy tents to dry.

After exploring the summit, we began our journey down the Western flank at the appropriately named ‘Flying Rock’. Slithering through the cleaved boulder ‘Gleam of Sky’, we crested ‘Lotus Flower Peak’ then clambered up divine ‘Heavenly Capital Peak’.

Sliding down the narrow stairway, we began the eight and a half mile downhill path to the valley.

Halfway down, we paused to catch our breath at Banshan Temple. Lance Armstrong type laborers inched up the trail in a steady cadence, hauling bags of rice, cases of soda, and a compressor lashed to a thick bamboo branch.

Heck, for twenty bucks, porters will haul you up the mountain in a bamboo chair like Cleopatra. After three and a half hours, we arrived at Ciguang Temple and caught a bus back to Tangkou.

For days afterward, my quads were so sore that it was painful to walk down stairs. Nonetheless, it was a small price to pay for the spectacular scenery of Yellow Mountain.

Humble villages, Taoist temples, bamboo forests, and mystical mountains make Anhui province an intriguing and diverse destination. A cultural oasis in a magnificent natural setting, this was one of our favorite areas in China. 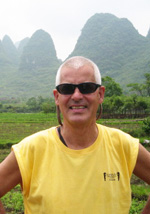 Bill Pfeffer has recently returned from a thirteen-month trip around the world overland journey. He lives in Northern California, and is a successful artist and aspiring travel writer. Visit his website Bill Pfeffer.com.

Bill Pfeffer was born and raised in Manitowoc, Wisconsin, along the shores of Lake Michigan. After graduating from the University of Wisconsin with a degree in Economics he moved to California. He is a plein-air oil painter of landscapes and seascapes, preferring to paint on location under the pressure of changing light and weather, so as not to deliberate so much over each and every stroke of paint. He has painted every beach scene along the Sonoma coast, his favorite location for spending the day. He and his wife Marge enjoy traveling around the world.

www.billpfeffer.com
This article was last updated Nov 20, 2018 @ 1:12 pm
If we've inspired you to travel with this story, why not check out the prices to get there and make it happen. Search airfares, hotels, and rental cars here. Thanks!