Alabama Attractions: A WWII Battleship and a Classic Performance

A chill went through my spine as I strode up the gangway to the USS Alabama, anchored just off the coast in the Mobile. It was a cool morning on Mobile Bay, where in the 1960s this 680′ long grey piece of historical steel was towed from a West Coast shipyard to the state it was named for.

Walking around on such hallowed steel made me think back about the real heroes, like my father, who served during the Second World War on ships like these.

The legend has it that Alabama school children sent in their ice cream money in order to raise the million or so to pay for the relocation. On the ship, swing music is piped into the galley and on the deck, reminding me of the era in which this ship served active duty in the Pacific. It was a short stint, just 37 months. She sailed almost around the globe, served her time, and now she’s by the side of the bay for tourists to walk around on and gawk at.

On the shore sit other historic vessels and aircraft. A diesel Submarine, the USS Drum, is up on pilings, and a monstrous B-52 sits up on the lawn.

The average age of the enlisted sailor was about 21; many were much, much younger. Many of the soldiers and sailors of WWII were too young but didn’t want to miss the excitement and so they got in anyway.

While the Battleship was one of our morning stops, we traveled on over the two-lane highways through southern Alabama. On the sides of the road most of the houses were built on cinder blocks, no cellars down here. Peanuts were for sale in every store and some downtown storefronts were sad and bare. It seemed the towns here are either thriving or just out of gas.

We passed a facility that makes big tall telephone poles and pilings for docks. These straight and tall pines were decimated by Hurricane Ike in 2005, flattened and down. The result is far fewer trees for lumber and poles, and much more for pulp and paper. A man in Monroeville said that he notices it a lot when he goes out hunting, acres of blown down trees. It was a brutal storm.
The Courthouse in Monroeville, AL, where each spring the town performs To Kill a Mockingbird starring local citizens as actors. 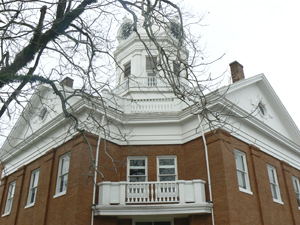 In Monroeville, their claim to fame is a literary one… Harper Lee’s seminal novel, To Kill a Mockingbird was written here, based on these same small towns. At an advanced age, Lee still lives in these parts, and the courthouse dates back to 1903.

The movie starring Gregory Peck was filmed here and every year the 7000 residents of Monroeville join together for a series of performances.

They put on the stage version using the outside of the courthouse for Act 1, and the gorgeous round inside of the court for Act 2. It brings lawyers, local businessmen, and children together to play the familiar roles such as Scout and Atticus in the play which takes place in late April and May every year.

The other notables that Monroeville likes to claim as its own are novelist and man-about-Manhattan Truman Capote, as well as legendary musician Hank Williams. Truman’s beloved aunt lived in Monroeville, and he liked to come down and visit. Once Capote came in his new Jaguar XKE and wowed the townsfolk, and his photo appeared in the local newspaper.

The Old Courthouse Museum is a must-see for anyone who wants to know more about both Harper Lee and Truman Capote. Sadly, the house where Truman lived for a short time has been torn down, now there’s only a rock wall and a soft-serve ice cream joint there.
Inside the courthouse at Monroeville where the movie was filmed. 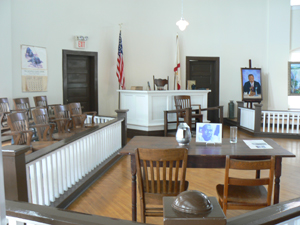 Along the Gulf Coast, storms can whip up pretty quickly, as we found out one day as we ate breakfast on the outdoor deck of Tacky Jack’s in Orange Beach. A ferocious thunderstorm came up after looming grey clouds rolled over us. We retreated inside and found out that this little joint is a frequent favorite of music star Jimmy Buffet, who comes by on one of his boats. He was born in Mobile and loves the Gulf shore area.

Alabama we learned, loves big, big portions of just about any meal, and more than once our waiter made the claim ‘nobody ever finishes that’ with a hint of pride. (I kept thinking, ‘Maybe you should serve a smaller portion,’ but I’m not from Alabama, so what do I know?)

Example A would have to be the omelettes at Tacky Jacks. They are so big they cover the entire plate! Below the eggs is a nest of homefries…and yes, nobody will finish such a mountain of food. The same thing with the bread pudding at Wintzell’s Oyster House in Mobile. A little too much of a very good thing!

Our guides said several times with a smile that we should stop by Florabama. It’s a funky rambling shack where great music is played and there is a beam extending across the middle of the main dance area.
Breakfast at Tacky Jacks in Orange AL. photo by Max Hartshorne. 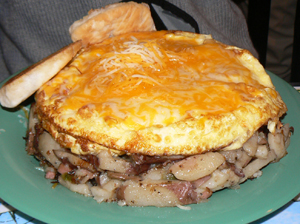 It is lined with a hundred or so woman’s bras, displayed in all their glory, with a lone pair of men’s boxerbriefs up there with them.

The night we popped in the rocking band was playing ‘Hot Rod Lincoln’ banging it out on a stand-up bass and a full outfit of guitars and drums.

Girls wearing tanks and halter tops slithered through the bar, with the thunderous noise of the band keeping anyone from speaking clearly to one another. At the door was a muscular woman with big tatoos and a line of Harleys stretched down the entrance. A popular drink is the Bushwacka, Frozen yogurt and 151 rum.

To many of the jaded denizens of the Northeast USA, Alabama isn’t a spot they’d ever consider visiting. But the fact is, Alabama has a whole lot to offer, and is among the most beautiful places in the entire Southern half of the US! There are some blighted down-on-their luck towns, scarred by closed paper mills and desolate downtowns, but then you come to a town like Fairhope, and are struck by the flowers along the sidewalk and the bustling cafe culture.

We found many such surprises; Foley with its sprawling model railroad display and town spirit, Monroeville with its townwide appreciation of a truly classic American novel, and the lovely sprawling beach towns on the Gulf like Orange Beach.

Any state where they have a thing like a Jubilee, (where fish and clams beach themselves to be picked up by waiting seafood lovers) is a special place… and whether it’s Alabama’s “Roll Tide” or Auburn’s “War Eagle,” I’m now a fan of the state that the locals lovingly call “Sweet Home Alabama.”