Experience the Beginning of America’s Civil War at Fort Sumter

At 4:30 PM on April 14th, 1861, after nearly 34 hours of concentrated bombardment from the surrounding Confederate batteries, Major Robert Anderson lowered the flag of the United States of America and he and his beleaguered Union command marched out of Fort Sumter South Carolina to the tune of “Yankee Doodle Dandy” with their heads held high.

Thus began 4 years of intra-familial horror. The attack on Fort Sumter played an outsized role in the beginning of America’s Civil War.

Exactly four years later, Anderson stepped towards the flagstaff of the nearly unrecognizable fort where he and several survivors of that day raised the very same, bedraggled flag to the top of the 150-foot-tall flagstaff.

As it unfurled and snapped to attention, the band played “The Star-Spangled Banner.”

161 Years Later…What happened in the Battle of Fort Sumter?

Nearly 161 years later, as Park Ranger James Drass shared these facts about the battle for Fort Sumter with us under a warm mid-morning sun, 14 volunteers, including my wife Kathy, stood by holding the United States Flag while a Marine Corporal on leave grasped the halyard.

At Ranger Drass’ signal, the corporal heaved on the line which lifted the flag upwards and out of the reverent hands of its guardians.

As the flag reached its peak and was tied off, Drass spoke passionately for several minutes as to what the flag meant and the significance of the continued unity of the States of America that those 4 hard-fought years had wrought. “We are a diverse country. There is no doubt we will have differences.

But despite those differences, we are all Americans. We should never forget this” It was a moving moment for all of us in attendance and not one that will soon be forgotten.

We had started our visit earlier that morning at the Fort Sumter Visitor Education Center at Liberty Square along the waterfront of Charleston, S.C. Fort Sumter sits on a 2 1/2-acre island in Charleston Harbor and is only accessible by boat.

We had decided to walk to the Square that morning to learn more about Fort Sumter history. Misjudging the length of our walk, we hurried the last several yards in order to catch the first ferry of the day. Our water-borne transference this day was the Spirit of the Lowcountry, a modern interpretation of an early side-wheeler. Its 3-decks of understated charm were our time machine to a much earlier time.

We settled into chairs on the upper deck which provided a great vantage point to see Charleston by water. The views from the boat are beautiful. The trip itself takes about 30-45 minutes. As we sailed The Charleston Harbor, we neared Shutes Folly, a small island that is home to the little-known Castle Pinckney, a deteriorating 19th-century fortification. We also sailed passed Patriot’s Point, home to the USS Yorktown, one of 24 Essex-class aircraft carriers built during World War II.

As we continued along, a volunteer provided running narration about the harbor, the sights, and, especially, Fort Sumter. He went into more detail about its role in the Civil War and how the war affected Charleston.

By 1861, Fort Sumter was a looming presence that consisted of an unfinished five-sided stone masonry fort with 55-foot tall walls.

As tensions between North and South escalated in December 1860 with the secession of the state of South Carolina, Major Anderson and his 85 troops occupied the unfinished fort. At that time, only 60 out of the planned 135 cannons were mounted and in place. 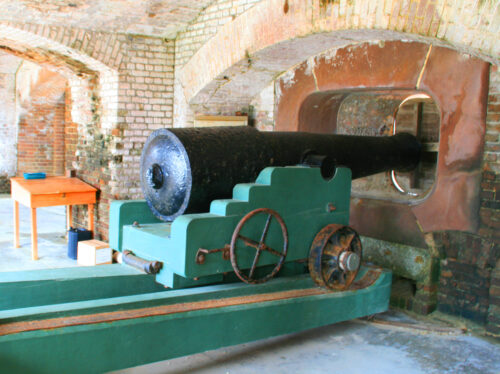 On the morning of April 12, 1861, tensions finally reached the breaking point. At about 4:30 a.m., a mortar shot arced into the air and exploded over the fort as other Confederate batteries joined in and opened fire on Fort Sumter. After facing a severe bombardment, the Union-held fort surrendered the following day.

Upon capture, Ft. Sumter was the South’s symbol of defiance and had to be defended at all costs. It was a symbol of secession for the North and had to be taken at whatever cost.

Over the next four years, the union made several assaults and fired nearly 50,000 projectiles at the fort. Confederates held Fort Sumter until February 1865, only weeks before the surrender of General Lee’s Army of Northern Virginia on April 9, 1865.

As our boat docked at the wharf, I was surprised at what we encountered. Although the aged masonry-and-brick walls are still there, the exterior of the fort retains little of its appearance in 1861. When I asked the ranger about this, he stated that Union artillery had effectively reduced it to a standing pile of rubble.

The damage wrought and the simplistic Confederate repairs to Fort Sumter had transformed the former three-tiered brick-and-masonry monolith into a barely recognizable shell of its former self.

Today, a red band around the flagpole several dozen feet above our heads marks the height of the walls before the Civil War began. Inside the walls, several huge, black cast-iron cannons are on display throughout the grounds and in the cavernous casements (gunrooms).

One, a 15-inch Rodman cannon with its oddly bottle-shaped appearance, weighs in at over 50,000 lbs. and could toss a 400-pound shot over 2.8 miles. Nearby, the unrepaired brick ruins show the devastation inflicted during the course of the war. A rusted artillery shell lay embedded in one of the damaged walls. It is one of at least 4 shells that remain impacted in the brick.

Today, viewing the serene surroundings, it’s difficult to imagine what the occupants, of both sides, must have endured during the course of the 4 years of the steady destruction by shot and shell.

I stood atop of the grassy mound of earth that effectively covers a portion of the ruins, and gazed across the harbor towards Charleston and wondered of its inhabitants as they stood on rooftops some 161 years ago and cheered as shells plunged into the citadel.

Believing, as they did, that the war would be short-lived, I wondered if they ever considered the eventual outcome— and its consequences?

That same thought occurred to me as we slowly returned across the harbor past the forlorn-looking Castle Pickney. It was long ago reclaimed by nature as trees, brush and vines enveloped the walls.

A roost for scores of Pelicans and abandoned by both state and federal authorities, a lone flag pole stood upon it with its Stars and Bars, a flag of the Confederacy, hanging desolately over the grounds.

Abraham Lincoln said, “The last ray of hope for preserving the Union peaceably expired at the assault upon Fort Sumter…” Today, the broken ramparts of Fort Sumter stand both as the genesis of our greatest national conflict and of the nation’s great resilience. 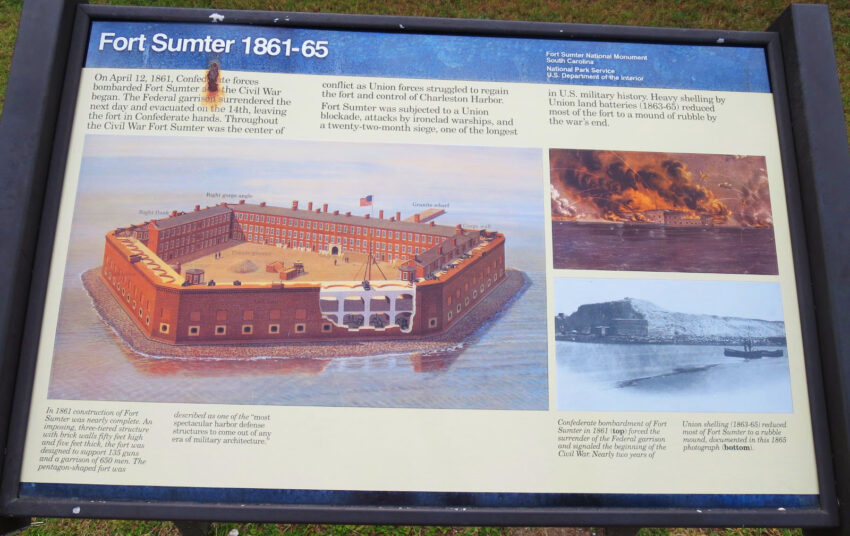 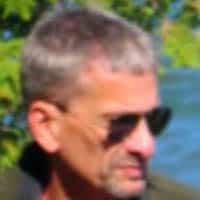 Frank Hosek is an Illinois-based Director of Human Resources who revels in traveling with his wife, Kathy.  He enjoys discovering new experiences, meeting the people that make those experiences enjoyable, and sharing their adventures. He has been published in local Illinois newspapers and online.