Vienna: Chocolate and Coffee with Your Grandmother 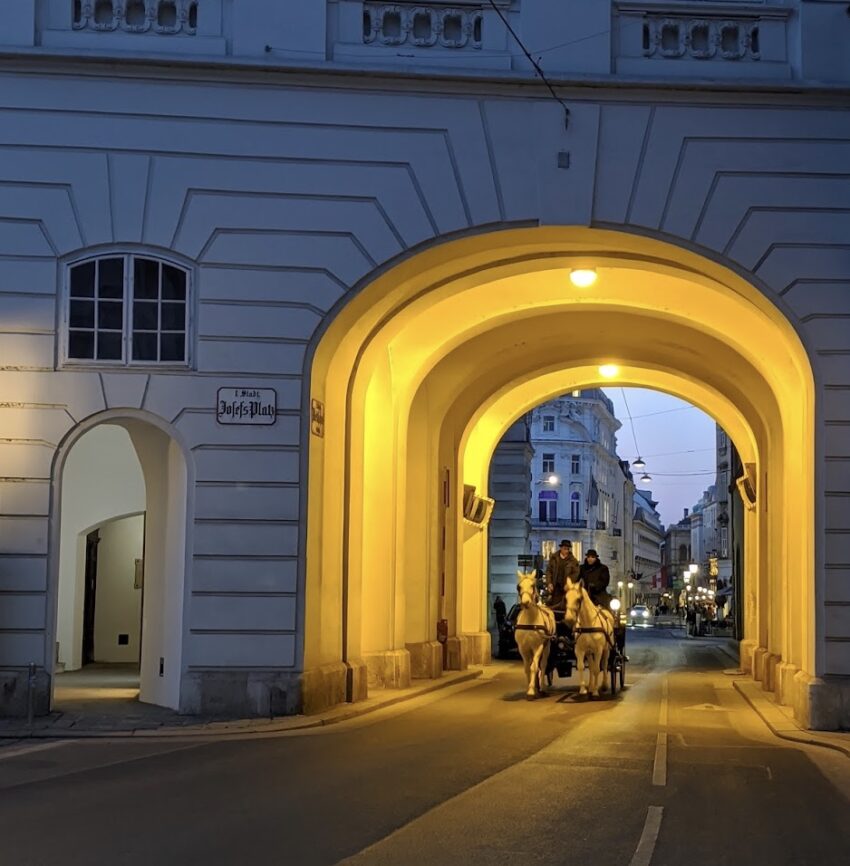 A Guide to Vienna’s Chocolate, Cake, and Coffee, Plus a Grandparent’s Cafe

On the fifth floor of the Sacher Hotel, I discovered one of Vienna, Austria’s remedies to jet lag: a luxurious and relaxing massage gloriously scented with coffee and chocolate.

In a cozy, candle-lit room, a masseuse buffed away my dry skin with a coffee scrub. Then, she worked away the lingering stiffness from my nine hours of flight time with a soothing cocoa butter lotion.

Little did I know, this Time to Chocolate treatment from the Sacher Spa would foreshadow my experience of Austria’s capital Vienna.

While Vienna is a mecca for regal histories and the classical arts, the city is also heaven on earth for all coffee and chocolate enthusiasts – such as myself.

By being in the historic, family-owned Sacher Hotel, I was also in the home of the Sachertorte. Franz Sacher created this chocolate and apricot cake for Prince Metternich in 1832.

When Franz’s son Eduard opened the Sacher Hotel in Vienna 44 years later, he trademarked the original recipe to make the Sachertorte the hotel and adjoining café’s hallmark.

Inspired by this sweet history, I made it my mission to sample as much cake, chocolate, and coffee as possible while sightseeing around Vienna. Here are the highlights.

I wanted to see Vienna’s quirkier side. I had read online about a café in the city, run entirely by grandparents, and I was keen to experience it. To reach one of its locations, I walked through Naschmarkt.

In a city so pristine with its baroque architecture and towering statues honoring music greats and influential rulers, I found the relative grunginess of Naschmarkt to be a refreshing surprise.

This 1.5 km stretch of market stalls and restaurants along the Weinzeile is full of life and color – partially from the graffiti on shuttered market stalls.

Vendors sell fresh produce, meats, seafood, and baked goods every day (except Sunday) from 6 a.m. to 9 p.m. There are also tons of international cuisine options from which to choose.

But today, I chose to forgo a snack in Naschmarkt for some cake made by Austrian grandparents.

Baked and Served by Grandparents

Vollpension (German for ‘full pension’) is another innovative and impactful take on the Viennese coffee house.

All the cakes are baked with authentic family recipes and served by grandmas and grandpas to combat poverty and loneliness in old age.

“It started in 2012 as this funny idea and got bigger and bigger,” said David Haller, co-founder and self-proclaimed ‘grandma-whisperer’ of Vollpension.

Haller outfitted the space with comfy armchairs and sofas, old-timey floor lamps, gallery walls full of family pictures and needlepoint artwork, and throwback music from the ’60s to ’80s. Guests can even lock their cell phones in a box to facilitate conversation and receive 10% off their bill.

At the pastry case, I ordered a slice of marbled chocolate hazelnut Gugelhupf from a grandma who I learned, in addition to her baking job at Vollpension, is a part-time actor on the Viennese stages.

Our host grandmother, Hélèna, also had a fascinating life story. Originally born in Switzerland, she fell in love with a man from Vienna only a few years ago. Her love for the man and Vienna itself convinced her to start a new life in this city in her golden years.

For my first day in Vienna, I booked a walking tour with a local guide. Alexa Brauner had over thirty years of guide experience and a lifetime of living in the city, so I knew I was in good hands.

We started at Schloss Belvedere (one of the Hapsburg royal family’s previous residences and an art gallery currently home to Gustav Klimt’s The Kiss painting).

Over a couple of hours, we walked through the First District, over to the Danube River, and ended at the Austrian National Library.

I was surprised by how easy it was to navigate the city. As Alexa informed me, you can always tell what district you are in by glancing up at a numbered street sign. Vienna has 23 districts, with the First District as the center of the city and districts two through nine spiraling out clockwise from it.

Though the city is already very walkable, the tram system can get you around even faster and operates 24/7. I’d suggest purchasing the Vienna City Card. It allows you to hop on and off the trams whenever you please. Plus, it gets you discounts on many of Vienna’s museums (such as the newly renovated and expanded Sigmund Freud Museum) and eateries.

As part of my tour with Alexa, we visited Kurkonditorei Oberlaaa for a pick-me-up of coffee and cake.

Vienna has over 2,500 coffee houses, each stocked with glass cases of pristinely-crafted and mouth-watering pastries such as nut or chocolate tortes, poppy seed cakes, cheesecakes, mousses, Gugelhupf, and strudels.

To experience Viennese life, it is essential to experience the coffee house culture. “In a coffee house, it’s important to sit down, be relaxed, and get the warm feeling of being welcomed,” said Alexa.

Coffee houses promote relaxation by offering plush velveteen seating, complimentary glasses of water, and an unlimited time to linger over your cake and coffee (though, of course, within the coffee house’s open hours).

Some coffee houses also offer a schanigarten, or outdoor terrace, to enjoy.

The coffee house is for everyone. Locals, politicians, writers, actors, and tourists all utilize coffee houses as places to reconnect with friends or take some quiet moments to themselves.

I was thankful to have Alexa (and, on a later coffee venture, a waiter from famous and family-owned Café Landtmann) break down the coffee offerings for me.

Vienna has a unique vocabulary for coffee. Often, the term coffee is synonymous with espresso, or Mokka, as the Viennese call it. The city’s signature coffee menu includes around 20 brewing preparations such as:

On my second day in Vienna, I took more time to explore the First District, particularly along the lively pedestrian and commercial street Kärtner Straße. I passed by numerous clothing stores, a Rolex store, a casino, a protest, and some talented street performers singing opera.

The bubble gum pink interior of Café Aïda stood out against the street’s other regal, white stone buildings.

This Vienna-based chain is abundant in the city, family-owned, and offers many reasonably-priced cake and coffee options. It brought the first espresso machine to the city in 1946.

I was surprised to see even the McDonalds along this street equipped with an espresso bar and pastry case. But for a more authentic experience in the area, I’d suggest Café Diglas with its cocoa powder dusted cappuccinos.

The street culminated at soaring St. Stephen’s Cathedral, one of the city’s greatest landmarks. You can go inside the cathedral from 6 a.m. to 10 p.m. and – if you’re lucky like I was – catch a Holy Mass in progress.

But what I also found thrilling about this area was the at least seven different chocolate stores located within a two-minute walking radius of the cathedral.

The Manner and Heindl stores in Stephensplatz are more affordable options. For Manner, you must try their iconic wafer cookies with chocolate hazelnut filling. The store is just to the left when facing the cathedral, so it’s hard to miss.

The Heindl store, across from the cathedral, offers an array of chocolate bonbons. I loved sorting through the marzipan, praline, nougat, and cream-filled bonbons from the bag-your-own pick and mix section. The boxes of Mozartkugeln and Sissi Taler make for especially great souvenirs.

Heindl also has a Schoko Museum in the 23rd district where you can sample and learn more about the sourcing and production of their candies.

Or, venture another street over from St. Stephen’s to reach family-run Leschanz (with an original 1844 wooden interior) and Altmann & Kühne for high-quality, hand-crafted chocolates. Especially around Easter time, you’ll be amazed by their bunny molded chocolates, truffle eggs, and beautifully designed packaging.

The one chocolate store I was suggested more times than I could count was Xocolat. So, on a clear and crisp Vienna evening, I made my way to the Xocolat store in Freyung’s beautiful Passage des Palais Ferstel. The arcade reminded me of those in the City Centre of Cardiff, Wales.

It will be hard to forget the rich and fruity aroma of chocolate that hit me as soon as I passed through the door of Xocolat. The store’s massive chocolate counter was my first sight. Small mountains of perfectly spherical, hand-made truffles were displayed behind the glass.

Ceiling-high wood shelves full of chocolate bars and drinking chocolate mixes lined the walls of both of the store’s large rooms. Every chocolate bar was meticulously arranged by the percentage of cocoa and the cocoa beans’ countries of origin.

Never in my life had I seen such a massive variety of high-quality chocolates.

My only further wish would be to experience one of the workshops offered at their Xocolat Manufaktur location. The store suspended its workshops since the onset of the pandemic. But in their heyday, you could sample and learn how to handmake their truffles alongside bottomless glasses of sparkling wine.

After a nearly impossible time deciding which chocolate bars to purchase, I ended my night strolling back to my hotel: the Grand Ferdinand on the Ringstraße.

On the way, I peered into the dimmed interior of Café Couture where I could make out their single-origin filter coffee offerings. Similar to Xocolat’s mission with chocolate, coffee houses like these are bringing the third-wave coffee culture of high-quality and responsibly-sourced coffee to Vienna.

I continued along Herrengasse and Josefsplatz. The glow of the Hofburg in the moonlight, the clop-clop of horse-drawn carriages passing me in the street, and the impressiveness of the Spanish Riding School’s white Pegasus statue made for a scenic stroll.

It isn’t hard to understand why so many people fall in love with this beautiful city along the Danube and home to the University of Vienna.

The plethora of art and history museums, Beethoven and Mozart concerts at the Vienna Philharmonic, and impressive international embassy buildings around the city are sights to behold. But I believe the real soul of Vienna and its people lies in its coffee houses and chocolate shops.

From original family recipes to social consciousness in products to coffee houses spanning the Austrian Empire and both World Wars, the authenticity and history you can experience from the cake, coffee, and chocolate of Vienna is remarkable.

One could even say: that when it comes to coffee house culture, Vienna takes the cake.

Dana Armstrong is a travel, arts, and culture writer based in Virginia. Her work has been published by the Pulitzer Center, where she was a 2021 Reporting Fellow, the independent zine Everything But…, and newspapers and magazines in northern Virginia. She studied journalism and dance at William & Mary and received her Bachelor of Arts degree in 2021. When not writing or travelling, teaches tap and ballet at a local dance studio.