Fredericksburg Texas: Convincing an 8-year-old to Love It

Creating a Chance for Change in Fredericksburg, Texas’ German Town

“Your life does not get better by chance, it gets better by change.” read the fortune cookie from our Chinese food takeout. Were those words on a narrow strip of paper reaffirming my decision on this road trip?

Or was it prodding me for something more drastic? My mind tried to decipher the kernel of wisdom in the context of a road trip me and my 8-year-old son were on.

It was our second day in Fredericksburg, a small town of German heritage in the heart of Texas hill country.

We had driven almost 5 hours from Dallas the day before and checked into a treehouse.

One that had caught my eye two months ago with pictures of a bright and airy treehouse, as I had been scratching the itch of a wanderlust searching for ‘best road trips in Texas’.

It had tall french windows that overlooked a creek, nestled amidst a green canopy of trees and a deck that wrapped around the treehouse.

With string lights along the path to its front door and a hammock on its deck to complete the picture, it was idyllic personified.

With just over 10,000 people in the present day, Fredericksburg was established in the 19th century by German immigrants. It is known for its wineries, shopping, arts, and food, all of which seemed to have a certain German flair to them.

We unloaded our luggage from the car and headed to the Hondo’s on Main street in Fredericksburg. The place was swarming with locals and tourists alike for a weekday. The live music and outdoor seating seemed like a nice way to ‘do it like the Germans did’ to unwind.

The place was also known for serving the best “stiff” margaritas in town. It sounded like a drink that a weary traveler could use after five hours of being on the road. One that I nominated myself for, as I settled in to enjoy the energy, music, people, and the company of my son.

After dinner, we drove along the main street’s historical buildings, boutique stores, and art galleries when my son said,

“There isn’t much to do here, mamma. It is boring. Can we drive back to Dallas tomorrow?”.

“Each place has its own charm, buddy. Just give it a chance.” I said.

We retired for the day at our treehouse, which was all that it had promised to be in the pictures. We fell asleep gazing into the views of the vast night sky ahead of us, a view that was visible from our loft bedroom upstairs.

The magical experience of a sunrise

The gentle light of morning sunrise woke me up the next day. Eager to catch a glimpse, I hurried out to the deck. And there it was.

A red ball of a glowing fire on the horizon, framed by the trees cradling the deck. Birds of various kinds chirped like it was a symphony playing different instruments.

Except there was no conductor in sight. Yet it was melodious. The air was calm and smelled fresh with a slight hint of woody and mulchy undertones. The creek nearby flowed in peace.

After taking in the views that surrounded my soul, it was time to head to the Enchanted rock. A monolith of granite that held a 360-degree view of Texas at the top.

As I woke up my son, he rolled over asking to snuggle in bed for a bit longer. “You need to chill mama. Take a chill pill. You are working all the time, cooking, cleaning, or taking care of me or something else.” Amused at his newfound use of the phrase for me, I gave in to a little snuggle time.

One foot in front of the other

It was a 25-minute drive north of Fredericksburg to arrive at the Enchanted Rock State Park. Our goal was to scale to the top, but I had mentally prepared myself for any limit my 8-year-old imposed. It was a 1.5 mile round trip with the trail marked as challenging.

Standing in front of the Rock, he was filled with doubts.

“Sure buddy. Let’s see what we can do and how far we can go. If we feel up for it, let’s keep doing it.”

The granite rock radiated heat from below and the noon sun covered us from the top, just to be sure, in case we weren’t feeling evenly roasted head to toe after our hike. We slow-hiked up the rock, stopping for water three times in 100 yards at my son’s request.

Before long, we had made it to the summit. It was their first summit climb for him.

“I can’t believe we made it to the top mamma. Can you?” he declared with victory and disbelief in his voice.

“When we put one foot in front of the other, we can summit any mountain. That is kinda how life is too. I am so proud of us, buddy.” I said. “I’m proud of us too,” he said, radiating a big smile.

Up walked a doubtful boy, not fully sure of himself and the climb ahead of him, and down came a reassured and a bit more confident young man. We celebrated summiting the rock with shaved ice cones at the base.

Sweaty and hungry after the climb, we stopped for a quick shower at our treehouse and went out for lunch at Tubby’s Ice House. Tacos, chicken fingers, and french fries later our hunger settled.

A change of heart

While at lunch, he had caught a glimpse of the Museum of Pacific War across the street and said that he wanted to go there.

I didn’t think a museum would hold the interest of an 8-year-old boy. But lo and behold was I happy to be wrong.

The real warplanes on display, watching videos of how WWII came to be, what led to the victory of allied forces, all quenched his eager curiosity, and he had fun.

After the museum, we strolled into an art gallery across the street for a quick run-through (at least as quick as an 8- year-old’s attention can be held by pretty flowers in a frame) and then stopped for frozen yogurt to cool off some. Walking out of the place, my son caught me off-guard when he said –

“You’re right mamma. This place has its own charm. I am going to miss Fredericksburg. Can we come back here again, maybe next year?” he said.

“Yes, let’s see what we can do,” I said. “The important thing is that we never stop exploring. The world has so much to offer.

When we go to see places, it opens up our world in a way that staying at home cannot,” I said.

Perhaps the life betterment through change that the fortune cookie was referring to, wasn’t anything drastic after all.

And at times, a simple road trip with an openness to exploration, discovery and learning is all that is needed. 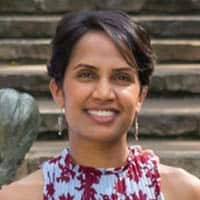 Sahana Sharan has a passion for travel writing that is infused with heart, inspiration, and information. When sprinkled with a bit of humor, all the better. A first-generation immigrant of Indian origin, and a physician by training, she is ever curious about the world around her and the people in it. Travel is her soul tonic. She lives in Plano, Texas. Visit her website.