Fulton, MO, is a Hidden Jewel of World History

We often hear about the #1 tourist destinations when we travel, but what about those hidden gems no one talks about—the ones that fall through the cracks?

I love learning about people and places when I travel—locations that surprise me and teach me something I did not know. I have found one of those gems in, of all places, Fulton, Missouri.

When Missouri comes to mind, first thoughts often revolve around college football, barbecue, and Budweiser.  Not a 900-year-old Christopher Wren Church, the Berlin Wall, and a National Churchill Museum.

With a population of about 13,000, Fulton is the largest city in and the county seat of Callaway County.  Presidents to Prime Ministers have journeyed to this little town.  Britain’s two-time prime minister, Winston Churchill, came to Fulton in 1946, leaving an indelible impression.

Fulton has secured a unique place in history as the birthplace and end of the Cold War, stamping its prominence in the annals of modern history.

Truman and Churchill in Fulton

Westminster College was founded in 1851 as a men’s private liberal arts college. The college established the Green Foundation Lecture series in 1936 for “individuals of international reputation” to promote an understanding of economic and social issues of global interest. They searched for a suitable candidate to participate in the 1946 Green Lecture, boldly reaching out to invite Winston Churchill. 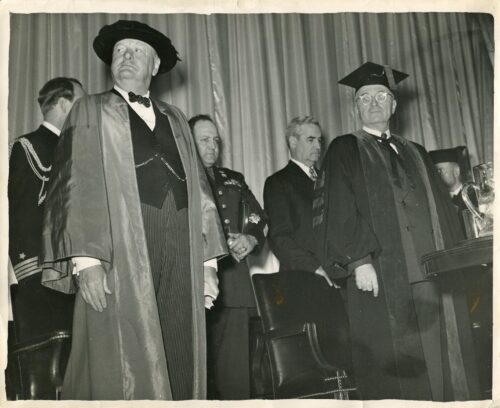 Churchill was feeling a bit of a letdown following a humiliating defeat in the 1945 British General Election.

This larger-than-life character who had risen to such heights and helped lead the Allies to victory against Germany was now out of the limelight.

At this moment, he received the invitation to speak at the Westminster College lecture series in tiny Fulton, Missouri.

What were the chances that this legendary statesman would have even responded to such an invitation? Not much you say.

]And you may be right if it weren’t for a handwritten postscript by Churchill’s dear friend from Missouri – Harry S (fun fact – there is no period after the S because he didn’t actually have a middle name – it was just S) Truman.

President Truman added a personal plea, “This is a wonderful school in my home state; hope you can do it; I’ll introduce you.”

The postscript served its purpose.  Winston did accept the invitation to deliver the College’s lecture.  On arriving in Fulton, Churchill rode in a parade with Truman waving to more than 25,000 people lining the route. In the open car with cigar alight, he flashed the famous V-sign to cheering crowds.

He was introduced by Truman to 2,700 persons packed into the college gymnasium. In his “Sinews of Peace” speech, which became widely known as the “Iron Curtain” speech, he foretold the omnipresent threat presented by Russia and its domination of Eastern Europe.  Churchill’s comments made international news.

Why erect a museum to Churchill in Fulton?  Westminster College is where Churchill delivered his famous speech on March 5, 1946, with a message heard around the world that went down in history as the “Iron Curtain Speech.”   According to some historians, the celebrated speech effectively predicted the Cold War.

Housed in the lower level of the historic Christopher Wren-designed church, it tells the story of Churchill, his global leadership, and the massive world changes that occurred during his lifetime. The interactive museum highlights his career in the face of war. It introduces a new generation of young people to one of the 20th century’s most significant figures. Through exhibits and films, the museum chronicles a most remarkable life.

Tim Riley, the Director and Curator of America’s National Churchill Museum,  gave us an excellent tour through the Museum, bringing the events to life, as he shared some thoughts.

What do you think the importance of the Churchill “Sinews of Peace” Speech is to World History? 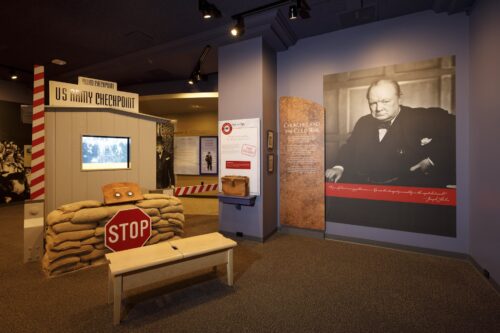 Put simply, Churchill’s “Sinews of Peace” changed the world. He stressed the importance of the alliance or “special relationship” between Great Britain and the United States, kindred nations with a common belief that freedom and democracy should prevail over tyranny and war.

The speech became a blueprint for how the west would wage, and ultimately win, the Cold War.

How does the Museum help visitors understand the life of Winston Churchill?

America’s National Churchill Museum exhibits original objects—speeches, documents, letters, and other artifacts—with quality technology and interactive displays to allow visitors to experience history in a fresh, relevant way. History does not seem old at the Museum. Visitors respond well to that.

What do you think is the most impactful part of the Museum?

The sum of the component parts of the Museum—the collection, narrative, and interactive displays, capped by the Christopher Wren church and Breakthrough sculpture made from the Berlin Wall—add up to an extraordinary visitor experience. There are few, if any, museums like it.

How did President Truman convince Churchill to speak in Fulton?

Without Harry Truman’s handwritten note penned on the bottom of the letter from Westminster College, I doubt Churchill would have accepted the invitation to speak.

After winning the Second World War, then losing an election (and his seat as Prime Minister), Churchill wanted and needed the spotlight on the world stage that the President of the United States would command. Churchill knew it—and made the most of the opportunity.

There are great stories in every stone in this Church. The Church of St. Mary the Virgin, Aldermanbury, is a 12th-century English church that once stood in the center of London.

It was destroyed by the Great Fire of London in 1666 and rebuilt by Christopher Wren in 1676.   Then, Nazi bombs gutted it during the 1940 Blitz of World War II—leaving only the outer walls and bell tower.

The Church remained in ruins until the 1960s when the 900-year-old Church that rose from the ashes twice found a new home in Fulton that’s inextricably linked to Winston Churchill. (NOTE: the church was purchased by Westminster College and moved to Fulton from London with the sole purpose to be the home of the Churchill Museum.)

It was dismantled and shipped to Fulton, painstakingly moved stone by stone from London, and reassembled. It was reconstructed on Westminster’s campus and dedicated in 1969.

The college raised $2 million to relocate and rebuild what remained of the London Church.  Today, it serves as the college’s chapel. A spiral staircase connects it to the Churchill Museum.

It is the only building in the United States designed by renowned English architect Sir Christopher Wren, combining elements of Renaissance Classical and Wren’s own English Baroque style.

Westminster College trustees believed rebuilding and revitalizing the Wren church was an appropriate tribute to Churchill and his speech.  Together they showcase the town’s unique links to Britain.

Breakthrough is the work of artist Edwina Sandys, granddaughter of Winston Churchill.

The sculpture stands in the foreground of the college’s National Churchill Museum and Library, serving as a monument to the years when it served as a physical division between communism and democracy.

One year after the fall of the Berlin Wall, Sandys proposed placing a piece of the Wall at the Westminster College campus, a fitting tribute to her famous grandfather.

It consists of eight sections of the Berlin Wall, the longest continuous section of the Berlin wall in North America, commemorating the collapse of the Iron Curtain and the end of the Cold War.  It was dedicated in 1990 by former President Ronald Reagan.

A Historical Accommodation with Notable Guests

The Loganberry Inn Bed and Breakfast is just one more hidden treasure in Fulton.  The grand Victorian house was built in 1899 and is within walking distance from the Churchill Museum.  When you enter, you feel like you’re stepping back in time, with photographs of famous visitors that you wouldn’t expect anywhere else.

There is a long guest list of dignitaries who have stayed at the Loganberry Inn. Former British Prime Minister Margaret Thatcher spent two nights during her 1996 visit to Fulton when she spoke at Westminster College. The room in which Thatcher stayed looks much the same today, decorated in shades of cream, pink, and maroon.

When my husband and I visited, we stayed in the Presidential Suite where Lech Walesa slept.  Did I feel the ghosts of other notable guests? No, my dreams were untroubled, but I can confirm that the breakfast in the beautifully appointed dining room was delicious.

Fulton has a small-town feel and is loaded with history and charm.

Fulton boasts more than 90 buildings on the National Register of Historic Places. The city has preserved and rebuilt its historic Brick District. This main thoroughfare features brick streets and vintage buildings that house various shops and restaurants, including Cuban-style lunches at the Fulton Cafe and the upscale foodie experience at Beks gastropub and steakhouse.

It’s also home to several festivals, including the Morels and Microbrews Festival held in May.

Helen Stephens is the most well-known athlete in Fulton’s history. Yet very few people outside Missouri know her name.

Called the Fulton Flash, Stephens won nine amateurs Athletic Union track and field titles as a teenager. She became a member of the 1936 United States Olympic Team that went to the Games in Berlin.

At only 18 years old, Stephens won two gold medals, setting a record in the 100-meter race that stood for 24 years.  She did this many years before schools had athletic programs for girls.

Famous African American sprinter and long jumper Jesse Owens was her friend and teammate. After the Olympics, Stephens returned to Fulton, earning a college degree from William Woods University.

A destination’s true beauty lies in its history.  Venturing off-track liberates genuine travelers.   Sometimes, an area’s greatest treasures are the ones most overlooked. I hope you don’t let Fulton fall through the cracks.