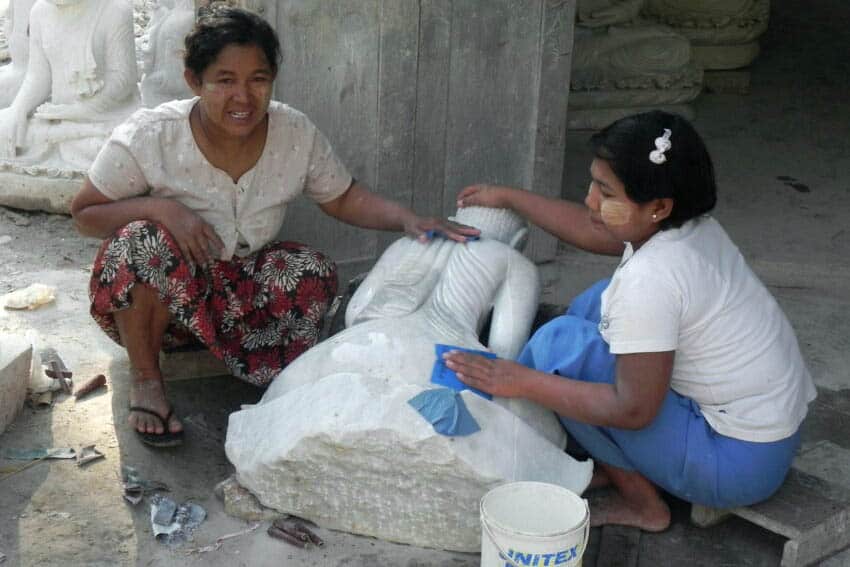 The name “Mandalay” has always conjured up intrigue in exotic locales for me, maybe from seeing the Bob Hope–Bing Crosby Road to Mandalay movie as a child.

In 2012 the city was peaceful but, walking down the street in the marble-carving district, I experienced “exotic” without a single dastardly plot as in the film.

As I ambled along, I kicked up the powdery white substance that covered every surface. For someone glancing at a photo, the sea of white might easily be mistaken for a dusting of snow.

But in Burma, it surely wasn’t snow. The fine particles mixed with sweat to form a paste on my skin, my lungs struggled to take in air, and the substance seemed more sinister than a mere movie villain.

This one street, maybe six or seven blocks long, supplies all of Burma, plus a large swath of China, Thailand, and other Southeast Asian countries with an endless army of marble Buddhas.

Workers create small Buddhas, towering Buddhas, thin ones, fat ones, smiling, somber, pure white, and painted ones. Lining the road were small workshops, each crammed with sculptures, some in process, others completed and presumably awaiting shipment.

Many statues stood in neat rows, looking like the terra cotta warriors that protect the emperor’s tomb in Xi’an, China. Others lay jumbled as if tossed there like pick-up sticks. A few random horses, dragons, dancing women, and other fanciful creatures kept the Buddhas company.

Both sides of the narrow street buzzed with activity while buses, cars, and motorcycles sped between them, each stirring up a cloud of white particles. Tourists wandered through work areas, picking their way around workers and trying not to get hit by a vehicle or twist an ankle on the uneven surface of marble debris. Using power saws, Dremels for fine carving, grinders, and sanders, workers hunched over bulky blocks of marble or semi-finished forms.

Women washed and hand polished nearly completed figures, the newly clean surfaces glinting in the filtered sunshine. Tools screeched, radios played, people called out to each other. Truck and bus motors added to the cacophony. It seemed a brutal setting for the creation of spiritual icons.

Using my camera as a way to focus myself, I homed in on small scenes within the chaotic activity.

Two women squat next to a reclining Buddha, intently scrubbing his back. Dusted in white, their appearance is ghostlike, ethereal.

Their full attention is on the task, their hands smoothing and buﬃng the surface. They couldn’t have been gentler or more reverential. A pair of angels, perhaps. They are surrounded by a dozen or more identical statues, each awaiting its turn.

I wondered if being Buddhist gave these women patience and instilled meaning in this repetitive, dull task.

Across the road was a small temporary storage area. I was enthralled and took endless photos of rows and rows of seated Buddhas, their bodies fully carved but faceless. Instead of a gentle smile and soulful eyes, their heads are formless blocks of roughened stone.

In the guidebook, I’d read a long explanation of how the master marks the outline on the large block of stone and makes the first cut after prayers have been chanted and solemn rituals performed— everything done ritualistically to ensure pure energy and auspicious life.

Apprentices make rough cuts while the master looks on and advises. The master does the final, fine shaping. I see none of this, but perhaps I am there at the wrong hour of the day or don’t know where to look.

I had always assumed that the Buddhas I’d seen in pagodas had been carved by artists, my frame of reference being Michelangelo and the Pietà. I imagined years, maybe even decades, of apprenticeship with a master to learn techniques and acquire an understanding of proportion and grace.

Then a single artist would spend months carving a perfect Buddha, the end result in a personal creation. Instead, this appears to be an assembly line, with each person assigned to a different body part.

Perhaps the face alone is reserved for the most skilled craftspeople. So, are the makers of these figures gifted sculptors or merely skilled workers?

A short distance down the road, I photographed a young man power-grinding flowing folds into Lord Buddha’s robes. I know he’s young because of the baseball cap turned backward on his head and the jeans he wears.

The older generation dresses more traditionally. But his hair, covered in marble dust, looks prematurely gray. His face, arms, shirt, and jeans seem to have had all color bleached out.

He is, of course, simply covered in dust from the piece he’s working on. He wears no respirator or face mask; no one I see working does. I imagine his lungs must be white too, and I don’t suppose he’ll live a long life. In fact, as I move further up the street, I don’t see anyone who looks to be much older than their mid-to-late thirties. Who knew that sculpting could be more dangerous than coal mining?

Set back from the work areas are shops, each salesroom dis-playing a slightly different variety of figures. In one I take photos of Buddhas with ruby-red lips and what appears to be a splash of eye shadow and rouge. Some of their carved robes are edged in gold, and others are adorned with a golden sash. My guide sees me looking and tells me these sculptures are bound for China. He points out the chubbier cheeks, fuller lips, and hair design. No one in Burma, he tells me, likes that style—it’s too ornate.

In front of another shop, I quickly snap a photo of a young man, perhaps the salesman or the owner’s son, sitting on a folding chair next to a Buddha for sale. He could easily have been the model. His passive, plump face, staring into space echoes Lord Buddha’s calm countenance. On the young man’s face, it could be total peace . . . or boredom.

He’s got large ears, eyebrows high and arched, and neatly shaped hair; they all mimic the style of the statue. A white T-shirt, loosely covering his ample belly, has a row of soft folds that could have been carved by one of the craftsmen I’d just observed.

After thirty minutes and less than half the district, I’ve seen more Buddhas than I’d seen in my entire life, and I’ve traveled extensively in Buddhist countries. Who buys all these? They aren’t tourist trinkets. This walk has given me much to think about. Where do all of the Christ figures in American churches originate?

How much do they cost? Does the serenity of a Pietà also emerge from a chaotic workplace? I cannot stop wondering.

“Exotic” is defined as “of foreign origin or character” or “strikingly unusual or strange in effect or appearance.” The sea of white and all who work in it, birthing an army of Buddhas, was about as exotic a sight as I’ve ever come across.

Karen Gershowitz, author of Travel Mania: Stories of Wanderlust, has been traveling since age 17 when she boarded a plane to Europe and stayed there for three years. She has since traveled to more than 90 countries, experiencing countless bold, once-in-a-lifetime adventures: climbing Mount Kilimanjaro, trekking atop an elephant in Thailand, hiking in the blistering heat of the Moroccan desert—and much more.  She lives in New York City but is a citizen of the world.