Egyptian cuisine is produced from the melting pot of the Middle East, North Africa and the Mediterranean. It is varied and fascinating, but it only takes one day in Cairo to cover the basics. Here’s how.

Felfela has been a fixture on the tourist circuit in Cairo for not just years, but generations. A haven for those perhaps intimidated by the less polished eateries of the city, but still offering something of an Egyptian flavor, it has been a firm favorite for many.

There are those who will tell you it’s past its prime and, who knows, they may have a point, but its takeaway branch aimed at the locals, around the corner on Talaat Harb Street, is very definitely going strong.

I like to go for breakfast, sometimes tucking into it there and then, standing along the walls where pedestals have been placed for the purpose, otherwise returning with it to the hotel if I am staying nearby. As long as the doors are open, this place is busy.

It is the quintessential Egyptian breakfast, more earthy and hearty than hummus, a better comparison being refried beans, but with a unique and not unpleasant bitterness. K hates it instantly. I can’t get enough. Instead, she has ta’amiya, the local equivalent of felafel, but greener, moister and well, better.

Koshary is all wrong.

Served as fast food and pretty much Egypt’s national dish it consists, bizarrely, of rice, macaroni, and lentils. That’s right, you heard me. You wouldn’t credit it, would you?

The sprinkling of a few fried onion flakes over the top with some chickpeas thrown in seems like a desultory effort at injecting a bit of flavor into this carb-fest; a little tomato sauce served on the side unlikely to elevate the whole stodgy mess to the status of a decent meal. Insulting, almost.

Until that is, you take a mouthful. At which point what looked so wrong tastes… oh so right. There is alchemy at work here.

It might be the Cairo air, thick with pollution, or perhaps the fluid, expert motion of the koshary men as they flick their metal bowls, combining the ingredients in the flash of an eye, almost unconsciously; their muscle-memory doing the work.

Whatever the extra ingredient, koshary is an extraordinary dish. The word originates in the Hindi kishri, meaning ‘an unlikely mix’. It commands devotion, allegiance, and loyalty; Cairo’s outlets compete fiercely, and regulars are just as fierce in the defense of their preferred venue.

Many are the devotees of Abou Tarek – today, the hijab is a source of fascination for us there as we watch a young woman struggling to eat her koshary through it – but there are those who will swear by Koshary El-Tahrir near Tahrir square.

Often overlooked, in the Bab El Louk district, is a place called Lux where I had my first encounter with this staple. They have a few other branches around town.

When you sit down with your bowl, there will be a couple of dressing bottles on your table. The contents of one will be hot. The other will be a pungent mix of garlic, vinegar, and lemon. Both will be unexpectedly delicious.

My ‘top ten things to do in Cairo’ list is evolving, but predictable choices such as the National Museum and the pyramids lost their slots years ago to experiences like taking a taxi ride (anywhere, just try it) and eating koshary.

It’s all wrong I tell you.

Egypt, the land of pharaohs, pyramids, and pizza.

Well, almost. The fiteer is Egypt’s version of the slightly better known Italian topped flatbread. Like its cousin, it is street food, served in any number of down to earth places throughout the city.

Unlike pizza, it’s made from lighter, flaky pastry and is usually stuffed rather than topped, though I’ve seen it both ways.

We are in Fatatri near Tahrir Square, a long-standing fiteer place. It’s our first evening in the city this time around and I’ve dropped K in at the deep end, the place a dusty and a rather grimy version of what it once was as the ubiquitous street cats circle our ankles for crumbs.

We are the only customers, not quite outnumbered by the two staff. They have a wall-mounted television on at full volume, Koranic readings thundering through the tiny restaurant. Something tells me I won’t be having any wine with my dinner. I don’t even ask, settling for a Fanta.

I have to hand it to them though, the fiteer is tasty, topped with spiced lamb and white cheese. These pancakes are as popular sweet as they are savory, filled with powder sugar, honey, nuts or coconut among a myriad of other options.

Still, I could have done with a drink.

Later, with that in mind, we find ourselves in the Al Houria cafe in the Bab El Louk area again, just across from Lux. This place, you might say, has seen better days.

It’s one of those huge, echoing spaces, old-fashioned fans wobbling from the high ceilings; the 19th-century acoustics produce a clattering din. If anyone has approached the cafe with a tin of paint over the last fifty years they have evidently been turned away.

Tonight Al Houria is crowded. We look around for a spare table to no avail, the waiter helping us out by planting two rickety chairs at the end of one already occupied. Two bottles of Egyptian beer are plonked between us.

Nobody has asked us what we want – it’s a given. It isn’t everywhere in Cairo you’ll be served beer and that’s why people come here. If you turn to the left when you come through the door it’s coffee, tea, dominoes, and chess. If you turn right, it’s beer.

You might say it has seen better days, but you’d be wrong; the place is still an institution in Cairo, a meeting place for those on the political left, ex-pats and the less conservative elements of Egyptian society. Cairenes don’t seem to care about chipped paint. We find ourselves sharing a table with Hassan and Abdul. They are in “shipping” and that’s as much detail as I’ll be getting on that.

End of day one. We have eaten well on the unpretentious food this city offers, and by sticking to the places where locals eat we have had a good taste of Cairo’s street life as well, its daily rhythms, and its people.

Abdul gestures to a lady wearing the hijab at a distant table, soft drinks in front of her and her male and female companions.

“You know, before, you never see this. No women in this place, never. Now, everything is mixed. A shame, really a shame”.

K is sitting right there.

K is sitting right there.

“So do I!” he declares emphatically, breaking into a belly laugh.

Felfela, 15 Shara Hoda Sharaawi, Downtown, Cairo, 02/392-2833
These days Felfela has more than one branch but this is the original and the takeaway version is just around the corner on Talaat Harb St.

Abou Tarek, No.16 on the corner of Maarouf and Shambliuan (Champlion), downtown. 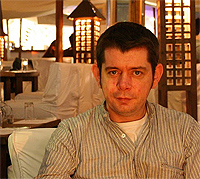 Robin Graham is a freelance writer and photographer living in Dublin, Ireland. He has traveled extensively in Europe, Africa, the US and the Middle East. He and his fiancee, K, divide their time between Dublin, Bavaria, and southern Spain.