The country of Taiwan is home to incredible cities, coasts, and natural sites you could traverse in a week. Yet, there is an island often overlooked: Kinmen Island.

Even I didn’t know about it until I was offered a job on this rarely talked about hemp and cactus covered-destination.

Located just off the coast of China, you can easily see the cloud-grazing buildings and mountains of China’s Fujian province.

Kinmen is different than the rest of Taiwan not just because of its isolated location, but due to its history and proximity to China. The culture is unique as it’s a part of Taiwan, yet maintains strong cultural ties to China.

And unlike Mainland Taiwan, which was occupied and influenced by the Japanese for 50 years, Japan only held power in Kinmen for eight years, leaving little cultural influence.

Kinmen’s location and history played an invaluable role in the story and development of Taiwan.

As one of Taiwan’s final battlegrounds in the Chinese Civil War, historical war museums dot the island and abandoned military sites are easy to stumble upon.

A “stumbleupon” moment I’ll never forget was the abandoned morgue I found in the middle of the mountains.

Beyond the intriguing history and culture, the nature on Kinmen is worth the while to experience. With hiking trails, calming beaches, and diverse wildlife, discovering the beauty is as simple as hopping on a bike or scooter and turning down whichever street piques your interest.

Just make sure to heed any silkworms that may be hanging from overhead trees — seriously, I was almost run off the road by one of these little buggers.

The best time of year to visit is in the Spring (March to May) or the Fall (October to mid-December), which are peak travel times across Taiwan. It’s best to avoid visiting Kinmen over the summer (June to September), as it’s typhoon season and travel disruptions are possible.

Getting to Kinmen Island

From the main island of Taiwan, flights depart to Kinmen from the cities of Taipei, Taichung, Tainan, and Kaohsiung. Flight tickets from Mandarin Airlines or Uni Air cost between $2,600-$3,500 NTD (~$85-$120 USD) for a round trip.

Although there are no flights from China, there is a ferry that travels out of Xiamen, China to Kinmen. The travel time is about 1 hour and costs 140 RMB (~$20 USD).

While taxis aren’t a cost-effective way to travel the island, they’re convenient transportation to and from the airport. Taxis are available around the island and are especially abundant in towns like Shanwei, Jincheng, and Jinsha.

Buses are a cost-effective way to travel the island, costing 12 NTD (~.50 USD) per ride.

While the Mandarin schedules at the bus station may be difficult to understand, if you have internet access on your phone you can plan routes through the Kinmen Transportation Website.

The website, which works in English and Mandarin, allows you to enter your location and destination. The system will generate the correct route for you to take. Buses typically run between 6 AM and 8:30 PM.

There are also daily tour buses that start from major bus stations in Shanwei and Jincheng, bringing visitors to popular attractions. You can find more details on these tours below in the tours section. 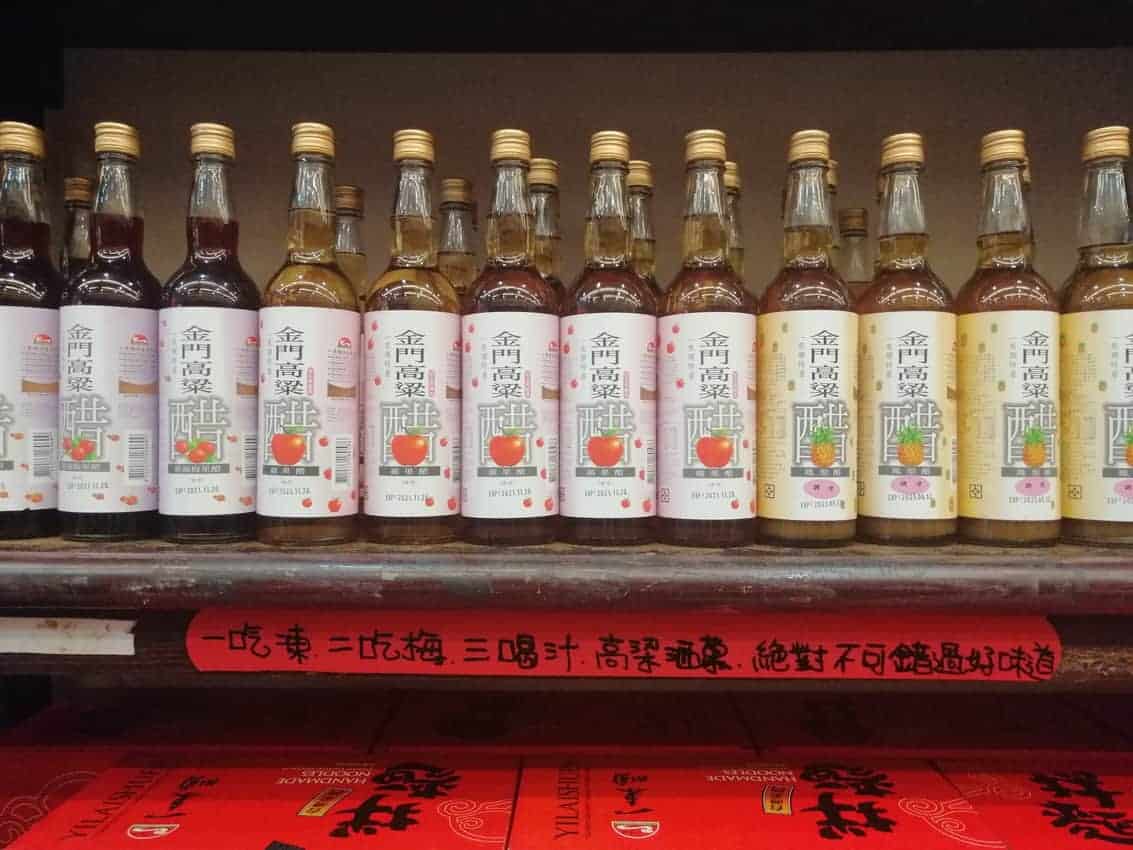 Because gas-scooters are exclusively for Taiwan driver license holders, expect to be offered an electric scooter to explore the island.

Klook offers rentals by the day and if you have little baggage, they can bring your scooter to the airport when you arrive.

Car rentals are also available with Klook and are great if you’re traveling with kids, but renters must provide a driver’s license and an international driving permit to rent.

There are two ways to rent bikes on Kinmen; from the public bike system or from a bike rental store.

The K-Bike public bike system is the cheaper option, but not ideal for traveling across the island as they are heavy and difficult to ride up hilly areas. Trust me, I’ve tried.

If you’re simply looking to bike around town, then they are an excellent option. To access the K-Bike system you’ll need a Taiwanese phone number to register.

If you’d like to bike around the entire island, a few bike rental shops in Jincheng offer rentals from $300 NTD (~$10 USD) a day. The bikes are of higher quality and more suitable for traveling long distances around the island.

Of all the transportation options, a daily bike rental is affordable (& fun!) way to travel the island.

Kinmen is loaded with natural, historical, and military attractions. The best part is the majority of the attractions are free!

I have visited many of the attractions around Kinmen listed below and have yet to pay anything.

The Chen-Jing Ian Western-style House is a dedicated museum that showcases the history of immigration and family life on Kinmen before the war.

Across Kinmen, you’ll see Western-style buildings that were constructed from the money of Kinmanese who left to work abroad in countries like Singapore.

Although there are many Western-style houses across the island, this one serves as a museum and pays homage to those who built Kinmen. website

Kinmen Island is full of Fujian-style buildings from the early 1900s and often, families still live in them.

In the historic village of Shantou, you can tour the best-preserved Fujian-style homes of Kinmen and learn about the history and traditions of village life. Oh yes, and you try some local delicacies such as the oyster omelet.

The Taiwu Mountain Trail is the most popular and established hiking trail on Taiwu Mountain. Open from 9-5 PM Sunday through Saturday, a walk up Taiwu mountain will lead you to Haiin Temple, one of the top religious sites on Kinmen Island.

The views from Taiwu Mountain are breathtaking as you can see deep into the mountain forests, across the ocean to China, and the vast lands of Kinmen Island.

On Kinmen, it’s easy to access a beach from anywhere, but be aware that most beaches are not swimmer friendly.

Many beaches are lined with anti-landing barriers that were designed to deter ships from landing on Kinmen during war times.

If you’re interested in enjoying a dip in the ocean, Oucuo Beach is designated for fun in the water.

photo title: Anti-landing Barrier Kinmen (Caption: Anti-landing barriers made out of railroad tracks speckle Kinmen’s beaches. In the distance you can see the mountains of China.)

In honor of the 1949 battle that raged on for three days, the Gunington Battle Museum display tells the story of when Taiwan defeated the Chinese army along the beaches of Kinmen.

Inside the museum, the walls are lined with massive paintings that depict the story of the battle, from beginning to end. War regalia used during the war such as guns and tanks are also on display.

The museum is a reminder of the freedom Taiwan fought for and the military servicemen who fought for the people of Taiwan.

As Kinmen is an island made up of granite rock, the tunnel leads from the island interior out into the ocean.

Located in Jincheng, the tunnels are a popular tourist destination. Due to the incredible acoustics, a yearly music festival occurs every October in these tunnels.

If you’re really keen on seeing specific sights on a tight timeline, you can take either a bus or taxi tour.

The bus tours offer different sightseeing opportunities to visit military sites, historical sites, and of course, all of the island’s endeared Wind Lions.

The bus tours are in Chinese, but if you are visiting museums on the tour, you can expect to have English signage to guide you through the museum.

Taxi tours are also available in both half and full-day tours but come at a higher cost than the bus tours.

Once again, these tours are in Mandarin but the sites you visit will have English signs available. For taxi tour information, go here.

The food on Kinmen is as unique as its history and culture. Fried-dumplings are basted in egg, famous beef noodles are products of local farming, and peanut and taro products reign as popular gifts to bring home.

And of course, you have to try one of the most famous Taiwanese sorghum liquors produced right on the island, Kaoliang. The two dishes below are must-tries when visiting Kinmen.

Guangdong congee is a robust breakfast dish on Kinmen. It’s a rice porridge often topped with meats, vegetables, and green onions. Order it with a Yóutiáo (fried breadstick), and you’re set for a traditional Kinmanese breakfast.

Beef noodles are a popular dish throughout Taiwan, but the beef noodles on Kinmen have their own reputation as they come from locally-raised cows. If you enjoy beef noodles and visit Kinmen, be sure to try them. Served commonly at restaurants, you’ll never run out of local beef noodles to survey.

Across towns in Kinmen are stores that sell Kinmen specialties such as beef jerky, peanut snacks, mini-wind lion statues, and Kaoliang, the famous Kinmen liquor.

There’s no shortage of these shops as you’ll find many located in towns such as Shanwei, Jincheng, and Jinsha.

Very few people speak English in Kinmen, so be prepared with an app such as Google Translate. The photo translator will be a savior when visiting local restaurants.

Although it’s not known as a tourist destination, the Kinmen Agricultural Research Center is the coolest free zoo you’ll ever wander. It’s open to walk around and view interesting wildlife such as black-and-white chickens, ostriches, and deer. An ostrich even performed a mating dance for me upon our first encounter.

Because of Kinmen’s military history and military presence, there are some areas you cannot photograph. Often there are signs around military areas that prohibit taking photos. If you spot an area that looks like it may be under military control and there are signs,  use your Google Translate camera app to read the sign and make sure before taking pictures.

Military restrictions also extend to certain paths. When biking or riding a scooter, if you are tempted to go down a small path, be sure there are no signs outside the entrance.

Once again, they’ll be in Chinese, but they’re usually obvious warning signs as they are large and red. Use your translator app to check and if you still aren’t certain, don’t go. Some paths may still have active artillery and mines underground.

If you plan to bike or scooter around, utilize Google Maps to help you find hiking trails, museums, and of course, find your way home after a day of exploring.

Avoid flying drones for photos and videos around Kinmen as planes fly low over the island to land.

Peacocks are an invasive species on Kinmen. Spot them if you can. 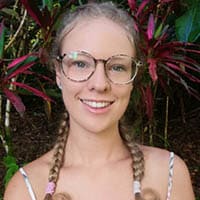 Kayla Marie is an English teacher based in Taiwan. When she’s not teaching, she’s creating YouTube videos, spreading awareness about life in Taiwan, and practicing Mandarin.