Las Vegas: “I Never Thought I Would Live Here!”

Las Vegas, the City with a Thousand Stories: Here are Fifty

“If there is a book that you want to read but it hasn’t been written yet, you must be the one to write it.”  -Toni Morrison

In the early years of living in Las Vegas, I was thrilled to see such diversification in people. I was raised on Long Island, New York, and spent the first 50 years of my life there: as a student, young bride, mother, and teacher as did almost all of my friends and acquaintances.

So after we moved here, when I listened to people’s stories about how and why they came to live in Las Vegas, the reasons were varied, as you will see. However, the tag line was always the same, “I never thought I would live here!”

After hearing this common ending to almost every story, I decided that there was a book to be written about this very idea, and many stories to be told. So before anyone else ran with my idea, I would be the one to do it!

I too never would have believed that I’d end up living in Las Vegas-based on my misconception of what this city really was about. People I interviewed talked about the great weather, access to beautiful natural parks, great food, and world-class entertainment. Few indicated that gambling was the stimulus that brought them here to live contrary to the city’s reputation.

From Nebraska to Las Vegas

Carhenge is a replica of England’s Stonehenge located near the city of Alliance, Nebraska, in the High Plains region of the United States. Instead of being built with large standing stones, as is the case with the original Stonehenge, Carhenge is formed from vintage American automobiles, all covered with gray spray paint.

Built by Jim Reinders, it was dedicated on the June 1987 summer solstice. In 2006, a visitor center was constructed to serve the site.  -Wikipedia

Steve and Judy lived in Omaha, Nebraska for over forty-five years before relocating to Las Vegas over twenty years ago. Steve and his family owned a wholesale produce business, then for several years, he owned a “Dollar Rent a Car” franchise.

Judy’s parents owned a luggage store where she worked to help them out. She was a “stay at home” mom until she went back to college at thirty-nine to get a secondary teaching degree and taught in Omaha for two years before moving to Las Vegas.

They came to Las Vegas twice on vacation: once in1974 and then again in 1984. They thought it was a fascinating city but Judy said to Steve, “It’s fun to visit, but why would anybody want to live here?”

Yet, they moved here as many do for jobs. Steve had an opportunity to work for a food wholesaler here when his family sold the business in Nebraska. In addition, Clark County School District was hiring massive numbers of teachers, many from out of state.

The economy played a significant role also, buying a home at a reasonable price with low property taxes, and no state tax incentivized them as well. As most have said before them, it was hard to leave family behind, but they viewed it as an adventure. They were typical Midwesterners, never having lived anyplace else.

They found it difficult to make new friends and were disappointed in the lack of friendly services, pride, and work ethic here. In her words, “It took transitioning her brain from Midwestern thinking to Las Vegas thinking by learning to go with the flow; it was quite an adjustment.”

Big turning points in enjoying Las Vegas were their home in a neighborhood which they loved, a teaching position which she enjoyed for many years, membership in a health club, and finding pets to love. They made meaningful relationships with other couples and the weather in spring, fall, and winter was captivating, a nice change from the harsh Nebraska winters.

Steve loves to meet and talk to people. He is usually up to speed on all the news in Omaha and keeps up with many of his old friends as well as family in Nebraska. They have made us aware of all the good people and traditions coming out of Omaha and Johnny Carson and Warren Buffet, just to name two famous people.

However, he has been fortunate in meeting well-known people in Las Vegas. He regaled me with stories of people he spoke to in Las Vegas whom he never would have met in Omaha! Here are a few tales:

-Steve met Tony Curtis while selling cars. He greeted Tony with, “Hello, Bernie Schwartz!” Tony was so surprised that he responded, “Nobody has called me that in years!”

-Steve sold a car to Dean Martin’s daughter. She said, “You might know of my father, Dean Martin.”

-He saw David Brenner walking in town, Jon Voight at an IHOP, Matt LeBlanc at the Rio, and Rod Stewart at “In and Out Burger”.

While walking his dog in Desert Shores, he ran into Mike Tyson who was jogging with a friend. Mike stopped and asked if he could pet his dog, and commented that Kobe was a beautiful animal.

Steve is clearly a “magnet to the stars!”

From New York City to Vegas 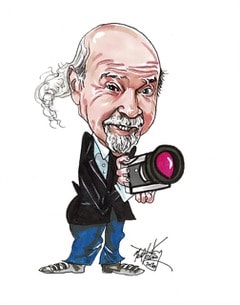 Ed used to sing when he served in the Air Force National Guard. It was there that he met Mel, who was a comedian who later went on to perform on The Arthur Godfrey Show in the 1950s. Ed and Mel lost touch then but re-connected many years later.

Ed and Julia had been to Vegas in 1950 and 1958 (when there wasn’t much to see) and then again in 1988.  This time in 1991 it was a different city! Ed asked his wife what she thought about relocating from Long Island to Las Vegas, and before the sentence was out of his mouth, Julia said yes. The fact that she loved to gamble, and they both had enough of New York winters facilitated their decision.

When Ed lived in New York, he introduced desk-top computers and word processors to the Hewlett Public School District, where he worked for 26 years. After he retired,  he said, “It took four people to replace me!”

A sculptor and teacher of art and photography, Ed spends much of his time photographing and enjoying talented singers and performers in Las Vegas. “This feeds my love of music and my craft of photography at the same time,”  says Ed. He also spends time back in New York visiting his son David and his three grandsons who all have inherited his creativity in one form or another.

In addition, since he moved here he has done photography for realtors and staging companies which helped him initially learn all about the Las Vegas Valley which he truly loves. These are opportunities here, by his own admission that he would not have had if he stayed in New York.

His art and creativity have grown and developed during the twenty-five years Ed has lived here. In addition, this photographer is an accepted member of the “entertainment community” through his amazing photography. Seen at many openings, events, concerts, and shows, Ed carries his camera all over, because he never knows when that perfect picture will appear for him.

Lynn Rosenberg (nee Goldstein) and her husband Ron have lived in Las Vegas for over 20 years. She grew up and lived in Long Island, New York. She attended State University at Cortland in upstate New York where she majored in elementary education and Hofstra University where she earned two master’s degrees: one in Reading and one in Administration.

She pretty much followed the “mold” of what her friends on Long Island did: came back after college, married, had two children, and taught school. Life changed when she and her second husband (her first husband Gary died in 1985) moved to Las Vegas after frequently visiting her dad, who had relocated to Las Vegas for business.

In 1999, she was offered a job as an assistant principal which inspired the couple to leave New York for Las Vegas- a place far different from her roots.

Lynn’s career was spent in the field of education, as a teacher and then an administrator. It was all Lynn wanted to do from the time she was in fifth grade because of a wonderful teacher who inspired her to one day want to enter the profession.

While raising her two sons Jeffrey and David, Lynn taught the upper elementary grades and when the boys were ready for college, she decided it was time for more of a  challenge and earned a degree in administration. She believed that instead of reaching 25 students a year, she could inspire more children to be a principal.

Working as an assistant principal in several schools in Las Vegas, Lynn met many teachers who hailed from different places. The idea for this book developed because each person she met had an interesting story about how they came to live n Las Vegas. She collected questionnaires over a five year period, then upon her retirement decided it was time to write their stories.

She loves living in Las Vegas and enjoys exercising outdoors, playing tennis, biking, hiking Red Rock Canyon, and visiting her six grandchildren in Tennessee and California. The Rosenbergs have traveled extensively over the years to Hawaii, The Canadian Rockies, Alaska, Italy, Spain, France, Iceland, the national parks, and most recently Australia and New Zealand.

It is her hope that all her readers delight in these stories and not surprisingly, find themselves!