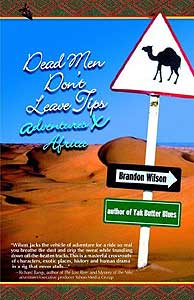 “If you tell people to live together; you tell them to quarrel.” ~African Proverb

What Does It Take to Follow Your Dream? Quite a bit, if your dream involves crossing Africa! That’s what Brandon and Cheryl Wilson discover when they set off on a seven-month, 10,000+ mile overland journey from Morocco to Cape Town. As dedicated independent travelers, they’d already traveled around the world. But was a trans-African odyssey too much, even for them?

They join an English do-it-yourself overland safari. Flung into the midst of twenty-one odd companions, they’re shocked to discover that many of them have never even camped before. And the “guides” know Africa as well as the dark side of the moon. After watching their dream turn into a nightmare, they eventually set off across Africa — alone.

In this excerpt, they visit Nigeria.

The road to Nigeria was fraught with delays. We wasted several days in Benin attempting to get truck insurance for Nigeria because it took a certain amount of greasing the right palms. However, crossing the border was another sobering test of patience. For two hours we nervously paced as our truck was checked and double-checked and passports were scrutinized. Finally, a bottle of whiskey traded hands and gates were flung open. The stakes had certainly increased since the old days when a beer or a cassette could bribe us through.

Nigeria stood in uneasy contrast to Benin. Everywhere we looked were hordes of people. Even smaller villages were huge in comparison. Nigeria was already the worlds seventh most populous country and it looked like half the nation was lining that pockmarked highway.

We headed directly to north toward Kano, skipping Lagos’s legendary crime, strangling pollution and stationary traffic. Sailing from one machine gun-toting military checkpoint to the next, we made great time winding our way back into the rain-starved Sahel. We were pleased to find that once outside the cautious reserve of the big city, back in a land of simple mud huts, we rediscovered the friendly curiosity made that made Africa so special.

As we passed one gracious lady gathering water at a well, she stopped pouring long enough to wave, then actually curtsied.

Arriving that afternoon in the metropolis of Kano, our never-ending search for the perfect campsite resumed. Unfortunately, Kano’s only site was as far from perfect as we’d seen. Surrounded by walls topped with broken shards of glass and barbed wire, it had all the charm of a concentration camp. There were toilets, but no water. Brimming with human excrement, they offered a constant feast for man-eating flies. The showers, splotch green and brown with years of mold and blood, were fife with mosquitoes and worked only an hour each day. They’d trickle on at eight in the morning for thirty minutes and then again at midnight. 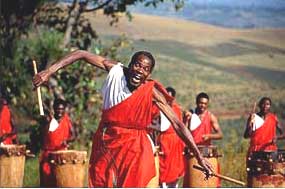 For one fleeting moment, we thought we might have a reprieve. Nigel suggested, “Hey, they have doubles at the Central Hotel next door for 150 naira. Why don’t you join us and we can all check in there?”

However, when he and Sprout, Henry and Maxie and Cheryl and I showed up, their price instantly doubled to over 300 naira. The hotel desk clerk unabashedly explained, “Oh, 150 naira is the ‘local’ rate.”

‘Local’ rate? We’d run into that before when buying food, clothes or souvenirs. Travelers could never hope to get the same price as locals in Africa unless the merchant was desperate for a sale. Still, I was surprised to hear that hotels played that game, too. We tried to reason with the functionaire.

“How’d you like it if you were charged a different price in Lagos than a person from Lagos?” I asked.

“I don’t go to Lagos,” he deadpanned.

It’s going to be tough to change his mind.

“Well, we paid 150 naira last year when we were here,” Nigel added.

“That was last year.” 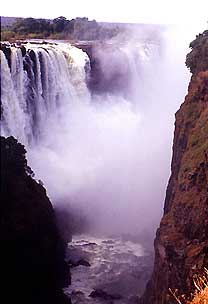 Henry demanded, “Prices have doubled since then?”

That was it. End of discussion. Unlike business owners, hotel clerks never care if you stay or not. Makes no difference to them. After a useless thirty-minute debate on the fairness of ‘tourist’ pricing with the inflexible clerk, Henry, Maxie, Cheryl and I felt like we were ‘beating a dead desk clerk’ and returned to the compound.

Nigel however cajoled and pleaded for the next four, finally wearing down the clerk’s patience to the point where he called the manager. Not wanting to deal with some sniveling, unshaven overlander in red leather boots, he eventually relented and gave him the room at the ‘local’ price. So Nigel and Sprout savored the next three days in the unrivaled luxury of an air-conditioned three-star hotel.

Meanwhile, the ‘real’ overlanders salivated at just the thought of ‘real’ cold showers. They suffered long lines at midnight, just for the chance at a close encounter of the shrinkage kind in that memorable hall slime.

Eager to make the best of an uncomfortable situation, my partner and I ventured into the thousand-year-old city the next morning, hoping to discover a treasure to justify our stay at the POW camp. Our ill-fated tour began at the Emir’s Palace. The enormous mud-walled complex was impressive, right down to the brightly uniformed soldiers in plumed hats who guarded the gate and blocked our entry. However, the Palace was for ‘locals’ only-or by special invitation.

We wandered to the Gidan Makama Museum next door, trying to satisfy our curiosity about the local architecture. Built in the 1400s, it allowed us a rare chance to inspect the fascinating local adobe construction from the inside out. After a photo capsule view of Kano’s role in West African history, we ambled past the Palace to the adjacent Central Mosque that could hold over fifty thousand Muslims at prayer. But that, too, was closed to non-Muslims.

Following a brief stop at the colorful outdoor dye pits, Cheryl and I set off to explore throbbing Kurmi Market before the heat of midday became unbearable. With its thousands of stalls, Kurmi was reputed to be the largest market in all Africa. Surrounding us were row after row of dazzling materials and batiks. Twenty of thirty shops featured hand-carved statuettes, trading beads and dazzling gold and bronze jewelry. I even spotted an impressive crocodile briefcase complete with spines down the front. 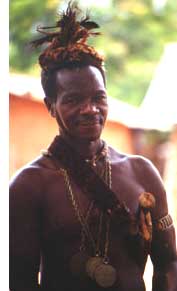 “However, they refused to haggle over the price because they were in the midst of Ramadan – and it was on the endangered list, after all. Eventually, my partner selected some bright red and yellow tie-dyed cloth at one of the many stalls.

A bespectacled little man measured her and immediately set his antique sewing machine whirring. Moments later she had a hand-tailored skirt and matching top. The material’s bright yellow and aqua bull’s-eye set squarely on her backside. Hypnotically, like some pulsating Cyclops’s eye, I secretly chuckled as it winked and swung back and forth as she walked.

The only positive thing about our campground was its proximity to the air-conditioned hospitality of the hotel bar. In the hottest stretch of late afternoon, we made it a point to retreat to the pub for a brew and opportunity to chat with the locals. For once, prices for locals or foreigners were identical.

That particular afternoon two Nigerians joined us, one from Kano, the other from outside Lagos. Robert worked for the local utility company and was the epitome of modern Africa. In neatly pressed shirt and slacks, he might have come from Detroit or Atlanta, except for the impressive set of facial scars running across both cheeks. The other man, Amos, was a businessman from the south. Dressed in the traditional kaftan, he also had raised scars running diagonally across his cheeks like a set of cat’s whiskers.

Of course, they were more than a little curious about where we were from, what we did and why we were in their pub. We shared their curiosity, wanting to discover as much as we could about their life in Nigeria.

“Though Amos and I are from de same country, you know, our ways are ver-ry different,” Robert immediately pointed out. “North and south Nigeria are like two separate countries.”

“Well, your scars are very different.” I pointed out. “What do they mean?”

“They’re tribal. We can recognize other members of our tribe wherever we see them throughout Africa. See him?” He wagged a finger at the waiter. “I can tell he’s from my tribe.”

“They are also for beauty,” Amos added, “Like tattoos.”

“Our languages are very different too,” Robert said. “I speak Hausa and can hardly understand dis guy!” he joked pointing at Amos.

“Yea, I can’t stand to eat fish.” Robert grimaced at the thought.

“Ah, it’s the best. Better than what you call food. And another ‘ting, since we’ve started, I cannot stand the dryness here. I miss the ocean,” Amos mused.

Their good-natured rivalry continued all afternoon. Although we initially steered a wide berth around political discussions, without much coaxing, they spilled their sad tale of Nigerian life and how much had changed since the 1970’s glory days. With fat oil revenues, the economy had boomed. Vast new highways were constructed.

Bridges were built and there was prosperity. After the slump in oil prices in the ‘80s and political problems, the economy took a tailspin. Now, there was no way to support the roads and utilities that had been built. Blackouts, water outages, and interrupted phone service were commonplace. Sleek freeways suddenly ended in mud paths, and travel to Western countries, once frequent for businessmen, was practically unheard.

Both admitted the surging population was part of the problem and would only continue to make a bad situation worse. Once in five Africans lived in democratic Nigeria. Within thirty years, it would become the world’s fourth-largest nation.

“What do we do den?” they wonder in unison.

Buy This Book From Amazon