Social Distancing along the Loneliest Road in America

Road trips offer up salvation.  In fact, they’ve always provided me with a revitalized spirit and healing therapy.  However, during this somewhat fraught moment for American society, travel has been helplessly caught on a frail seesaw pivoting between health concerns and economic resuscitation.

Feeling much like a relieved lunar explorer, I recently returned from a 2,000-mile highway odyssey attempting to discover the fragile terrain between our country’s largely contentious cultural frontiers.

Out here in lockdown-restricted, mask-centric Hollywood, the mere idea of gingerly venturing from my California abode into the relaxed, almost obliviously carefree open stretches of the nation’s least populated regions were at once daunting and exhilarating.

As a decades-long travel journalist, I felt compelled to investigate these boundaries and attempt to decipher the looming tectonic stresses in our nation’s cautious efforts at reopening.

However, as an adventurer and photographer who has authored eight books about travel explorations throughout the United States and around the world, I was equally beckoned by some of those last nooks and crannies that I had yet to uncover.

Still, as a husband and an incurable romantic hoping not to interrupt a thirty-three-year-old tradition of celebrating our anniversary in wild and eccentric lodgings (the actual subject of my first published book), my obsessed goal was a giant Idaho potato you can sleep in.

During a window of relaxed restrictions, we slipped into our garaged rubber-wheeled space capsule and set course for the desolate Eastern Sierras.

While the Hollywood skyline receded in our cracked rearview mirror, bass-inflected hip hop radio morphed into wailing country music stations before again being displaced by earnest religious preaching and finally losing altogether even the faintest hint of an FM signal from anywhere.

From an auditory standpoint, it felt like we were traveling back in time.  In fact, I was hoping to schedule an appointment with earth’s most ancient survivor, a contorted, breathing witness to an early Bronze Age epoch that dates back way before construction of the pharaoh’s pyramids in ancient Egypt.

Punching through patches of snowdrifts en route to a mystical 12,000 foot-high grove populated by earth’s oldest living creatures was an exhausting enterprise for our aging, two-wheel-drive Volvo.  After approaching the Patriarch Grove, a two-legged sprint built hiking momentum up steep, slippery slopes just as the sun was sinking, so I could photograph gnarled, ancient bristlecone pines struggling to exist at that altitude.

All this trekking and mountain fatigue ought to have completely solved the evening’s problem of restless sleep at the reputedly haunted Clown Motel in Tenopah Nevada, said to hold the world’s largest collection of costumed jesters and dubbed Creepiest Motel in America.

For decades, I’d been quite used to sleeping like a baby in unsettling surroundings, but at 4:03 am I began levitating and our bedroom started to rock and roll as I prematurely experienced those tectonic jolts that I thought I’d find elsewhere.

I first suspected that the violent rumblings shaking me awake were from a cataclysmic event in distant Los Angeles, but soon learned from CNN that the 6.5 magnitude earthquake we were experiencing had actually found its epicenter a mere stone’s throw from our bedroom here in Tenopah.

Roads Closed Due to Cracking

Roads into town were all closed due to cracking, but television reporters soon managed to find their way to our dwelling. Fortunately, only one framed clown had somersaulted off the wall in the motel’s colorful museum.

Already by the first daybreak of this trip, our obsession with hand sanitizers and alcoholic wipes was beginning to feel more trivial in nature relative to the larger picture of seismic shape-shifting and multi-millennium survival.  So, we made our first tentative foray in months into an actual restaurant.

Unlike us, the local patrons were maskless. Food portions were obesity-level huge, so we doggy-bagged our remainders, a good practice for long-distance pandemic travel through the desert.

Traveling north, a vast, forever stretch of blurred juniper and sand blown tumbleweed raced by us before we eventually reached our intersection with US 50, long known as the Loneliest Road in America.

We turned right and headed eastward.  Before us, the mirage-etched asphalt ribbon traversed yet another interminable prairie scape, hemmed in by distant mountain ranges. The roadway stitched together only a handful of tiny towns during its advance across the state’s hundreds of unpopulated miles. In between those few three-block-long downtowns, a 360-degree scanning of the horizons yielded not a single residence or man-made object. Looking straight ahead, the road held only the vaguest promise of some future destination.

Finally in Austin, Nevada we found what seemed to be the only food option at the incongruously named International Cafe. Through creaky swinging doors, we were met by the suspicious proprietress of an empty saloon.

Her icy stare at our masked faces and clipped, one-word answers to our queries revealed, without doubt, the folly of any dining attempt.  For a brief time, we felt the shameful stigma of being seen as one of those paranoid big city folks with all their super fancy medical overprotection, but that feeling quickly faded.

Just down the street, we were greeted unexpectedly by an enthusiastic welcome of friendly locals tailgating atop their dusty, strategically parked pickups. Each villager seemed primed to entertain themselves with the sight of any passing vehicle foolhardy enough to drive these parts with an out of state license plate.

They were excited to direct us to Spencer Hot Springs, a cluster of steaming, mineral-rich pools populated by a blissed-out cadre of naked super soakers marinating amongst muscle-soothing 106-degree waters.

These animals for more than a century and a half were seasonally herded through the harsh valleys of Nevada’s Great Basin by hardy Basque shepherds whose families back in the nearest town established unassuming rustic hotels and boardinghouses.

The remote hostelries soon became centers of Basque festivities and communal dining events.  One such remnant of the state’s pioneering past can be found in Elko’s small business district, our epicurean destination for the evening.

The historic Star Hotel’s glowing red neon beckoned a larger crowd than our quarantined sensibilities were comfortably prepared to handle. Navigating a lively bar scene of bobbing cowboy hats, we were ushered into a newly reconfigured dining room.  Tables were distanced but showered with plentiful spreads of traditional lamb-centered dishes, soon devoured beneath stuffed elk heads and wicker paletas, which are sporting implements used in traditional Basque jai alai games.

A one block, neon-lit walk away, we checked into the venerable Stockmen’s Hotel, whose lobby featured pandemic-appropriate barriers to the segregated casino and public facilities.

Our room may have featured a flat-screen TV, but our bedding was efficiently rearranged with our own supply of sheets, pillows, and sleeping bags, and our bedroom before too long was adorned with a dreamy array of household Lysol products and disinfectants.

Known for hosting the renowned National Cowboy Poetry Gathering, Elko publishes a daily newspaper that I managed to snag before leaving town.

As we hit the road, my wife Lori read to me about the Tenopah earthquake that was felt as far away as Salt Lake City and San Diego.  Soon zeroing in on our surprise anniversary lodging, I in turn regaled Lori with a review of our previous celebrations.

For decades, we’ve commemorated our marital milestones sleeping in windmills, lighthouses, cabooses, and submarines.  It might seem a tad disturbing, but we’ve snoozed soundly in bank vaults, fire lookout towers, caves, and treehouses.  We’ve laid our head in giant shoes, three-story-tall dogs, six-story high elephants, and even inside of a nest.  Entering Idaho, it was only a matter of minutes before Lori unearthed the truth about this year’s hideaway.

While we headed down a particularly untraveled, straight as a ruler roadway, I could feel the excitement growing.  After motoring past pancake-flat potato fields sliced by rusting railroad tracks, I could at last spot our long-awaited target.

As we closed in on the final few hundred yards before our lodging, an ever-enlarging potato loomed above the valley floor like an agricultural hallucination.

Lori has for years been acclimatized to my often half-baked ideas, but I aspired to prove this particular experience as being fully baked.

A luxuriously appointed mini-spa was cleverly fitted into an adjacent water tank a few steps away in the yard, featuring a hot tub fashioned from a circular horse trough.  After brushing Dolly, the resident cow, we returned to our cozy sack, enjoying some karaoke moments singing to Glen Campbell’s Wichita Lineman as a vinyl disc spun away on their portable record turntable.

Before bedding down in our vegetarian colossus, we watched as our celestial ceiling filled with stars while a distant freight train announced its unmistakable presence with a mournfully wailing horn.  The diesel locomotive seemed to struggle along iron tracks, dragging its lengthy load into parts unknown.

Great Distances of the West

Reminded of the great distances separating our vast American west, I became even more cognizant of the astonishingly diverse nature of our nation and the separate realities they spawn. That makes plain the difficult challenges just ahead as the country attempts to reconcile an accessible path through this viral moment and across these troubled times.

Racing home on Interstate 15, just skirting the edges of downtown Las Vegas, the customary billboards lining the highway and touting magic shows, big-name acts or upcoming conventions had all seemed to mysteriously vanish and appeared to be replaced by a barrage of injury attorney ads, touting a steady legal hand prepared for any manner of upcoming harm.

These messages seemed to amplify the nervous apprehension of a nation poised for worst-case scenarios.

Still and all, my newfound adventures on the road renewed my sense of wonder at the world around me and reestablished my hope for more healing societal opportunities as we slowly climb out of our cocoons.  In the meantime, we gorged on the leftover barbecue, tater tots, hash browns, and the mashed innards of Idaho’s proudest crop.

With the radio once again picking up smooth SoCal rhythms, and our hair whipping furiously in the wind during our final, speedy journey home, I just couldn’t help but feel a promising, but perhaps distant, rejuvenation somewhere over the next mountain range and at the very least a few exits before the end of the road. 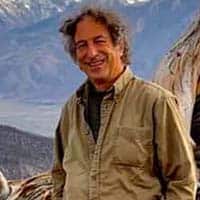 Peter Guttman is an award-winning travel journalist, author, photographer, TEDx lecturer and television personality, who has been honored with a Walter Cronkite Award for Excellence in Exploration and Storytelling, was three times named the recipient of the Lowell Thomas Travel Journalist of the Year Award from the Society of American Travel Writers, and created the iPad’s very first number one bestselling travel app, Beautiful Planet HD.  @peterguttman

Read another story by Peter Guttman on GoNOMAD:

What a Famous Photographer Sees During Lockdown

A Packing Primer: What, What Not to Bring