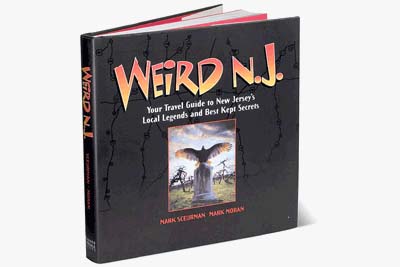 Weird N.J. is filled with interesting stories about New Jersey that people may or may not know about. These stories include unexplainable phenomena, ancient mysteries, roads less traveled, and many other odd tales that sends chills up your spine. You may even need to sleep with a nightlight! However, there are stories that make you laugh and others that make you wonder.

Mark Sceurman and Mark Moran both compiled a fun guidebook to engage in with the wonderfully put legends and complementary photographs. For those who want to learn about a place with easy reading that will amuse you, Weird N.J. is a great choice.

Below are short pieces from different sections of the book that will give you a good idea of what it entails. In addition, the following link will land you onto the authors’ website filled with more information and weird stuff.

The house has been condemned for years, and the reason it’s standing is still a mystery. Supposedly a Mr. Dempsey and his family lived there. One Halloween, Mr. Dempsey lost it and killed his whole family. After realizing what he did, he hung himself from a tree in the middle of the street at the end of his property. All the kids on Halloween thought his body was just a decoration. Little did they know until daylight that it was his corpse. Some say at night you can still see the noose hanging from the tree.

Legends of the Blue Hole

One of the most storied sites in all of southern New Jersey is a mysterious body of water known as the Blue Hole. Located deep in the Pine Barrens of Winslow, on the border of Camden and Gloucester counties, this small but legendary pool is said to not only be bottomless but also to be a frequent pit stop of the Jersey Devil.

Though its icy blue-tinged water might seem inviting, especially on a hot summer day, locals warn their children to stay away from the Blue Hole and to never go swimming there. Tales of unexplained whirlpools that suck down hapless swimmers have long been part of the hole’s lore. Some who have been lucky enough to escape its clutches have claimed that they actually felt something, perhaps the Jersey Devil himself, pulling them down into the chilly depths.

The bottom of the Blue Hole, if indeed there is a bottom, is said to be made of a fine sand, sometimes referred to as sugar sand, which locals liken to quicksand. When we visited the notorious hole, we found ourselves navigating through narrow pineland trails made up of this same treacherous sand. Sure that at any moment our Jeep would get hopelessly bogged down, we decided to ditch the vehicle and continue our quest on foot.

Stones Falling from the Sky

Billy Tipton seems to have a problem that follows him around. While he was living in Spokane, Washington, stones were falling on his home from August 30 through September 6, 1977. At least one hundred and fifty stones had fallen on his home and the surrounding property. The Spokane police were baffled. A few rocks fell on Tipton’s roof as police officers were on the scene investigating. The conclusion was that it was impossible to determine where the rocks were coming from.

The following year, Mr. Tipton moved to Hazlet, New Jersey. In June of 1978, rocks and concrete debris fell on his home for twenty consecutive days, damaging windows and cars along Elm Street. Police took into custody a youth who was found throwing pebbles at Tipton’s garage door, believing he was working with other juveniles in the rock tossing, but the boy was later let go when it was discovered that the rocks thrown upon the house were five up to pounds and appeared to be coming straight down.

A Bigfoot-like entity has been seen in the regions of Somerset County, from the Great Swamp area and the Somerset Hills to as far away as Hillside. According to eyewitness reports, he stands about eight feet tall and is covered with hair the color of a deer’s. The locals call it the Big Hairy Man.

He walks upright like a human according to a bone specialist and a physical therapist who encountered the Big Hairy Man while taking a shortcut through the Great Swamp on Lord Stirling Road in a hurry to reach the airport.

They claimed the Big Hairy Man walked in front of their car and hopped the fence alongside the road. They could not see his face, because he (or it) was looking down. These sightings, according to the Folklore Project in Bernardsville, have occurred for many years.

Located in the Evergreen Cemetery in Hillside is another impressive black-and-gold memorial. This commemorates a legend of the music world who nobody seems to have ever heard of – Singin’ Sam Stevens. The multi-pillared monument is adorned with music-related motifs, including a larger-than-life Gibson electric guitar, music notes, and a giant record listing all of Sam’s greatest hits – which again, no one has ever heard.

Beneath the records are the words Singer, Song Writer, Peace Maker. The tribute looks very much like one you might expect to see at Graceland to immortalize the King of Rock ’n’ Roll, but here it sits on Hillside, an homage to a lesser-known musical icon.