New Orleans During the 2020 Pandemic

New Orleans: From the Masses at Mardi Gras to a Ghost Town

In a city with a 300-year old history like New Orleans, stories of ghosts are everywhere.

After the sun sets each evening, Royal Street in the French Quarter is jam-packed with groups huddled together to hear tour guides tell tales of historic, haunted landmarks.

Ghosts are commonplace, but the portrayal of New Orleans as a “ghost town” is not.

Until recently, when New Orleans, along with the rest of the world, shut down due to the Covid-19 pandemic.

Two weeks prior to the shutdown, my life was filled with the energy and excitement that is known as the Carnival season in New Orleans, a positive contagion that infects tourists and residents alike.

My husband Jim and I moved to New Orleans one year before, so this was our 2nd official Mardi Gras, and I was ready.

By 8 a.m., I was in costume sitting at my neighbor Meghan’s kitchen table, getting glitter painted on my face to match my turquoise wig and 80s rock star jacket.

A lawyer by trade, Meghan also happens to be an expert at painting on glitter and she easily makes the switch to carnival party-goer with her glitter skills and signature pink wig.

It was her suggestion that I go for the blue wig to match my eyes.

Something about New Orleans culture changed my view of costumes. Rumor is that you’re not a real New Orleanian until you have a full costume closet.

Before I settled on the blue wig, I spent hours trying on various wig lengths and colors at costume stores throughout the city.

It’s an important decision… So for the first time ever, at 39 years of age, wearing a costume was fun and unifying, a feeling of being part of the community.

On Mardi Gras day, each neighborhood has its own tradition. On one side of town, the Garden District, there are the talked-about headliner parades, the Krewe of Zulu and the Krewe of Rex, the King of Carnival, which follow the traditional parade route down St. Charles Avenue into the Central Business District.

I don’t go to those. I’m partial to the St. Anne walking parade, which begins at a locals bar called Mimi’s in the Marigny and proceeds down Royal Street from the Marigny into the French Quarter.

The Marigny is the neighborhood I live in and I love it. Colorful and eclectic, it has a large array of 19th-century architecture and an equally large collection of dive bars.

On Mardi Gras day, there is sparkling energy in the city, like a firework that’s about to burst up into the sky. 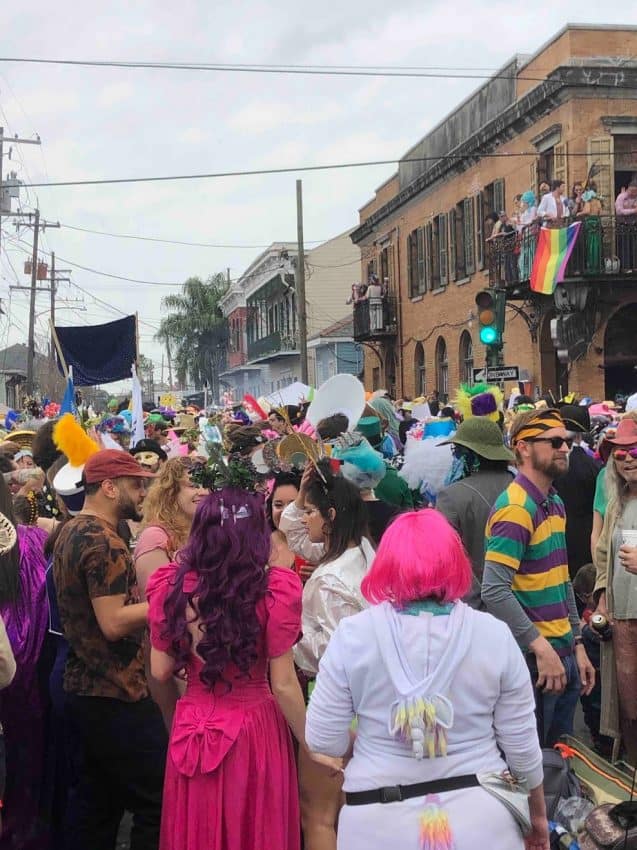 This was my world pre-“social distancing”. Mardi Gras is more like social nearness, connecting with friends and strangers, and sharing in the celebration together.

We watched the St Anne parade pass by, then we joined it. From spectator to being part of the show.

The morning and afternoon sped by too quickly, filled with lots of socializing, celebrating, and a little drinking.

In 3 hours, we had moved about a half-mile down the street. In another 3 hours, we walked a distance of one total mile, and settled outside of Lafitte’s Blacksmith Shop on Bourbon Street, built in the early 1700s and “reputed to be the oldest structure used as a bar in the United States.”

It made no difference we had only ventured about one mile from home. There was never a dull moment. It was overstimulation in every sense of the word.

By mid-afternoon, I was tired. In hindsight, had I known how the world was about to change just a few short weeks into the future, I may have stayed out a little longer, and grasped onto it for every last second.

Instead, I walked back home and collapsed on the couch, and smiled as I recalled the day’s activities.

I longed for a little peace and quiet.

The Party Is Over

Peace and quiet came. Not a little, but a lot. A whole lot. The COVID pandemic shutdown.

New Orleans quickly became one of the U.S. “hot spots”, much of what was later blamed on the result of all the carnival parades and Mardi Gras celebrations and gatherings of large groups.

The atmosphere in the heart of the city was now like the set of a horror movie before the evil monster appears, a scene of eerie quietness that made me feel uneasy.  In the 13 months since I moved to the city, I had never seen stillness like it, particularly throughout the French Quarter that’s normally filled with people.

There are businesses here that rarely ever close, including some 24-hour bars on Decatur Street and places like Café du Monde for beignets, a New Orleans specialty that’s deep-fried and smothered with powdered sugar.

One day after the mandatory shutdown was announced, it was March 17th, St. Patrick’s Day. I thought back to what I was doing this exact time one year earlier.

Jim and I had cycled over to the Garden District and stopped to have a Guinness at a bar along the parade route.

The St. Patrick’s Day parade was in full swing, and we sat people-watching, amused at the free throws coming from the floats. Beads, as usual, but also cabbages and potatoes.

On St. Patrick’s Day 2020 I walked alone through the French Quarter with a million thoughts going through my head about what New Orleans would look like when this pandemic was over.  Would tourists come back? When would I see the French Quarter again as I knew it? How would these businesses that all have to close make it through this time?

New Orleans subtropical climate is sticky hot and humid for six months of the year, but New Orleans in March is beautiful with low precipitation and average temperatures of low 70s.

This mild and pleasant weather lasted throughout the core months of our shutdown and helped me to stay positive amidst hearing all the news of deaths and the spread of the virus.

Day-by-day, I became used to the quietness and even found ways to appreciate it.

I never had the opportunity to go for a leisurely bicycle ride down Bourbon Street before.

Never before could I get an absolutely stunning picture of Jackson Square and St. Louis Cathedral without hundreds of tourists in the picture.

Never before could I watch the sunset from my rooftop in silence.  Usually, any resemblance of silence was drowned out by the booming sounds of brass bands and tourists engaging in loud, drunken conversations while bar-hopping on Frenchmen Street.

With businesses closed and boarded up, Frenchmen Street was now silent.

But that didn’t stop the music nor the art and creativity from emerging.

On every piece of plywood used to board up windows of the closed businesses, artists created new work. Some sad, some inspiring images and messages of hope.

Following the river east away from Frenchmen Street, in the adjacent Bywater neighborhood, a massive wall mural was created by artist Brandan Bmike Odums (Instagram: @bmike2c) commemorating all the recent graduates who were denied graduation ceremonies and parties.

On my morning runs in Crescent Park, a 1.4-mile park adjacent to the Mississippi River, there was always one musician stationed there every morning around 7 a.m.

He’s dressed in a nice blazer and hat and brings a folding chair.  Daily, he practices songs on his funny looking instrument. I learned this instrument is called the Melodica, a cross between a harmonica and a keyboard that you blow into to play.

In May, as social distancing restrictions began easily slightly, I ventured into the French Quarter at the recommendation of my friend John Brouillette, who invited me to stop by and watch his neighbor play the clarinet. Turns out that his neighbor is Tim Laughlin, a famous jazz musician.

Of all places in the world to be sheltering-in-place, I’m fortunate to be here in New Orleans.

The personality and energy of this city and its people shine through. Whether it’s a hurricane or a worldwide virus, the people of New Orleans prove their resilience. 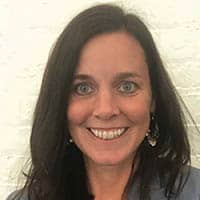 Tanya Birch is a Freelance Writer, Beer Industry Consultant, and author of two guidebooks, Discovering Vintage Philadelphia and Beer Lover’s Virginia. You can find more details on her background at www.tanyabirch.com