How the Pandemic Changed Airport Screening 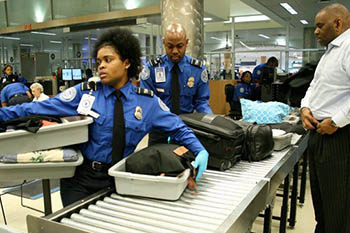 If airport screening had changed because of the pandemic, Gene SirLouis hadn’t noticed, and he’d flown several times since the COVID-19 outbreak.

There were “no health questions, no thermal scans — nothing,” says SirLouis, a manufacturer’s representative from Washington, D.C.

That, at least, was the case until he landed in Austin recently. There, passengers whose final destination was in Texas had to fill out a form for self-quarantining, he recalls. The rest were free to go.

Looking Inside his Mask

“[The Transportation Security Administration] also asked to see the inside of my mask,” he says. “That was a first.”

If you don’t pay attention, you might miss the screening changes. The TSA made several significant adjustments after the outbreak. Other changes were in progress before the pandemic. But the biggest transformation may lie ahead.

“There are many changes that passengers will see,” TSA spokeswoman Lisa Farbstein says. The agency now allows passengers to carry up to 12 ounces of hand sanitizer in a carry-on bag. To reduce the risk of infection, they must hold on to their boarding passes instead of handing them to a TSA agent at the travel document podium.

Lowering the Mask During Screening

Wearing a mask is permitted during screening, but you may need to lower it to help verify your identity, or if it is a military-style gas mask that may conceal something.

Screeners are wearing face masks and practicing social distancing. And if travelers have prohibited items — such as liquids, gels or aerosols in quantities greater than 3.4 ounces — they’ll have to return to the divestiture table “outside of security” with their carry-on bags to remove the items themselves, according to the TSA.

Even before the pandemic, the TSA had been quietly working to fix some of the biggest complaints about screening and airport security. One significant development is the addition of blended lanes at several airports, including Chattanooga Metropolitan Airport in Tennessee and Lincoln Airport in Nebraska.

Until now, having TSA PreCheck clearance hasn’t made a difference at smaller airports without designated PreCheck lanes, because everyone has been screened the same way. In the blended lanes — which do PreCheck as well as regular screenings — members of the TSA’s trusted-traveler program receive full program benefits, such as faster screening, being allowed to keep liquids and gels in carry-on bags, and being allowed to leave their shoes, belts and jackets on.

“TSA PreCheck can get the benefits of the program even if the airport doesn’t have a dedicated check-in point,” says Gabe Turner, a director for Security.org, a safety website.

There’s another recent change that could affect you this summer: The TSA has started to screen food more closely, according to many travelers.

“Solid food and snacks are still allowed, and agents aren’t making the request 100 percent of the time,” says Molly Fergus, the general manager of the travel site TripSavvy. “Just be prepared to open up your bag for the screening inspection if you’ve packed a nice plane picnic, and make sure to check the list of what you can bring on board.” The TSA publishes a list of allowed foods on its site.

The TSA confirmed that, in mid-June, it will begin asking passengers to remove carry-on food items from their bags and place them in a bin for separate screening. The agency will recommend packaging food in a clear plastic bag.

Why is this happening? “Food items often trigger an alarm during the screening process,” Farbstein says. “Separating the food from the carry-on bag lessens the likelihood that a TSA officer will need to open the carry-on bag and remove the food items for a closer inspection.”

In what may be the biggest change since the introduction of full-body scanners, the TSA will begin enforcing the Real ID requirement starting Oct. 1, 2021. Late last summer, TSA agents began warning travelers who presented regular driver’s licenses about the change. In March, the government moved the enforcement date from this October to next year because of the pandemic.

You Don’t Need Real ID Yet

The Real ID Act, passed by Congress in 2005, requires that state-issued identification, such as a driver’s license, meet federal standards if used for commercial air travel, among other purposes. But you’ll be able to fly without the new type of license. The TSA only requires that you verify your identity. There are 15 alternatives to a Real ID-compliant license, the most common being a U.S. passport.

As for health screening, they are still evolving. “As travel begins to pick up, airport screenings will be of the utmost importance to avoid further spread of covid-19,” says Robert Quigley, the regional medical director for the Americas at International SOS, a travel security firm.

“Travelers can expect to be responsible for additional requirements to navigate through the airport. That includes mandatory personal protective equipment, temperature checks, social distancing, and even more security checkpoints.”

Frontier Airlines began screening passengers for covid-19 this week. On Monday, the carrier announced that it would start checking all passengers with touchless thermometers before boarding. Passengers with a reading of 100.4 degrees or more will be denied boarding.

“They can rebook, receive a credit or get a refund,” airline spokeswoman Jennifer de la Cruz says. “It’s their choice.”

In the coming weeks and months, airports may limit access to their terminals to passengers only, says Bruce McIndoe, founder of WorldAware, a risk management company.

“There will be some level of disinfecting baggage along with normal security checks,” McIndoe predicts. “And there will be fit-to-fly checks — thermal checks, general health checks, and possibly actual virus tests. These will be crude out of the gate, but just like the ramp-up of security checks post-9/11, they will become more sophisticated.”

McIndoe sees a not-too-distant future in which health screeners might even administer CT lung scans before allowing passengers to board.

In the meantime, passengers are relying on tried-and-true methods for getting through security faster. Jon Courtway wears a multi-pocket vest when he travels, which eliminates needless fumbling for keys, loose change and electronics.

“I empty my pants of everything, and it all goes into vest pockets — even the mini iPad — and it goes through the X-ray machine with my shoes and liquids,” says Courtway, a retired state employee from Sacramento. “I always wear a nonmetallic belt and don’t have to take it off, unless I get a real uptight TSA agent.