What is the Future of Travel Post-Pandemic?

How are people feeling about Travel in the Future?

By Veronica Moore and Matt Martella

Whether it be flying across the country or driving to the grocery store, COVID-19 has made all forms of travel potentially dangerous for the foreseeable future. Although things will eventually get better, what remains uncertain is when will people feel safe leaving their homes again.

How have your views on Travel Changed? 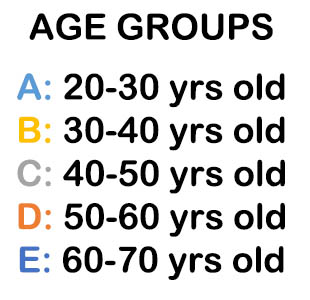 For this question, about 33% of people answered that they were either severely restricting or canceling all their plans to travel for the foreseeable future. The two age groups that predominantly had this response were people in their 20s (26%) and people aged 60 or older (31%).

People aged 60 or older were mostly answered that they had no plans for traveling in the foreseeable future (36%). 20% of this age group said their views of travel were completely unaffected by the pandemic and 30% said they will only be traveling by car.

33% of people in their 20s said that they are open, but they will be more aware of their personal health and more up to date on sanitary guidelines. 20% said the pandemic has not affected their views of travel at all while 13% said they would only be traveling by car and 34% said they had no plans for any kind of travel.

A participant in their 40s says “I’m reconsidering large crowds now. We have canceled our current Disney trip for 2021.” Some other people have very specific changes to their views on travel, like a 60-year-old participant who says “I won’t fly economy ever again,” and a 73-year-old avid traveler who says “Biggest change: We spent 3 weeks in Europe last fall. Now? I don’t plan to travel further than the supermarket any time soon. And I’m going there only when I have to.”

Since flights will be cheaper than ever, when will you feel comfortable flying again? 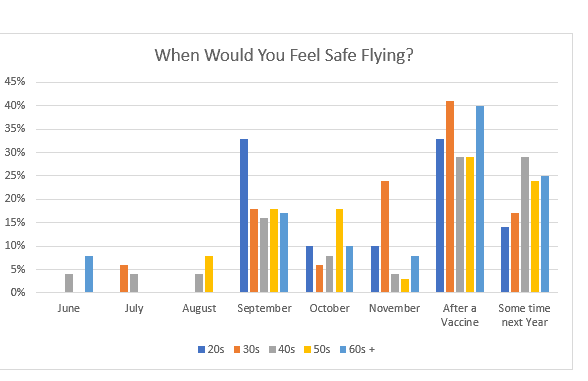 Many people in the 20s age group said that they would fly again come September (33%), but no one in this group was willing to fly any month before it. In the 30s and 40s age group, most participants were unwilling to fly until either 2021 or when a vaccine is released. The 50s and 60 + age groups were more optimistic about getting on an airplane later in 2020.

A 21-year-old participant is not taking any chances with traveling, saying “Once the WHO and CDC confirm that it is safe to do so, as in it is not being actively already and a vaccine or some form of preventative measure is available to tackle current and (hopefully) future strains of COVID.”

While some people are prepared to wait long periods of time before they can fly again, a 63-year-old remains optimistic, saying: “I’m still holding out hope for Scotland in June.”

Would you feel more comfortable flying internationally or domestically?

When would you feel comfortable staying at an Airbnb?

This question received a variety of responses from both ends of the spectrum. Each age group either felt more comfortable going to an Airbnb between the months of August and October, or preferring to wait until next year, until a vaccine is released, or never again. No one from any of the age groups said they would start considering going back to an Airbnb in November or December. 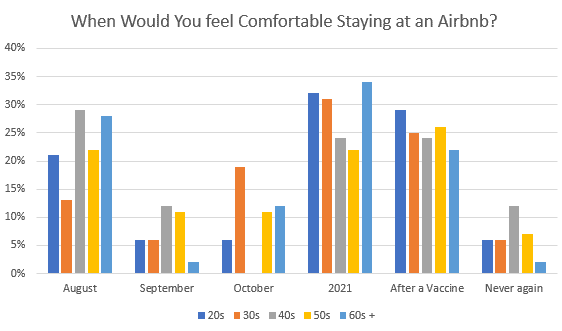 When would you take an Uber?

When considering that a lot of travelers will be opting for road trips over airplane flights, traveling by car will likely be more popular than ever before once the quarantine is lifted.

When would you go on a cruise?

The following question is more optimistic, the majority of the responses stated that most people would be comfortable renting a car on their next vacation as soon as August, the next largest response was sometime in 2021 this response could be explained by the fact that many vacations have been postponed into the following year.

When asked where they would like to go after the quarantine was lifted many said someplace warm or to continue to plan the plans that COVID-19 had taken from them.

One answered, “Minneapolis. A dear friend’s wedding which has been postponed from April 24th.” Another said that they would continue to address postponed plans for a holiday they had planned to Europe.

The survey also contained a question regarding whether or not the responders would be just as encouraged to eat the native food of the places they are traveling to. The majority of travelers said that their willingness to explore food in-country would be unwavering. About 13% said that they would be more cautious about places like wet markets and developing countries and would take it on a case by case basis.

One traveler said, “No, I feel native cuisine is a part of the culture and to slander, it would be insensitive. It was the delay in response that caused the pandemic; any meat can carry disease”

Another, “Nope! As long as the food is cooked and served by healthy people then it’s safe. I could get just as sick from McDonald’s in the US than eating overseas”.

Not every traveler felt this way though, as one responded, “Slightly, I will pay more attention to cleanliness”.