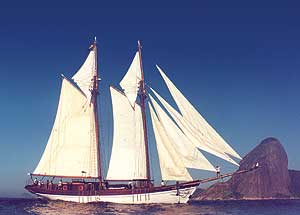 Sailing on sea green waters to white sand beaches where the sun warms the earth in the daytime and the nights provide breathtaking sunsets, snorkeling among brightly-colored tropical fish, climbing mountains and hiking rainforests full of exotic animals, and partying into the night under the stars, are only a small glimpse of what the Brazil Tall Ship Sailing Adventure has to offer.

“The adventurous spirit is what makes traveling on the tall ship so great,” said Jeff Russill, marketing manager of GAP Adventures, “It’s about the feeling of not being landlocked, and being in a vessel that is akin to the ages of great discoveries.”

It’s day one and the sixteen passengers aged 25 to 50, mostly from the UK, US, Canada, or Australia, have just boarded the “Tocorime” tall ship in Paraty, Brazil. The 120 foot ship, stocked with a 320 horsepower Mercedes Benz Diesel engine and 550 feet of sail, received its name from the words “Adventurous Spirit” in the native tongue of the Kulina tribe of the Brazilian Amazon.

Lunch is served aboard the enormous vessel and the ship sets sail for Iihla da Beixiga, a private island where only Tocorime can anchor.

“The menu varies according to the availability of fresh and seasonal supplies, but some examples would be chicken fingers cooked with a mustard sauce, fresh vegetables cooked with salvia butter, wild rice cooked with saffron, typical Brazilian farofa, or roast beef prepared with Mustard sauce,” said the ship’s captain and builder, Marcus Lehman.

Beixiga, one of the 65 tropical islands on Paraty’s Bay, has a perfect view of the historical city of Paraty, known for its gold, coffee and sugar cane liquor. Declared a national monument in 1966, the town’s cobblestone streets and colonial architecture provide the perfect backdrop for the beginning of the trip. Travelers spend the day visiting art galleries, store, churches and museums, enjoying the local rhythmic tunes and dining on Brazil’s seafood specialties. 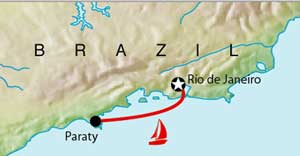 Music is a very important part of Brazilian culture. Paraty is constantly filled with the sound of various types of music.

“In Paraty there is always a large variety of musical possibilities ranging from the famous Brazilian rhythm of Bossa Nova, to the Chorinho (a slower and more sensual samba jazz), to the mixed rhythms of samba reggae (a distinct Brazilian fusion), to local jazz interpretations. Music is often played in cafés, and night spots, but is very frequent in street performances and street corner improvisations,” said Russill.

Travelers enjoy the evening in Paratay, which Russill describes as, “alive with the reminiscence of past glory, a very laid back and antique feel comes over the dimly lit cobblestone streets at night,” he said. 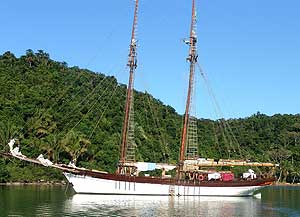 The next morning, passengers wake up to a Brazilian tropical breakfast, and are free to roam the island before the boat sets sail for the Ecological Reserve Mamangua. Some passengers, like Russill, choose to find their own breakfast.

He said, “We jump off the side of the boat, swim to a deserted white sand beach on shore, and collect our own enormous bunches of fresh wild bananas… It’s not often in our modern busy lives that we fetch our own breakfast straight from the land, and I’m pretty sure I can taste it in the bananas.”

“Blueshades of water vary as the Tocorimé makes its way along the fjord, the backdrop mountains are preserved by a National Forest reserve while the beachfront is sprinkled with rich chalets and modest fishermen’s cottages,” said Russill, “The arrival to the Palm Tree Cove is a significant tropical experience. There are no cellular phones, no billboards, it’s just delightful.”

Mamangua is a one of a kind travel destination, according to Russill.

“It is an five-mile (8km) tropical fjord, and except for a few small fishing villages, is an uninhabited canyon of deep blue water, deserted beaches, native Atlantic rainforest, and sheer mountains and cliffs rising straight out of the sea. There are no roads to get where we are, and I hope there never are,” he said.

That night, adventurers participate in a late night luau on the beach, “The Luau is a Tocorimé specialty, with the Tocorimé in the moonlit background, the barbeque is lit up, while Brazilian Caipirinhas are served. (These drinks are famous for guaranteeing good times.)

In traditional Brazilian style, barbeque temptations are offered first, before the main dish of fantastic cuts of beef and fantastic fish are served. If we are fortunate the crew will provide a spectacular show of flame throwing. All this with the magic of the plankton lit water inviting you,” said Russill.

“The Grand Island” and the “Blue Lagoon”

The captain sets sail once again, this time to Ilha Grande – Sitio Forte. The diversity of the land makes the island fascinating, from its flat plains to rolling lands to large mountains, the island is quite a view. Visitors participate in a hiking adventure, where they see a wonderful display of exotic animals: parrots, woodpeckers, monkeys, armadillos and even some species threatened with extinction. 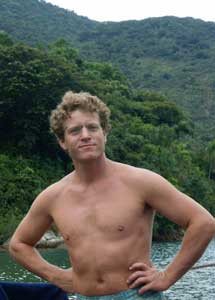 “There are several varying levels of hikes; simple beachfront hikes taking you from one beach to another, moderate incline paths, which deliver you to secluded waterfalls, or more determined treks which bring you to the top of the world and allow spectacular views of the regions sailed and conquered,” said Russill.

The island’s sea planktons show off their fluorescence at night, “As we are sailing, we notice the plankton as they react with the motions of the forward moving hull, though the best is in the calmness of the bay or cove when we go swimming in the evening and make sea angels or imaginative figures with the motion of our arms, legs and head,” Russill explained.

While the trip is now half over, the excitement is far from done. The ship docks on the forth day at Lagoa Azul, or “Blue Lagoon.” Here, travelers get to experience snorkeling in the clearest, warm, sparkling waters.
“Lagoa Azul, just as the ‘Blue Lagoon’ name suggests, has calm waters, and is deep in the middle with shoreline reefs and corals. The varying shapes, sizes and colors of the fish leaves you with a sore neck, sea-urchins and starfish, are amongst the many other attractions to be seen,” Russill said.
After a day full of experiencing the waters, travelers relax aboard the ship, or by the romantic, glittering waterfall. For those with extra energy, instead of riding the ship to its next destination, a two-hour hike is available to Saco de Ceu.

Beaches, Sunsets and the “Pirates Raid”

The next morning, it’s on the water again to Enseada das Palmas for more swimming, hiking and snorkeling. After lunch, the group takes an excursion to the famous, Lopes Mendes Beach, where they spend the day and watch the sun set at night.

“Lopes Mendes is a paradise amongst the beaches of the world; imagine Copacabana before the arrival of the Portuguese in the 15th Century and you will have a picture of Lopes Mendes. The sunset is at the extreme west end of the beach, mingling the atmospheric changes into a kaleidoscope of colors which never repeat themselves. The breeze is crisp, salty and inspiring, the waves tumble in, as playful children in some parts, and in others they roar like the thunder of doomsday!”said Russill.
Once the sun is down the “Pirates’ Raid” beach barbeque and party begins, “The Pirates’ Raid is the Tocorimé’s way of saying ‘We came, we saw and we conquered.’ There just might be a few hangovers to conquer thereafter!” he joked.

When the clock strikes midnight the boat resumes motion and 12 hours later passengers are greeted by the striking views of Rio de Janeiro and the Brazilian coastline.

Rio de Janeiro, also known as “The Marvelous City,” is one of the most densely populated places on earth. “It is full of life; an eternal running engine of people, buses, cars, the mingling of pedestrians, the smells of the asphalt, beach, and sea, all blending into a sweat aroma which is distinctive to Rio de Janeiro,” Russill said.

“The Cariocas—as the inhabitants are called—thrive on dance, drink, beach, sport and sun,” said Russill.

The boat docks at Marina da Gloria on Guanabara Bay and passengers enjoy their last day on the ship before exploring the town and venturing into the Lapa area, famous for its nightlife.

“Lapa is the Bohemian Mecca of Brazil, for the last five years it has revitalized itself without losing the essence of its decadent and fascinating history. The mixture of beats, smells, races, visions and ideas is like being transposed into a very different reality. The area only starts breathing around 21:00 and continues until morning 08:00. Literally hundreds of bars, nightclubs, restaurants and street vendors offer unlimited satisfaction of every possible want,” said Russill.

Upon waking on the seventh day, the group has its last breakfast together before exiting the ship.They will miss the fully stocked ship, which had bars on board, a large common area, a saloon, and a large sleeping area with four single berths and six double berths, which couples, or two people of the same sex paired together share.

“If you can imagine the era when windjammers were king, she would be queen. She is hand-crafted of Brazilian Hardwood, fascinating in curves of 120 feet, enticing 100 feet rigging and ample in deck space. She is a mistress of the seas. When the sails are set, there is a sense of peacefulness and realization, when the wind picks up, there is a knowledge of adventure and discovery of yourself and the destinations ahead,” explained Russill.

While the ship has plenty of room, passengers should pack lightly and bring small bags to take with them on excursions. The trip costs US$895 and includes all amenities except airfare, spending money, alcoholic and carbonated beverages, and additional excursions. The company provides lists of pre-departure tips and you can call or email G.A.P (Great Adventure People) for further information.